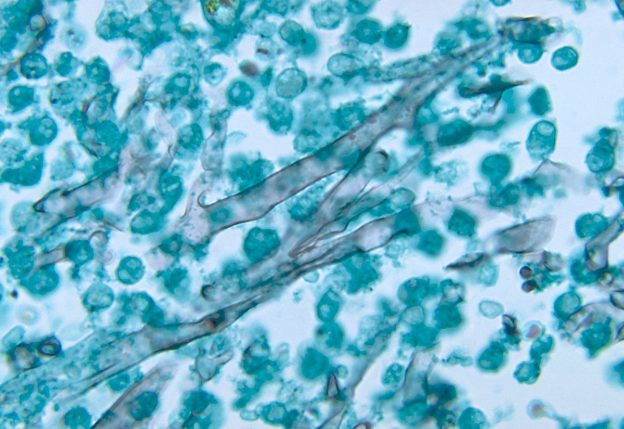 Image: “Histopathologic changes seen in a heart valve due to zygomycosis caused by Mucor pusillus. Using methenamine silver stain, one can detect the presence of fungal elements associated with zygomycosis, including sparsely septate hyphae, amongst a mostly acute inflammatory process with some island of chronic granulomatous inflammation.” by CDC/Dr. Libero Ajello – This media comes from the Centers for Disease Control and Prevention’s Public Health Image Library (PHIL), with identification number #4234. License: Public Domain

Chronic granulomatous disease, as the name implies, is a chronic disorder that is characterized by granuloma formation. This disorder is a consequence of defective phagocytic cells that are unable to produce bactericidal superoxide due to a defect in the nicotinamide adenine dinucleotide phosphate (NADPH) oxidase in these cells.

Chronic granulomatous disease is a hereditary disorder that is equally identified in all ethnicities and races. The current estimated incidence of the disorder is around 1 case per 200,000 per year.

Different hereditary forms of the disorder exist. The X-linked form of the disease is associated with the highest mortality and morbidity. Nowadays, most patients with the chronic granulomatous disease survive until adulthood; however, mortality remains high especially after 10 years of age.

Because the chronic granulomatous disease is caused by an X-linked mutation in up to 66 % of the cases, it is understandable why the majority of the cases are males. The remaining third of the patients usually have an autosomal recessive defect. In this group of patients, male to female ratio is expected to be around 1:1.

The severity of chronic granulomatous disease is variable and might be dependent on the exact type of genetic defect the patient has. Most patients with chronic granulomatous disease present in early childhood with a history of recurrent life-threatening infections, but few cases remain undiagnosed until adulthood due to a milder form of the disease.

Once neutrophils phagocytose bacteria and other pathogens, they increase their oxygen consumption to produce different bactericidal reactive oxidant species. Patients with chronic granulomatous disease lack this normal physiologic response as their neutrophils are unable to produce an oxidative burst after the phagocytosis of bacteria.

NADPH-oxidase enzyme is impaired in phagocytic cells of patients who have chronic granulomatous disease. This defect in the enzyme activity is responsible for the reduced production of the superoxide anion O2-.

The NADPH-oxidase enzyme is actually a complex of multiple units and 5 different proteins. Glycoprotein 91 (gp91), protein 22 (p22), protein 47 (p47), protein 67 (p67) and protein 40 (p40) form the oxidase enzyme complex that is also known as phagocyte oxidase (phox). Mutations in the genes encoding for gp91, p22, p47 and p67 have been previously described to be associated with chronic granulomatous disease. Mutations in the gene encoding for p40 have not been reported so far.

The gene encoding for gp91 is located on the X chromosome and mutations in that gene are responsible for the majority of the cases of chronic granulomatous disease. The second most common mutation occurs in the NCF1 gene found on chromosome 7 that encodes for p47. Mutations in the genes encoding for p67 and p22 are responsible for the autosomal recessive form of the disease and account for approximately 10 % of the cases.

The ability of the neutrophils to kill microorganisms in patients with chronic granulomatous disease is dependent on the type of genetic defect, but also the microorganism involved.

For instance, patients with X91 disease are more likely to have a clinical phenotype that is more severe, compared to those who have the A47 disease. Bacterial organisms that do not produce catalase can be killed by phagocytes in patients with chronic granulomatous disease; hence the risk of acquiring an infection caused by one of these organisms is similar to the general population. 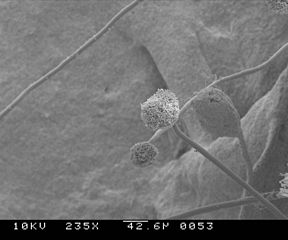 On the other hand, microorganisms that are catalase-positive, such as Burkholderia cepacia, aspergillus and candida albicans, are more likely to be implicated in life-threatening infections in patients with chronic granulomatous disease due to the inability of neutrophils to kill these microorganisms in the patients.

Pseudomonas aeruginosa, despite being catalase-positive, can still be killed by neutrophils in patients with chronic granulomatous disease, which explains why the organism is rarely isolated as the cause of infectious disease in these patients.

Most patients with chronic granulomatous disease are younger than 5 years of age. Patients usually present with recurrent skin infections, pneumonia and gastroenteritis. Osteomyelitis and sepsis can happen in a subgroup of patients who have a mutation that is associated with a severe clinical phenotype. 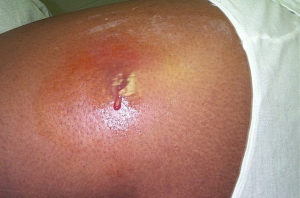 In addition to recurrent infections, patients with chronic granulomatous disease also present with granulomas. Areas of the skin that are involved with recurrent infections are at risk of developing granulomas, which can be palpated and felt as nodular masses. Granulomas can also form in the gastrointestinal tract or the genitourinary tract. If these granulomas are big enough, obstruction symptoms can ensue.

Patients with chronic granulomatous disease are unlikely to complain of constitutional symptoms such as weight loss, fatigue and malaise. Fevers, however, are very common and an infectious focus should always be searched for in any child presenting with a fever before attributing the fever to the disorder itself and not to an ongoing infection.

Once the diagnosis of chronic granulomatous disease is suspected, the first step is to perform a nitroblue tetrazolium (NBT) test. This screening qualitative test can help differentiate between normal phagocytes that can reduce NBT to blue formazan and neutrophils from a patient who has a chronic granulomatous disease which is unable to reduce the colorless NBT to the blue formazan.

NBT test is observer dependent and subjective as it depends on the visual analysis of neutrophils under the microscope looking for neutrophils that form blue inclusions after the incubation with NBT.

Molecular genetic testing and genotyping is indicated in familial cases of chronic granulomatous disease to understand the pattern of inheritance. The number of possible mutations in the gene encoding for g91 on X chromosome is above 300; therefore, individualized genetic testing is preferred compared to looking for a pre-determined standard mutation.

Once the exact mutation is identified in the child, prenatal diagnosis in subsequent pregnancies become possible. A chorionic villus biopsy can be obtained and molecular genetic testing looking for previously identified mutation can be carried out.

Imaging studies are dictated according to the presenting semiology of the child. For instance, a child presenting with a recurrent cough, shortness of breath and fever might need a chest X-ray, or a computed tomography scan of the lungs.

If granulomas form, a biopsy might be performed. Histologic examination of the granulomas reveals necrotic centers with layers of histiocytes and macrophages.

The only curative treatment for chronic granulomatous disease is hematopoietic stem cell transplantation from a human leukocyte antigen compatible donor. Unfortunately, this option usually carries too much risk to be considered as recommended in all patients with chronic granulomatous disease. Therefore, antimicrobial prophylaxis, aggressive treatment of current infections, and the administration of interferon-gamma are the mainstay treatments for the disease.

Trimethoprim-sulfamethoxazole (Bactrim) is considered as the first-line antimicrobial prophylaxis therapy in chronic granulomatous disease. Patients who are allergic to sulfa drugs might receive trimethoprim alone.

Patients who present with an ongoing established infection should receive aggressive antibiotic therapy for several weeks. Discontinuation of antibiotic therapy should be based on the normalization of the white blood cell count and erythrocyte sedimentation rate.

Patients presenting with skin infections should receive ciprofloxacin parenterally. Patients with documented fungal pneumonia should receive voriconazole or posaconazole for up to 6 months. Patients who do not respond to medical therapy or those who develop lung or intra-abdominal abscesses need surgical drainage of the abscess.

Patients with life-threatening infections, such as septicemia, who are unresponsive to conventional antibiotic therapy, should be prescribed high-dose interferon-gamma with or without growth factor administration.

Those presenting with signs and symptoms of the granulomatous disease, without evidence of an ongoing infection, should be given a corticosteroid.

Gene therapy for chronic granulomatous disease is undergoing extensive research and development. The results are very promising in animal studies. The main issue with gene therapy is within the methods of gene transfer which are currently not specific enough to only target hematopoietic stem cells and carry certain risks such as oncogenesis.