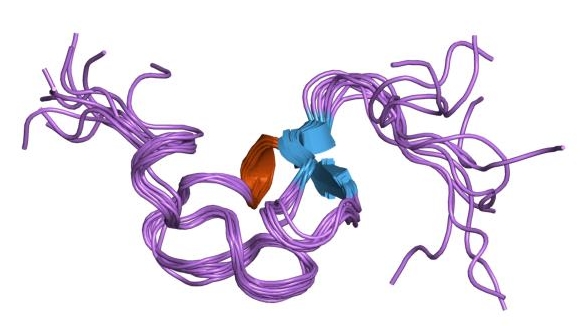 Cholesterol is an amphiphilic molecule, consisting of four nonpolar hydrocarbon rings (A-D), a branched nonpolar hydrocarbon tail attached to carbon 17, and a polar alcohol group on carbon 3. Cholesterol’s polar structure allows it to fit inside the phospholipid bilayer and serve as a membrane fluidity buffer.

Cholesteryl esters are cholesterol molecules that have a fatty acid group attached to the alcohol group at position 3 in the “A-ring.” Esters are more hydrophobic than unesterified cholesterol and appear in bile components. Molecules of this type are too hydrophobic to serve as a membrane fluidity buffer; they are associated with lipoproteins.

Cholesterol is primarily synthesized in

The carbon skeleton that makes up its structure comes from Acetyl-CoA, whether derived from glucose or fatty acid oxidation. Synthesis takes place in the cytosol, and because this is an anabolic metabolic pathway, NADPH serves as the provider of reducing equivalents. 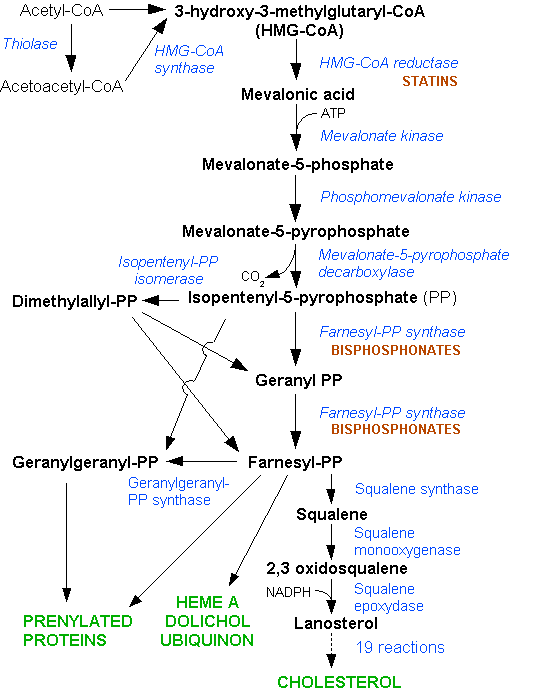 Cholesterol biosynthesis begins with the formation of mevalonate, which takes place in a sequence of three reactions: Thiolase (ACAT), HMG-CoA synthase (HMGCS), and HMG-CoA reductase (HMGCR). In these reactions, CoA groups are cleaved off, with only the reductase step using reducing equivalents, in the form of 2 NADPH that is spent to produce mevalonate. HMG-CoA Reductase is the rate-limiting step in the pathway, and also serves as the key regulatory enzyme to synthesize cholesterol.

Note: MG-CoA has an alternative metabolic fate. When blood glucose levels are low, Acetyl-CoA, produced from β-Oxidation of fatty acids, generates HMG-CoA, which can be converted to ketone bodies by the activity of HMG-CoA Lyase (HMGCL), β-hydroxybutyrate dehydrogenase, and Acetoacetate decarboxylase (AAD).

This linkage of start and repeat units occurs by “head-to-tail” nucleophilic substitution, and the subsequently formed geranyl-pyrophosphate serves as the primer for an analogous condensation yielding farnesyl-pyrophosphate.

Squalene is formed from the “head-to-head” condensation of two farnesyl-pyrophosphate molecules by Squalene synthase (SQS), in a reaction that requires NADPH as a cofactor. Eukaryotic cells and prokaryotes differ in their sterol synthesis at this juncture. Our cells require oxygen (and NADPH) to fuel the reaction (squalene monooxygenase) that forms squalene-2, 3-epoxide. Prokaryotes anaerobically produce a compound called hopanoids, which is similar to cholesterol.

Lanosterol synthase produces lanosterol, which is the first compound on the way to cholesterol that has four closed defined rings. From this point, a sequence of 19 reactions removes three methyl groups to form zymosterol. Zymosterol’s double bonds are rearranged;  eventually, one is removed, depending on the tissue in which the synthesis takes place.  The conversion of lanosterol to zymosterol takes place by enzymes that require eleven NADPH. Cholesterol’s synthesis from zymosterol requires an additional two NADPH to rearrange/remove double bonds.

An important conversion of cholesterol that takes place is esterification with long-chain fatty acids (e.g., palmitic acid) in the endoplasmic reticulum, which blocks cholesterol’s polar head group and, thus, its inclusion as a membrane fluidity buffer.

Cholesterol degradation leads to bile acids, which occur in the liver and excrete bile into the small intestine. Bile acid amides form conjugates with taurine or glycine, which dissociate completely at physiological pH levels due to their low pKa values. Therefore, bile serves as a good anionic detergent for the body and forms cylindrical micelles. It emulsifies lipids in the intestine so the intestinal mucosa can resorb them.

The transcription of HMG-CoA reductase is also under tight regulation so that the synthesis of cholesterol only takes place when the cell has adequate precursors to do so. When the cell needs to produce cholesterol, and there are plenty of precursors, sterol regulatory element-binding protein (SREBP) is released from the ER and translocates to the nucleus, where it binds the sterol regulatory element (SRE). This increases the rate of HMG-CoA reductase transcription.

Conversely, when there are high levels of cholesterol, or the cell needs to use precursors to produce other metabolites, SREBP is prevented from translocating to the nucleus and binding to SRE, attenuating the production of HMG-CoA reductase.

HMG-CoA reductase is regulated at additional levels: Glucocorticoids (metabolites of cholesterol) and other compounds accelerate HMGCR mRNA breakdown. Also, HMG-CoA reductase is regulated by sterol-accelerated ubiquitination and degradation. However, no total blockade of the enzyme occurs since sufficient intermediates must be supplied to synthesize non-sterols.  Similar regulation is exerted with HMG-CoA synthase and mevalonate kinase. 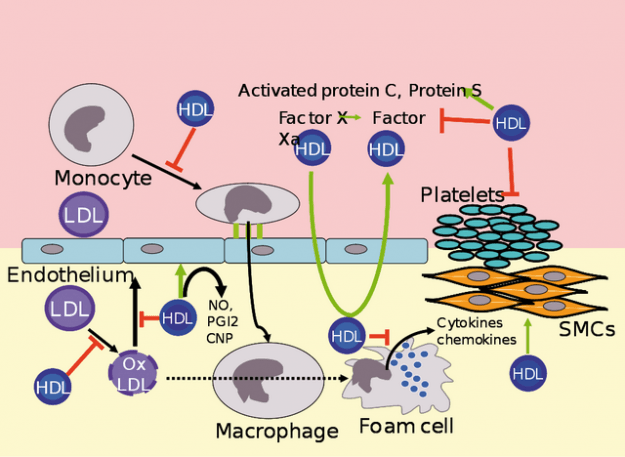 Lipoproteins are composed of endogenous or exogenous triacylglycerol or cholesteryl esters, forming a core surrounded by a shell composed of apolipoproteins, phospholipids, or free cholesterol. The polar portions of the lipids are oriented so that they are on the surface of the lipoprotein, and this makes them soluble. 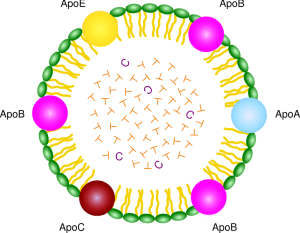 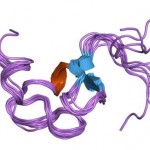 The apolipoprotein portion associated with lipoprotein particles has several diverse functions, such as providing recognition sites for cell-surface receptors and activating lipoprotein metabolism. They are divided by structure and function into five major classes, A through E. Most of the classes have subclasses, for example, apolipoprotein (or apo) A-I and apo C-II.