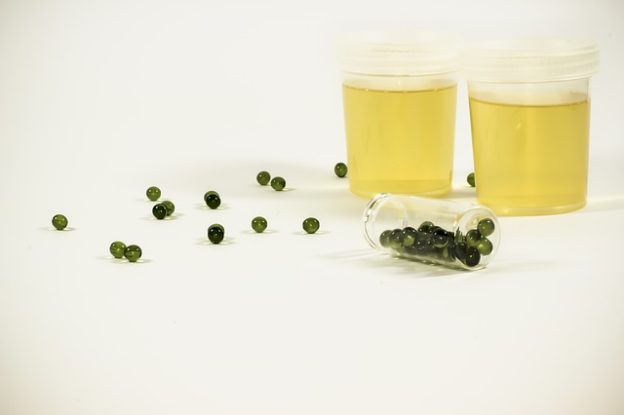 Proteinuria is defined as urinary protein excretion in children exceeding 100 mg/m2/day or > 4 mg/m2/hr.

Diabetic nephropathy is the most common cause of proteinuria representing up to 50 cases per million of the population.

In the U.S., there are 2-7 cases per 100000 children of the age below 16 years every year. The condition is more common among Americans of Asian or African origin due to the higher rates of diabetes among these groups.

In children, urinary protein excretion up to 100 mg/m2/day or 150 mg/day is considered normal, while in neonates it can be as high as up to 300 mg/m2/day. Normally, excreted urinary proteins include Tamm-Horsfall protein (uromodulin, ca 50 %), albumin (ca 40 %), and low-molecular-weight (LMW) proteins (ca 10 %) including β2-microglobulin and amino acids.

Normally, the passage of proteins across the glomerular basement membrane is controlled by :

The majority of LMW proteins that are filtered at glomerulus are reabsorbed by proximal tubule. Proteinuria occurs when any of these mechanisms are disrupted.

Overflow proteinuria occurs where proteins cannot be effectively reabsorbed by the proximal tubule due to an overproduction of proteins. Children with transient proteinuria do not have underlying renal parenchymal disease. One possible explanation for transient proteinuria are the hemodynamic changes in the glomerular blood flow causing an increased protein diffusion into the urine.

In renal diseases with persistent proteinuria, it is believed that proteinuria itself can cause injury to renal tubular cells, possibly by the generation of reactive oxygen species.

Some of the metabolic effects of hypoproteinemia include:

Proteinuria is mostly asymptomatic and may be detected during routine screening urinalysis or during diagnostic evaluation.

In transient proteinuria is present during a fever (temperature > 101 °F), dehydration, stress or heart failure, or following exercise, seizure or exposure to cold. Dipstick test shows 2+ or lower proteinuria, which resolves after a resolution of the condition. Sometimes, exercise-induced proteinuria may last for as long as 48 hours following exercise.

Nephrotic syndrome is characterized by nephrotic range proteinuria, hypoalbuminemia, hyperlipidemia, and edema. The child may present with periorbital or pedal edema, ascites, anasarca, or abdominal pain. Hematuria or hypertension may be present in some patients with or without a rise in cholesterol or lipids.

Edema is present in 95 % of the cases, which is insidious and intermittent in the early stage. Edema starts in low resistant regions like periorbital, scrotal and labial regions, then it gets generalized to legs, feet, and hands. The edema is pitting in nature which is noticed in the face at night and lower extremities in the day.

30 % of children have a history of allergy or hypersensitive reactions or history of respiratory tract infections, otitis media or other infections that lead to a relapse of idiopathic nephrotic syndrome in children.

Proteinuria is marked by increased protein excretion ( more than 1000 mg/day). The child’s urine contains high levels of albumin and albumin gets depleted in the blood. Both albuminuria and hypoalbuminemia are symptoms of nephrotic syndrome.

The patient may also depict diarrhea, loss of appetite and other cardinal symptoms of infection like fever, etc.

Patients with systemic renal diseases such as membranoproliferative glomerulonephritis(MPGN) usually have hematuria or hypertension in addition to proteinuria. Patients with post-infectious glomerulonephritis usually have a history of pharyngitis or impetigo 2–4 weeks prior and present with acute nephritic syndrome, hematuria, proteinuria, hypertension, and acute renal failure.

IgA nephropathy is characterized by episodes of macroscopic hematuria, proteinuria, abdominal or flank pain, and fever within 72 hours of a respiratory infection.

HSP is characterized by purpuric lesions, especially over buttocks and lower extremities, abdominal pain, edema, and arthralgia. HUS may present with a history of bloody diarrhea, vomiting, abdominal pain, anemia, and renal failure.

Diagnosis depends on the age of the child whether it is of congenital origin, or other reasons are behind. Collection of 24-hour urine is the gold standard for urinary protein quantization but is often impractical or not possible in children. 24-hour urine protein > 100-150 mg/m2/day usually suggests proteinuria, but preterm infants and neonates may normally have an even higher protein excretion. Urinary protein excretion > 1000–2000 mg/day is usually pathologic in children, except in cases of orthostatic proteinuria.

For measurement of UPr/UCr, freshly voided first-morning urine (FMU) specimen is usually preferred, but a random sample is also acceptable. As the ratio is dependent on urinary creatinine, the ratio may be elevated in conditions with low creatinine excretion such as severe malnutrition or children with low muscle mass. In conditions with low glomerular filtration rate (GFR) an interpretation of the ratio is difficult.

The urinary dipstick test is the most common test used initially. The reagent strip is analyzed within 60 seconds after immersing it in freshly voided urine. Tetrabromophore is a chromatophore that is impregnated on the strip and changes color depending upon the amount of proteins in the urine. The dipstick method is most sensitive to albumin and less sensitive to other proteins.

It is a semiquantitative method, which can be interpreted according to the following table.

Causes for false-negative results are very dilute urine (specific gravity < 1.005) or when the predominant protein in urine is not albumin.

Sulfosalicylic acid (SSA) turbidometric testing is a less commonly used qualitative test for proteinuria, but it can detect albumin, immunoglobulins, and Bence-Jones proteins in urine. As acidification of urine causes precipitation of urinary proteins, the turbidity results when SSA reagent (three parts) is added to freshly voided urine sample (one part). The degree of turbidity can be compared with a predetermined scale.

A microscopic examination of urine is helpful to diagnose other underlying medical conditions.

The initial evaluation of an asymptomatic child with persistent proteinuria should include an FMU sample for a complete urinalysis and UPr/UCr. Dipstick negative or trace proteinuria and UPr/UCr < 0.2 in the FMU sample for three consecutive days confirms the diagnosis of orthostatic proteinuria. For the collection of FMU, the child must empty the bladder before going to bed and the urine must be collected immediately upon rising in the morning.

For children with persistent proteinuria, further laboratory evaluation is required to diagnose other underlying conditions. Such evaluations include:

Indications for a referral to the pediatric nephrologist include

The initial treatment is started with corticosteroids (prednisolone) in case of idiopathic childhood nephrotic syndrome to control the overactivity of the immune system. Before starting corticosteroid therapy, infections and other contradictions should be checked. But there are incidences of relapse of the disease. Prednisone is given in small tapered doses to avoid relapses.

For children with isolated proteinuria, initial thorough diagnostic evaluation, periodic monitoring of FMU and blood pressure, and referral to a pediatric nephrologist are recommended. Proteinuria lowering medications may be considered.

Diuretic therapy is considered next to relieve edema. Loop diuretics like furosemide can be effective in improving edema and metolazone can be administered in combination with furosemide for the treatment of resistant edema.

Treatment of persistent proteinuria consists of the management of the underlying disease and the use of proteinuria lowering medications.

Angiotensin-converting enzyme (ACE) inhibitors or angiotensin receptor blockers (ARB) are proteinuria lowering agents. ACE inhibitors are helpful as primary or adjunctive treatment in patients with high grade or nephrotic-range proteinuria. They are often started in children with diabetes mellitus at the onset of microalbuminuria.

They have an additional advantage of lowering blood pressure in hypertensive patients. ARBs have similar effects, but they are more commonly used in older adolescents due to the lack of sufficient evidence in the pediatric population. They should be used cautiously, as it may result in further worsening of the kidney function. A combination of ACE inhibitor and ARB may have additional advantages.

Calcium channel blockers can also be helpful for the control of hypertension.

The long term prognosis of children with isolated proteinuria is good, however, ca 20 % of them have a risk of progressive renal disease within the next 10 years.

The mortality rate in pediatric nephrotic syndrome is reduced to half with the use of corticosteroids. The prognosis completely relies on the patient’s response to steroid therapy, whether steroid-responsive or steroid-resistant. There are remissions and relapses by puberty in most cases. However, they recover without damage to kidney function with medications.

Patients with steroid-resistant nephrotic syndrome show a good prognosis as relapses of proteinuria is controlled by other medications. There is a risk of developing end-stage kidney disease in case of failure of treatment.

Lunn A, Forbes TA. Haematuria and proteinuria in childhood. Paediatrics and Child Health 2016.