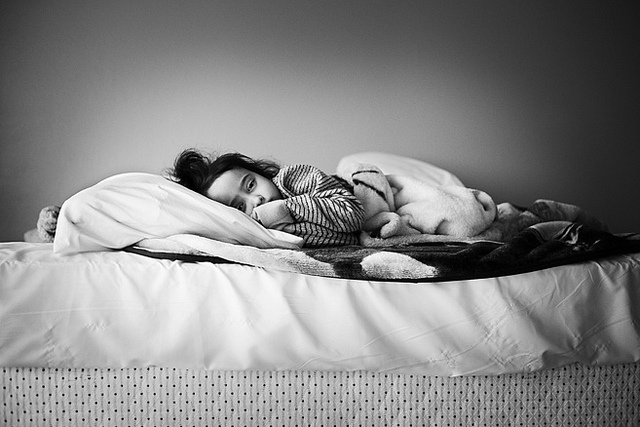 Sudden infant death syndrome (SIDS) is defined as an unexpected or inexplicable death of an infant while he or she is asleep, with no obvious cause. The prerequisite is that, despite autopsy, no other cause can be determined, meaning SIDS is a diagnosis of exclusion.

Brief resolved unexplained event (BRUE), previously referred to as apparent life-threatening event (ALTE), is defined as a sudden, brief (less than 1 minute), and now resolved episode in an infant that includes at least 1 of the following features:

In the United States, SIDS is the most common cause of death in infants after the 1st month of life.

The incidence of SIDS has declined dramatically in the United States due in large part to the Back to Sleep campaign, which encouraged non-prone sleeping. From 1988 to 2001, the SIDS rate decreased from 1.4 to 0.56 per 1,000 live births in the United States. The same decline in SIDS incidence has been observed in other nations that have encouraged non-prone sleeping.

SIDS incidence also varies significantly within different racial and ethnic groups in the United States. Incidence is highest in American Indians and non-Hispanic blacks, and the rate is lowest in Asians and Pacific Islanders. 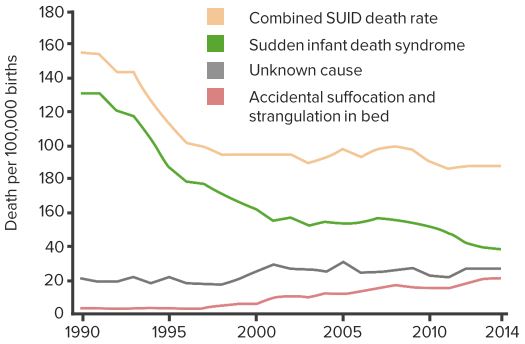 Multiple risk factors for SIDS have been identified. In most affected children, at least 1 of the following risk factors is present:

The most important preventive measure is the avoidance of risk factors, as many of the aforementioned risk factors are modifiable.

Multiple theories have been proposed to explain SIDS. The most probable 1 is multifactorial genesis in particularly vulnerable babies, in which internal and external factors work together.

Most cases involve initial hypoxia followed by progressive bradycardia and gasping for air. After several minutes, there are prolonged periods of apnea without adequate arousal reaction, causing the child to suffocate.

Typically, a baby who has died from SIDS was in good condition and well-fed. There are no external injuries or petechiae. Lips and nail beds are cyanotic. Because the baby is usually found in a prone position, livor mortis can be found on the front of the body. If the baby was lying face down, there is typically no livor mortis on the face. Moist bed sheets often hint toward sweating. Foamy, bubbly secretion can be found in the airways, vomit may be found in the mouth area.

In addition, the right side of the heart is often filled with blood, and there may be associated with pulmonary edema. In most cases, the deceased baby’s bladder is empty, and signs of acute infection usually can be found in the upper airways.

Because SIDS is a diagnosis of exclusion, all of the natural and unnatural causes of death must be considered in the differential diagnosis.

Child abuse may be defined in broader terms as any injury (physical, emotional, sexual, or intellectual) inflicted upon a child by a parent or caretaker.

About 0.7 million to 1.25 million children are abused or neglected annually in the United States. Approx. 18% of cases involve physical abuse. Child abuse is also closely related to domestic violence, and the 2 types of abuse overlap in 30%–60% of cases. Mothers of abused children are affected by violence in approx. half of the cases.

As children are often defenseless, there are many different methods of abuse, including beating with or without tools, kicking, pulling hair, throwing or tossing, shaking, choking, applying thermal sources (e.g., burning, scalding, submerging in cold water), locking away, forcing into darkness, tying up, forcing a child to stand for hours, forcing a child to take painful positions, forcing a child to eat feces or vomit, inducing hunger or thirst, as well as sexually abusing. 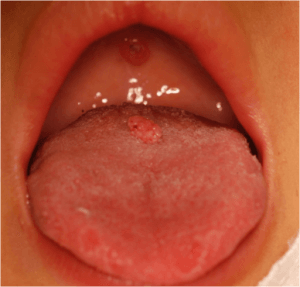 Image: Lesion located on the tongue with a pedicled base (5-year-old sexually abused boy). By Open-i, License: CC BY 2.0

General findings in cases of child abuse include a compromised general condition (also referred to as psychosocial short stature), a great number of frequently occurring injuries. Injuries may be in atypical locations or untreated. Frequently in such cases, discrepancies are found between clinical findings and statements made by the child or the guardian. In many cases, families change pediatricians and treating clinics and examination records is missing.

Note: Falls from a height of 100–150 cm (3–5 ft) (e.g., from the changing table) typically do not result in life-threatening injuries in babies and infants.

Typical locations of abrasions and hematomas:

Trauma caused by shaking, or shaken baby syndrome, is one of the most common causes of death in child abuse cases. In the United States, it is one of the more common causes of permanent mental disability. It is common in small children younger than 3 years of age. In cases of the shaken baby syndrome, a caregiver often violently shakes the baby in frustration, especially when the baby cries inconsolably.

Typically, shaken baby syndrome consists of the triad of subdural hematoma, retinal bleeding, and diffuse severe brain swelling. External injuries are typically absent. As far as differential diagnosis is concerned, other causes can be ruled out if there are simultaneous fractures of long, hollow bones and/or histological findings of diffuse axonal damage. 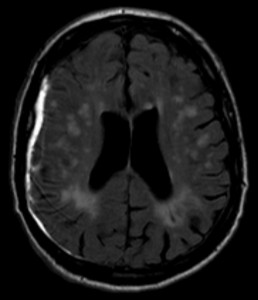 Other common findings are finger marks on the baby’s shoulders, arms, and the thorax. Symptoms seen at the clinic may include lethargy, vomiting, and cramps caused by increasing pressure in the brain. The diagnosis is made via babygram (an X-ray of the entire body of an infant), skull computed tomography, and ophthalmic examination.

Battered child syndrome is the term used when X-ray findings confirm that a child has been battered. Classical findings include periosteal reactions, such as collar formation on the long hollow bones; epiphyseal detachments; and simultaneous rib fractures (perhaps with callus formation). 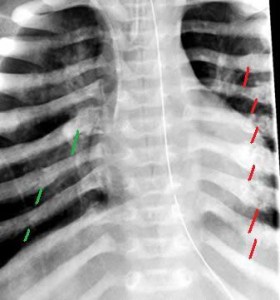 Image: Fractures of ribs in an infant. By National Institutes of Health, License: Public domain

The Diagnostic and Statistical Manual of Mental Disorders, 5th edition (DSM-V), uses the term ‘factitious disorder imposed on another’. The term includes fabricated or induced illness in an adult, child, or pet.

According to Rosenberg, 4 diagnostic criteria must be met to confirm the diagnosis:

Simulated symptoms are usually issues that are difficult to verify, such as epileptic seizures. Children sometimes are intentionally poisoned or almost suffocated and subsequently presented to the emergency room, so that the caregiver can be praised as the savior.

Affected individuals often have medical knowledge or even work in the medical field. Therefore, they do not draw attention to their implausible statements. Rather, they are discovered after frequently presenting a child or, in cases where the perpetrator is a nurse, children get sick frequently or even die during their shifts. The disorder is attention-seeking.

False statements in cases of child murder frequently include claims about falls, accidents, or alleged stillbirths. The first two can be identified via the aforementioned information concerning child abuse. However, differentiation between stillbirth and postnatal murder can be difficult, as only a little force is needed for the latter.

Signs that a newborn was alive:

Signs that a baby is newborn:

Report a missing or abused child. Assistance is available for free.
National Center for Missing and Exploited Children
CyberTipline
1-800-843-5678
24 hours every day
Learn. Apply. Retain.
Your path to achieve medical excellence.
Study for medical school and boards with Lecturio.
References