Image: “Intramolecular forces keep a molecule intact. Intermolecular forces hold multiple molecules together and determine many of a substance’s properties.” by OpenStaxCollege. License: CC BY 4.0

Ionic bonding is a type of chemical bond that is based on the force of attraction between oppositely-charged ions (Coulomb-force, electrostatic force). Due to the ionic bond, there occurs a regular arrangement of ions, which is also called ionic crystal. If a solid is built up by ions, then it is considered a salt. They are weaker and less stable but still abide by the octet rule. Common table salt (NaCl) is formed by ionic bonds. 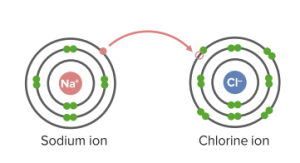 The following are the common characteristics of an ionic crystal:

An atomic bond is a type of chemical bond that is based on the formation of a common electron pair. The atoms have solid partners, referring to a directed binding. Single covalent bonds involve the sharing of one pair of electrons. Hydrogen has a valence of 1 & 1 valence electron; 2 electrons in the valence shell will satisfy the octet rule. Each has 2 electrons in the valence shell.

Double covalent bonds involve the sharing of two pairs of electrons (stronger). Oxygen has 6 valence electrons. It needs 2 more electrons to satisfy the octet rule. It shares 2 electrons with another oxygen. They have 2 pairs of shared electrons in this bond. The substance class of molecular substances can be derived from this type of binding.

The metallic bond is a type of chemical bond that is based on the forces of attraction between positively charged metal ions and negatively charged, versatile ions. The substance class can be derived from this binding type.

Characteristics: regular, a grid-like arrangement of the positively charged metal ions in a space

Calculation: Not calculable, as it occurs in metals and alloys. 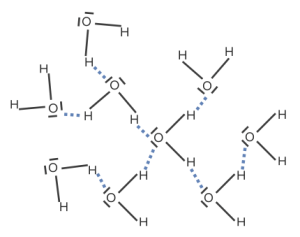 The Van-der-Waals forces represent weak forces of attraction or non-covalent interactions between molecules, atoms or ions. It is dependent on the particular size and the contact surface.

If two molecules interact via a hydrogen atom, then so-called hydrogen bridges occur. Strong forces of attraction are formed between the positively charged hydrogen atom, and a free electron pair of a nitrogen, oxygen, or fluorine atom. Hydrogen bridges are only formed with the most electronegative elements (N, O, and F). At this, there is a donator and an acceptor.

The relevance of the hydrogen bridges in the biochemistry:

Image: “Sigma (σ) bonds form from the overlap of the following: (a) two s orbitals, (b) an s orbital and a p orbital, and (c) two p orbitals. The dots indicate the locations of the nuclei.” by PhilSchatz. License: CC BY 4.0

Sigma bonds are types of bonds in a molecular structure that are formed by end-to-end overlap of atomic orbitals. Unless this type of overlap is possible, a sigma bond may not form. One simple sigma bond is the one present in an H2 molecule. Since an H atom only has an s-orbital, the overlap will be between two s-orbitals.

Overlap between two p-orbitals is also possible. To form a sigma bond, the interaction should be a head-to-tail interaction, which is one lobe of one p-orbital faces one lobe of the other p-orbital, enabling the overlap as in the figure below.

Sigma bonds may also be formed by the interaction of dissimilar orbitals. In the case of the bond between Hydrogen and Fluorine in hydrogen fluoride, the H atom only has an s-orbital available for bonding, while the F atom has a p-orbital. Even though the two orbitals are different, a sigma bond may still be formed as long as the two interacting orbitals are in the correct orientation. In this way, sharing of electrons will be achieved between the two atoms.

For example, if the s and p-orbital interacting with each other are in an orientation where one of the lobes of the p-orbital is directly facing the s-orbital, a sigma bond may form because overlap of orbitals is possible. If the s-orbital of the H atom is not directly facing any of the two lobes of the p-orbital, no sigma bond will be formed because orbital overlap will not occur.

For heteroatomic molecules, the overlap of simple s and p-orbitals will result in a highly restricted molecular structure. For example, the compound methane does not follow an ordinary square planar structure; instead, it follows a tetrahedral configuration. Also, since the p-orbitals are oriented in different planes, this would involve different energy values. To aid this, hybridization should occur. Orbital hybridization is the mixing of atomic orbitals into new hybrid orbitals, with different shapes and energies to the component atomic orbital, suitable for electron pairing during the formation of covalent bonds. 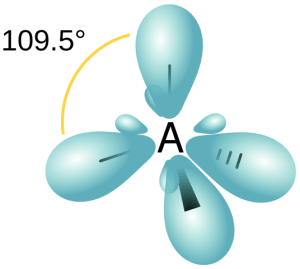 In a methane molecule, it is not possible to form four sigma bonds due to 1 s-s and 3 s-p interaction. This is because they will have different amounts of energy involved. What happens then is the one s and the 3 p-orbitals of the C atom will be hybridized to form 4 sp3 hybrid orbitals that are all similar in energies and shapes. Each of these sp3-orbitals will overlap with the s-orbital of an H atom forming four sigma bonds, resulting in a tetrahedral configuration.

Image: “Pi (π) bonds form from the side-by-side overlap of two p-orbitals. The dots indicate the location of the nuclei.” by PhilSchatz. License: CC BY 4.0

Between two atoms, only one single bond is possible to be formed. This is because there is only one way for end-to-end interaction to occur, especially since the p orbitals are oriented in different planes. Another type of orbital overlap is possible. If two p-orbitals are oriented parallel to each other, a side-by-side overlap is possible. This type of interaction leads to the formation of pi bonds.

Pi bonds are weaker than sigma bonds because of the weaker overlap between the orbitals. Electrons in pi bonds can also be referred to as pi electrons. Pi bonds are present in multiple bonds (double or triple bonds). Pi interaction is only possible between atoms that are already sigma bonded.