The development of the embryonic cardiovascular system begins during the third week of gestation. The process begins with a straight tube which will eventually differentiate to form a functional heart after several events. Disturbances of any events in the development of the heart, such as cardiac looping, can result in severe congenital disorders. The major clinical presentation of these abnormalities will be cyanosis. 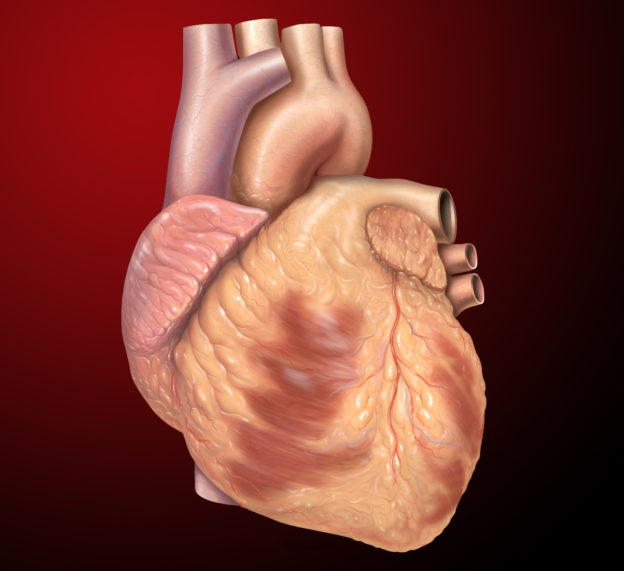 Derivatives of the Cardiac Tube 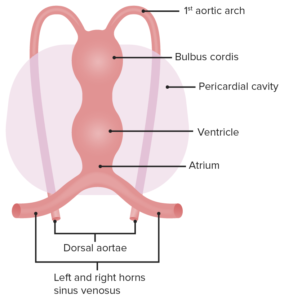 Image: “Early development of the heart” The early heart is divided into five regions, each of which gives rise to different structures. By Lecturio.

Early Development of the Heart by Peter Ward, PhD

Atrial septum: begins with endocardial cushions at the base of the atrial chamber and septum primum 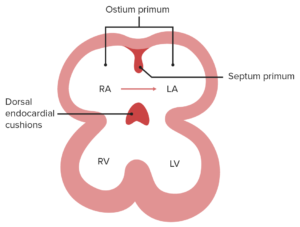 Image: “Foramen primum” The opening between the two embryonic atria. By Lecturio. 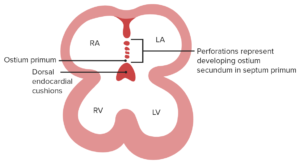 Image: “Foramen secundum” Endocardial cushions are derived from the neural crest. As septum primum approaches the dorsal endocardial cushions, cells in the septum undergo apoptosis, which create the foramen (ostium) secundum. By Lecturio. 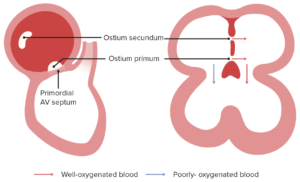 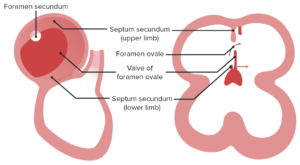 Image: “Foramen ovale” Secundum will grow to narrow foramen (ostium) secundum and form foramen ovale. In this case, septum primum will function as a valve. By Lecturio. 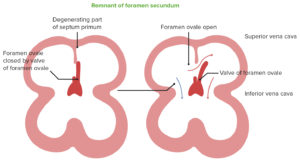 Image: “Remnant of foramen secundum” Blood from IVC pushes septum primum (valve of foramen ovale) to move blood from the right atrium to the left atrium (LA), after which the blood will flow to the left ventricle. At birth, the pressure in LA will increase, which will shut foramen ovale. By Lecturio. 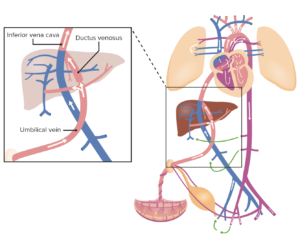 Image: “Fetal circulation” Oxygenated blood from the umbilical vein drains into IVC which also collects the blood from the organs and lower portion of our body. Therefore the blood becomes slightly deoxygenated. By Lecturio. 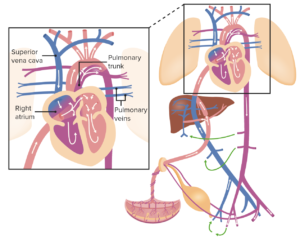 Image: “Fetal circulation Heart opened foramen ovale” Blood from IVC pushes the valve of foramen ovale and flows into the left side of the heart, where it mixes in LA with deoxygenated blood from the pulmonary veins. It leaves the heart through the aorta and flows to the iliac arteries which are connected to the placenta by the umbilical arteries. On the other hand, blood from SVC flows directly into RV and then to the pulmonary trunk, which is connected to the descending aorta through the ductus arteriosus. By Lecturio. 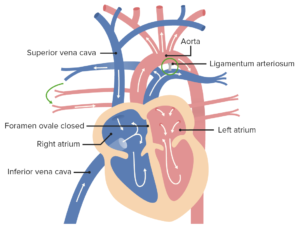 Image: “Fetal circulation Heart Ligamentum arteriosum” After birth, the ductus arteriosus becomes ligamentum arteriosum, as blood is able to enter the lungs to be oxygenated. Foramen ovale closes and becomes fossa ovalis due to increased pressure in LA. By Lecturio. 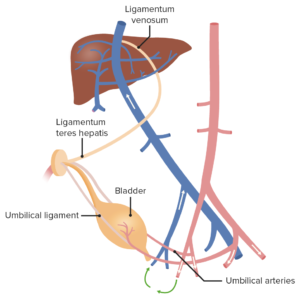