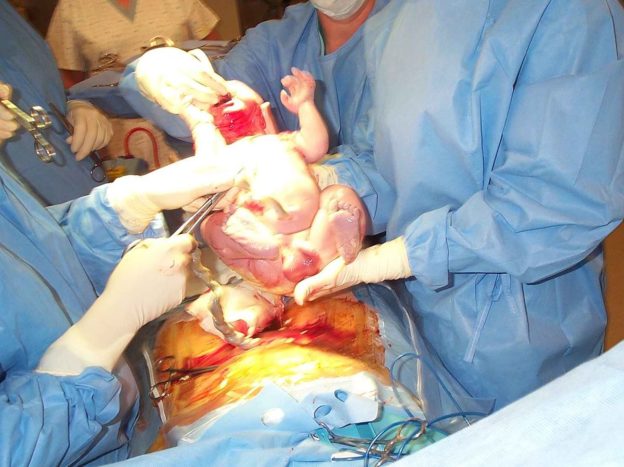 Image: “A father’s view of birth by caesarian section. w:User:Erich_gasboy’s son as the cord was clamped. Double licensing as explained on the talk page Source: http://en.wikipedia.org” by Erich Schulz. License: CC BY-SA 3.0

The advantages of the Pfannenstiel or transverse incisions are that there is less risk of wound dehiscence and a better cosmetic outcome for the mother. This is the preferred technique unless there is extreme urgency involved in cesarean delivery.

Most women have a planned cesarean delivery at term because of previous uterine surgery, twin gestation, placenta previa, or abnormal presentation of the fetus. They have no symptoms and are not in labor at the time of their cesarean section.

Most women who undergo a cesarean section are not in labor and have normal vital signs. The fetus is not in distress and is full term. Recommendations are to plan a cesarean section to be at approximately 38 weeks’ gestational age so that the fetus is at term and there is a decreased chance of the woman spontaneously going into labor prior to her planned cesarean section.

The standard cesarean section is begun with a Pfannenstiel incision, which is a low transverse incision just above the pubic bone in the gravid woman. The skin and fat are dissected and the bladder is identified and kept out of the surgical field. The rectus abdominis muscles are transected vertically to expose the lower uterine segment. The peritoneum is opened transversely and a transverse cut is made into the lower uterine segment. This cut is widened manually to fit the head and body of the infant. The infant is delivered through the incision.

After the infant is delivered, the uterine contents are evacuated and a two-layer repair is done in the lower uterine segment. The rectus abdominis muscles may or may not be approximated. The fatty tissue is approximated and staples or subcutaneous sutures are used to close the skin. Blood loss is usually minimal and there is rarely a need for blood products.

The complication rate for cesarean sections is about 10 %. Serious complications include blood loss of greater than 1,500 cc, need for transfusion of blood, emergency hysterectomy, a necessity for another surgery, blot clotting problems, pulmonary edema, septicemia, and pneumonia.