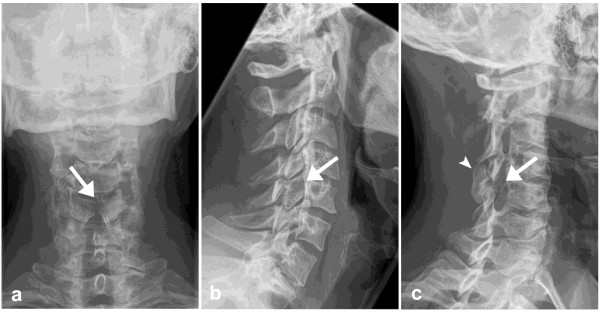 The most common cause of cervical spine injury in the young is trauma due to automobile accidents. Road traffic accidents are also involved in the mechanism of injury in the elderly; however, falling becomes more common in this age group.

Up to 5-10% of unconscious patients presenting to emergency departments in the United States have a cervical spine fracture. Of these, 50% involve the C6/C7 vertebrae, while 30% involve the C2 vertebra.

Anatomy of the Cervical Spine 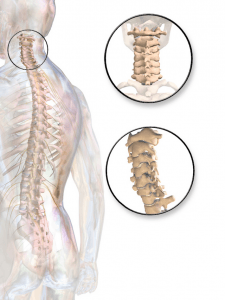 The cervical spine is made up of 7 cervical vertebrae with intervertebral disks between them and strengthened by various ligaments.

Cervical spinal nerves emerge above the corresponding vertebra with an additional C8 spinal nerve emerging below C7; thus, there are eight cervical nerve roots despite there being 7 cervical spines.

For the study of fractures, vertebrae can be divided into three columns that determine the stability of a fracture in these regions:

These are fractures that involve the craniocervical junction; the upper part of the cervical spine that has a limited range of extension due to the transverse portion of the alar ligaments. When there is flexion of the head combined with head rotation, the alar ligaments become lax and dilated; therefore, cervical spine injuries are more common when the head is in that position.

These fractures are of significance because of three unique characteristics:

Fractures of the occipital condyle often happen in patients involved in high-energy trauma due to automobile accidents or sports-related injuries. The patient is typically young.

There are no specific signs of occipital condyle fractures and patients generally complain of pain on the posterior aspect of the neck which is associated with paravertebral muscle spasm.

Classification of occipital condyle fractures as postulated by Anderson and Montesano:

Conservative treatment of occipital condyle fractures is often associated with a good outcome and the patient is very likely to become free of neck pain and regain full range of motion of his or her neck. A Philadelphia cervical collar might be needed in mild and moderate cases of occipital condyle fractures. Rigid immobilization of the cervical spine is needed for type III fractures. Patients who have instability after a period of immobilization should undergo occiput-C2 arthrodesis.

Fractures of the C1 vertebra, i.e. atlas fractures, represent 2% of all vertebral spine fractures. These fractures are more commonly seen when there is axial compression of the skull on the atlas which results in rupture fracture of the anterior and posterior arches of the vertebra. This type of fracture is known as a Jefferson fracture.

The stability of the spine is dependent on the status of the transverse ligaments. This forms the basis of classification by Dickman as follows: 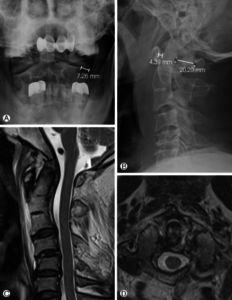 When there is a separation between the two arches of more than 7 mm, the possibility of transverse ligament injury becomes quite high. Treatment of Jefferson fractures includes a reduction by cranial traction and immobilization of the cervical spine for three to four months. Immediate occiput-cervical arthrodesis is indicated in cases that are complicated by transverse ligament rupture. Dislocations of the atlas-axis joint or pure C1-C2 dislocations are rare and often fatal.

These fractures might be seen on plain radiographs; however, their visualization is better on computerized tomography studies of the cervical spine, especially if there is no deviation of the odontoid dens.

Types of odontoid dens fractures can be summarized in the following:

Type I fractures are treated with cervical arthrodesis for three months. Type II fractures should be treated surgically if:

The treatment of Type III is similar to Type II.

The subaxial injury classification (SLIC scale) can be used to classify the type of injury of the lower cervical spine below the axis. This classification system takes into account the following three characteristics:

Based on these three features, a score is calculated that can classify patients with lower cervical spine injuries into the following groups:

The following table can be used to determine the SLIC score of a patient with a lower cervical spine injury:

Early spine stabilization should be attempted as early as possible for optimum recovery when there is evidence of a spinal cord injury. In addition to the stabilization of the spine, one should also aim to decompress the spine from any compression. Computed tomography studies of the cervical spine are beneficial in the evaluation and exclusion of fractures; whereas, magnetic resonance imaging might be needed to evaluate the spinal cord.