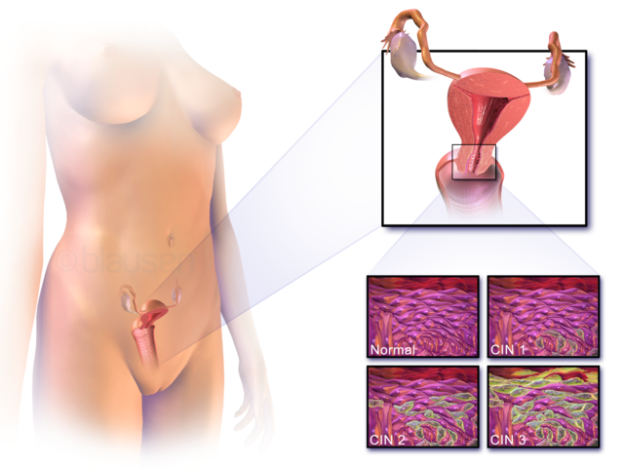 Because pre-malignant and early stages of cervical cancer are usually asymptomatic, they usually represent a random finding. In 90% of the cases, however, advanced cancers show symptoms, such as contact bleeding, lymphedema of the legs, ureteral stenosis, ileus symptoms, or back pain.

The recommended age at first screening suggested by the World Health Organization (WHO) is 30 years. However, the age at first screening varies between countries. It is 20 years in Germany, and 21 years in the USA. Screening includes direct visualization of the cervix by adjusting the speculum and using acetic acid or Lugol’s iodine to highlight precancerous lesions, assess epithelial atypia on the vaginal portion of the cervix or ectocervix(portio vaginalis cervicis), and cytologic evaluation of the cervical smear.

In this case, smears are obtained from the endocervix and the ectocervix for microscopic evaluation via Papanicolaou staining (‘Pap smear’).

In addition, a colposcopy can be used to view the ectocervix under a 6- to 40-fold magnification. For an extended investigation, the ectocervix is dabbed with acetic acid or Lugol’s iodine. In the case of the latter, the normal epithelium turns brown, while the atypical, altered epithelium remains bright. 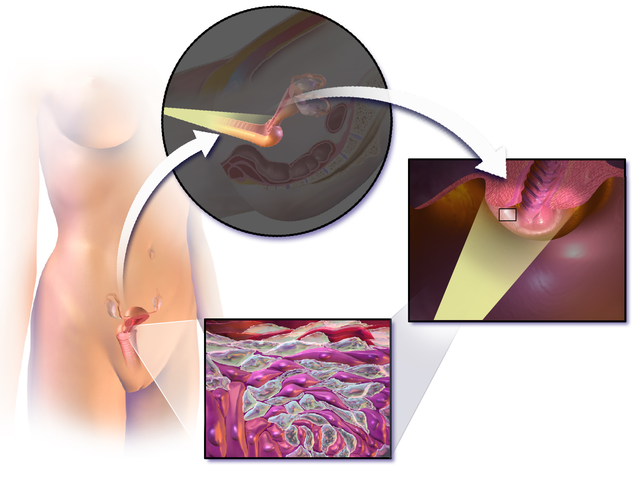 The various diagnostic steps in the gynecological examination are found here: Diagnostics of female genitalia.

HPV infection can be detected using a PCR. Because papillomaviruses are found in 98% of invasive carcinomas, a negative test result almost excludes oncologic risk. However, a positive finding only indicates potential disease risk. Thus, HPV diagnostics are indicated for supplementary examination in suspicious findings, but not as a screening method. 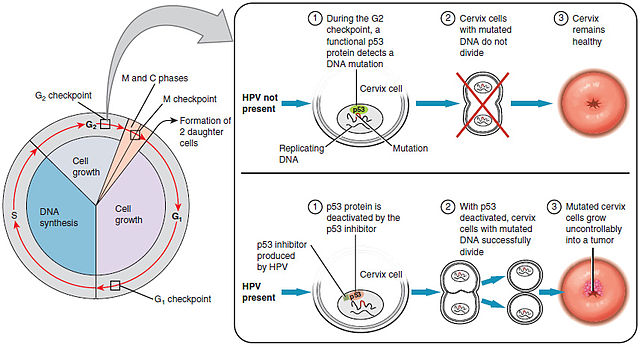 Image: In most cases, cells infected with the HPV virus heal on their own. In some cases, however, the virus continues to spread and becomes invasive cancer. By OpenStax College, License: CC BY 3.0

Any significant findings associated with suspicious cases must be confirmed histologically via selective biopsy under colposcopy or cervical curettage.

Conization is a more invasive method entailing the removal of pathological tissue containing both the endocervix and the ectocervix, using a scalpel (knife conization) or electric loop (loop conization, LEEP). Because of the typical tumor localization (sexually mature women: ectocervix; older women: cervical canal), the cones are flat in premenopausal women and high and narrow in postmenopausal cases. However, this method is associated with the risk of bleeding and late complications, such as cervical stenosis and insufficiency.

In addition to direct visualization of the cervix via a speculum and palpation, the evaluation of tumor spread is also mandatory in histologically-confirmed cancer. Therefore, transvaginal and renal ultrasound is performed. 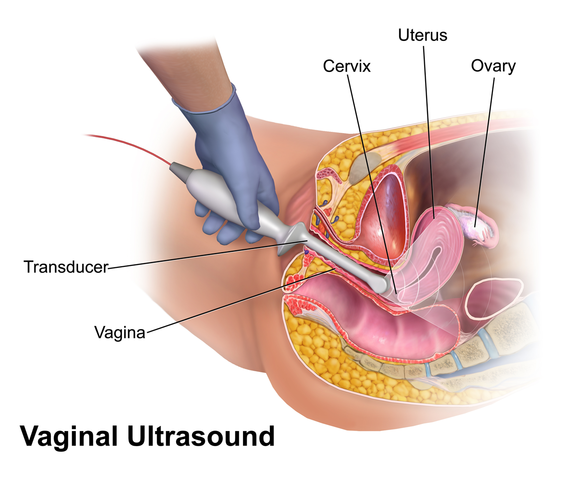 Cervical cancer is staged by the International Federation of Gynecology and Obstetrics (FIGO) staging system, which is based on a clinical examination, rather than surgical findings. The diagnosis is based on staging using the following tests: palpation (feeling with the fingers); inspection; colposcopy; endocervical curettage; hysteroscopy; cystoscopy; proctoscopy; intravenous urography; X-ray examination of the lungs and skeleton; and cervical conization.

Patients with histologically confirmed cervical cancer FIGO stage from 1B2 up to and including III should receive a baseline MRI for the assessment of locoregional tumor spread.

If necessary, rectoscopy and cystoscopy can be performed. In FIGO IB2, a CT of the thorax and abdomen can be used to assess extrapelvic tumor spread.

Therapy of cervical cancer is tailored to individual cases and entails complex individual treatment planning. In addition to the stage classification, factors such as family planning, patient age, and risk factors are considered.

Note: The therapy of cervical cancer must be adapted to each patient individually!

The spontaneous recovery rate of CIN I and II is high, and therefore, follow-up cytology is needed after 3 months.

Changes persisting beyond 12 months or the presence of CIN III warrant operative therapy.

Conization is the most frequently performed treatment. The cut margins are assessed histologically, and in the absence of atypia, the probability of CIN recurrence is 1–2% however, cut margins with atypia increase the risk of CIN by 15–20%.

Laser surgery is another option, in which the pathologic tissue is destroyed by a laser beam at a depth of 5–7 mm. This method is only slightly invasive, but a histologic assessment is not possible.

A hysterectomy is considered in cases of postmenopausal women, and women who have undesired fertility or are diagnosed with other diseases of the uterus.

Cancer with early stromal invasion can be cured by hysterectomy (see below). In the case of a microcarcinoma (FIGO 1A2), the removal of the pelvic lymph nodes is another option; however, women contemplating pregnancy and childbirth may undergo conization alone.

Operative therapy is the therapy of choice in FIGO stages IB-IIB. Radical hysterectomy (abdominal radical surgery) is the standard.

Depending on the tumor findings, different grades of radical surgery are indicated. According to Piver et al., the following procedures are performed:

In the case of squamous cell carcinoma, the removal of adnexa is not necessary for premenopausal women. In the case of adenocarcinoma, however, it should be considered because of the higher risk of metastasis.

Note: Removal of the adnexa is not obligatory! 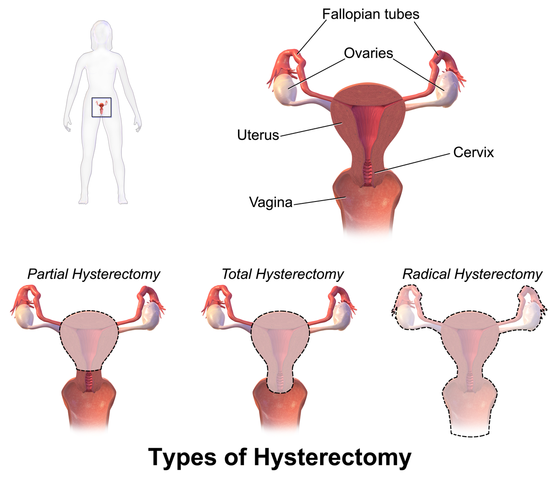 In the case of small tumors (< 2 cm), negative lymph nodes and squamous cell carcinoma, trachelectomy(cervicectomy) are indicated to preserve fertility. The uterus and a part of the cervix are left behind and attached to the vagina. Removal of the lymph nodes is performed laparoscopically.

When the tumor extends beyond the cervix limits (FIGO stage III) are exceeded, a primary surgical procedure is not feasible. Instead, primary radiation therapy with a combination of platinum-based chemotherapy (cisplatin) is the method of choice starting with stage IIB.

Optimal radiotherapy results are achieved via a combination of teletherapy (percutaneous irradiation) and brachytherapy (contact therapy). 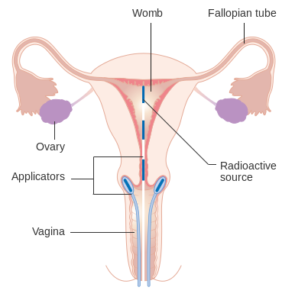 In brachytherapy, a radionuclide carrier is introduced into the cavum uteri using the afterloading method, which spares surrounding structures, such as the urinary bladder and rectum.

In cases that are inoperable, or if preservation of ovarian function is not the goal, primary radiotherapy is also indicated for smaller carcinomas because this is equivalent to the operation.

Postoperative irradiation is indicated when the carcinoma cannot be completely obliterated by surgery.

In contrast to other genital carcinomas (e.g., ovarian carcinoma), cervical carcinoma is less responsive to chemotherapy. In stage IVB, palliative systemic therapy is the means of choice.

Neoadjuvant chemotherapy can be used to reduce the tumor size (down-staging) prior to surgery or irradiation.

Aftercare and Prognosis of Cervical Cancer

For aftercare, the current guidelines recommend:

Screening cessation for women undergoing total hysterectomy (removal of the uterus and cervix); continued screening of women who were treated with supracervical hysterectomy (cervix intact).

Control of tumor markers (SCC, CEA) is not recommended due to a lack of evidence.

The prognosis of cervical cancer depends on various factors, including tumor stage, lymph node involvement, resection margins, and tumor size. The mean 5-year survival rates of the different stages are:

If vascular invasion occurs, the 5-year survival rate drops from 80%–30%, and in the case of lymph node metastasis from 85%–50%. Young age is also a negative prognostic factor.

Primary prevention of cervical carcinoma involves the prevention of risk factors (promiscuity, smoking, and infections) and possible vaccination against HPV viruses as early as possible and before the start of sexual activity. It is indicated for girls and boys alike.

The currently available vaccines include: