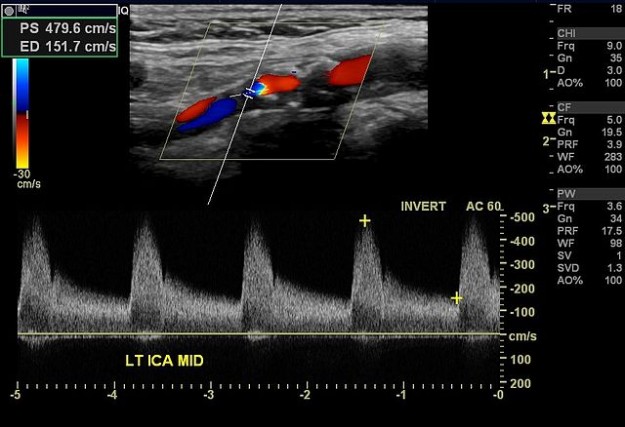 The diagnostic approach recommended in clinical practice is discussed here.

Clinical and neurological assessment of patients with suspected cerebral infarction

Initially, a structured clinical neurological examination is required to determine any focal neurological deficits and to identify the precise location of the area of infarction. The initial stroke severity is assessed in the emergency department and regularly thereafter using the national institutes of health stroke scale (NIHSS).

Regular check-ups are needed for dynamic assessment of the pathophysiology of acute cerebral infarction and other potential complications, and also indicate the efficacy of intravenous thrombolytic therapy (see below).

Note: In many cases, a review of the patient’s medical history and a clinical neurological examination are sufficient to suggest a circulatory disorder. However, cerebral infarction cannot be distinguished from an intracerebral hemorrhage on the basis of symptoms and signs alone!

Based on a clinical neurological assessment of the patient, further emergency laboratory testing should routinely be performed. It is critical to select patients eligible for thrombolytic therapy based on coagulation parameters before initiating the treatment.

Clinical neurological examination and blood tests followed by a CT scan of the head can exclude cerebral hemorrhage and any contraindications to thrombolytic treatment. Frequently, in addition to unenhanced CT brain scans, CT angiography (CTA) and CT perfusion imaging (CTP) are performed.

During the inpatient stay, CT scans of the brain are used to monitor and to assess possible hemorrhage or development of space-occupying lesions.

CT scans of the brain may be used to reveal:

Early ischemic clinical signs are visible in the 1st 2–4 hours after the onset of the ischemic event and may disappear after 12–24 hours. Early histopathological signs of stroke are sulcal effacement with loss of grey-white matter differentiation. The visible hyperdense cerebral artery is the earliest ischemic sign and is referred to as a hyperdense posterior cerebral artery sign, which is apparent long before parenchymal changes.

Furthermore, the delineation of basal ganglia can be interpreted as an early sign of middle cerebral artery infarction.

Note: Early signs of cerebral infarction do not manifest directly after the onset of an ischemic event! Patients presenting in the emergency department immediately after an ischemic event may have a perfectly normal CT scan!

After the 1st 12–24 hours the infarcted tissue is sharply demarcated, for e.g., within a vascular territory. The affected area appears isodense or hypodense. Morphological findings weeks after an ischemic infarction include an area of definite hypodensity or cystic cavity, which is often associated with signs of focal atrophy.

Large infarction or a stroke that erodes adjacent blood vessels may trigger swelling of the brain tissue (cerebral edema), which in turn results in elevated pressure inside the skull. It may cause a midline shift to the opposite side and ventricular compression. Raised intracranial pressure represents a severe neurological complication warranting urgent intervention! 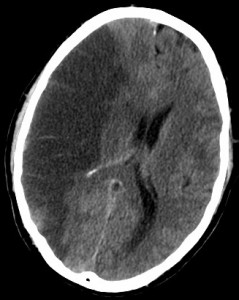 Image: CT-scan of the brain with a RIGHT MCA infarct. By Lucien Monfils, License: CC BY-SA 3.0

All patients with suspected cerebral infarction require an MRI in addition to the initial CAT scan. MRI is useful specifically to identify the microangiopathic lesions or arterial dissections with subintimal hematoma.

Furthermore, MRI facilitates enhanced visualization of the brainstem compared with CT, in which the surrounding osseous structures interfere with and limit scan resolution. MR angiography does not require the use of an intravenous contrast agent.

MRI plays an important role in the screening of patients amenable to thrombolytic interventions, once the critical ‘window of opportunity’ has already passed.

The pathophysiology involves an infarct core formed by irreversibly damaged cells. The so-called stunned cells with preserved integrity and metabolism are limited in their function but can be saved in principle. They constitute the area known as the ischemic penumbra (= tissue at risk) and is an indication for thrombolytic therapy. Using MRI, the infarct core can be differentiated from the penumbra based on the concept of resonance perfusion-diffusion mismatch (PWI/DWI-mismatch). 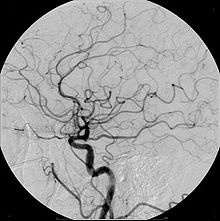 Transcranial doppler ultrasound (TCD) is another important diagnostic tool used in acute stroke diagnosis. TCD can be used to determine cerebral blood flow velocity, which can be used clinically to evaluate stenosis, emboli or potential vascular inflammation. TCD is also a useful tool in pre-surgical planning of ICA stenosis or to monitor the efficacy of intravenous thrombolytic treatment.

Comprehensive etiological evaluation is performed as part of inpatient primary care in addition to the assessment of actual infarction. Doppler ultrasonography is 1 option. In addition, all patients undergo ECGs and long-term ECGs, as well as (long-term) blood pressure measurements.

Also, echocardiograms are performed in all patients. Laboratory tests in addition to medical history facilitate the assessment of the individual cardiovascular risk. In particular, parameters of lipid metabolism and blood glucose should be obtained.

If these initial medical investigations do not provide a coherent picture of clinical manifestation and etiology, a broader diagnostic approach is required to exclude or establish less common causes of cerebral infarction.

Range of other neurological disorders elicits stroke-like symptoms. In any case, the exclusion of intracerebral hemorrhage has the highest priority. Conditions associated with stroke-like symptoms include migraine with aura and scotomas, aphasia or even hemiplegia.

Also, epilepsy with auras or Todd’s paresis may mimic typical ischemic symptoms. Other conditions in the differential diagnosis of ischemic stroke include cerebral abscesses or primary CNS tumors.

Each ischemic stroke requires rapid and priority emergency treatment in a dedicated ‘stroke-ready facility’, an emergency department equipped with personnel and equipment to provide comprehensive acute stroke treatment and regular monitoring of patients.

The prognosis of patients with acute cerebral infarction is largely determined by comorbidities and vital signs. Emergency management is therefore essential to optimize the stroke outcome.

Optimal management of acute stroke patients should include:

As brain tissue is under perfused, adequate oxygenated arterial blood must be supplied. In the case of major neurological deficits, the administration of 2–4 L of oxygen/min may be considered. In brainstem infarctions associated with pathological breathing patterns or high risk of aspiration, endotracheal intubation must be considered.

Persistent hypertension above the recommended levels should be lowered carefully to reduce the risk of cerebral ischemia. In these cases, administration of clonidine 0.15 mg s.c. or urapidil 5–25 mg i.v. is recommended. Hypotonic values must be avoided and, if necessary, matched with volume replacement or dopamine.

The risk of post-thrombotic complications is the lowest when the systolic blood pressure is maintained below 180 mm Hg. Post-thrombotic intracranial hemorrhage is the most serious complication in acute stroke management, as it is associated with the most significant morbidity and mortality.

Elevated blood pressure must, therefore, be avoided at all costs. However, existing blood pressure therapies should not be discontinued abruptly, instead, they should be carefully adjusted.

Diabetics are often affected because of their significant cardiovascular risk profile. Diabetic metabolism may deteriorate massively in the context of a stroke. Hyperglycemia and hypoglycemia adversely affect stroke outcomes suggesting the need for adjustment of blood sugar levels in the recommended target range of 80–180 mg/dl.

Elevated body temperature increases the area of infarction. The recommendation is to lower the temperature from 37.5°C (99.5°F) with antipyretic drugs (e.g., paracetamol).

Intravenous thrombolytic therapy entails the use of recombinant tissue-type plasminogen activator (rt-PA) to facilitate clot lysis and restoration of blood flow. Thrombolysis has systemic effects by shifting the equilibrium between clotting and bleeding (homeostasis) towards anticoagulation, affecting all the organs in the body.

Note: Antiplatelet drugs, a history of TIA or oral anticoagulation with an INR < 1.5 are not contraindications for systemic thrombolytic treatment.

The potential for interventional recanalization

Intra-arterial thrombolysis via angiographic intervention is an alternative to systemic therapy. It is mainly used for the treatment of middle cerebral or basilar artery occlusions and can significantly improve the otherwise unfavorable prognosis.

Thrombectomy is a treatment option in addition to local intra-arterial thrombolysis and angiography. In principle, a stent can be used to provide structural support. After successful stenting, as in coronary heart disease, patients initially undergo dual therapy followed by a simple antiplatelet therapy.

The efficacy of interventional thrombectomy has been disputed for a long time and has yet to be validated scientifically. However, recent studies demonstrated the benefit of these interventions in specific groups of patients.

Secondary bacterial infections must be successfully treated. Parenteral anticoagulation should be initiated depending on the thrombotic risk. Urgent pharmacological therapy is indicated in patients with post-stroke seizures or even epilepsy.

The majority of diagnostic procedures are aimed at long-term secondary prevention to prevent recurrent ischemic stroke. In addition to optimizing cardiovascular risk factors, the causative underlying diseases must be identified and treated. Pharmacological and surgical treatment strategies depend on the hospital and the disease.

A CHA2DS2 VASc score of ≤ 2 may be accompanied by inhibition of platelet aggregation or suggest the need for watchful waiting. In patients with atrial fibrillation at moderate-to-high risk of thromboembolic events (CHA2DS2 VASc risk score ≥ 2), oral anticoagulation (an INR target between 2.0 and 3.0) significantly reduces the risk of ischemic stroke.

Table 1: CHA2DS2-VASc score for the estimation of stroke risk in patients with non-rheumatic atrial fibrillation

Successful and appropriate treatment of endocarditis consists of targeted antibiotic therapy and eradication of infected areas, such as CVC and heart valves. Even if thrombosis develops on a damaged heart valve, anticoagulation is not an option because of frequent hemorrhage of existing infarcts and the danger of thrombus detachment, i.e., the dreaded embolism.

The treatment of dissections of brain-supplying arteries is an exception. Despite the arterial territory involved, standard anticoagulation or alternative treatment with antiplatelet drugs is recommended. Recanalization is uncommon in vessels with occlusion.

ICA stenosis, similar to almost all atherosclerotic vascular changes, has been associated with a specific cardiovascular risk factor profile. Accordingly, aggressive management and optimization of cardiovascular disease risk factors are an essential part of treatment.

Affected patients should reduce their weight and control arterial hypertension adequately. In addition, smoking cessation and cholesterol-lowering measures should be adopted. For primary prevention, platelet aggregation inhibitors (e.g., aspirin 100 mg 1-0-0) are used to reduce the annual risk of cerebral ischemic stroke significantly and are therefore recommended for all patients.

It is debatable whether ICA stenosis should be treated surgically or via interventional therapy. The risk-benefit ratio of these options must be carefully considered.

The treatment of ICA stenosis is determined by clinical presentation and the degree of blockage.

Rehabilitation interventions, such as physiotherapy, occupational therapy or speech therapy are generally initiated during inpatient care and continued after discharge if indicated. Thus, a long-term neurological impairment may be reduced to facilitate functional recovery, i.e., improvement in mobility and activities of daily living.