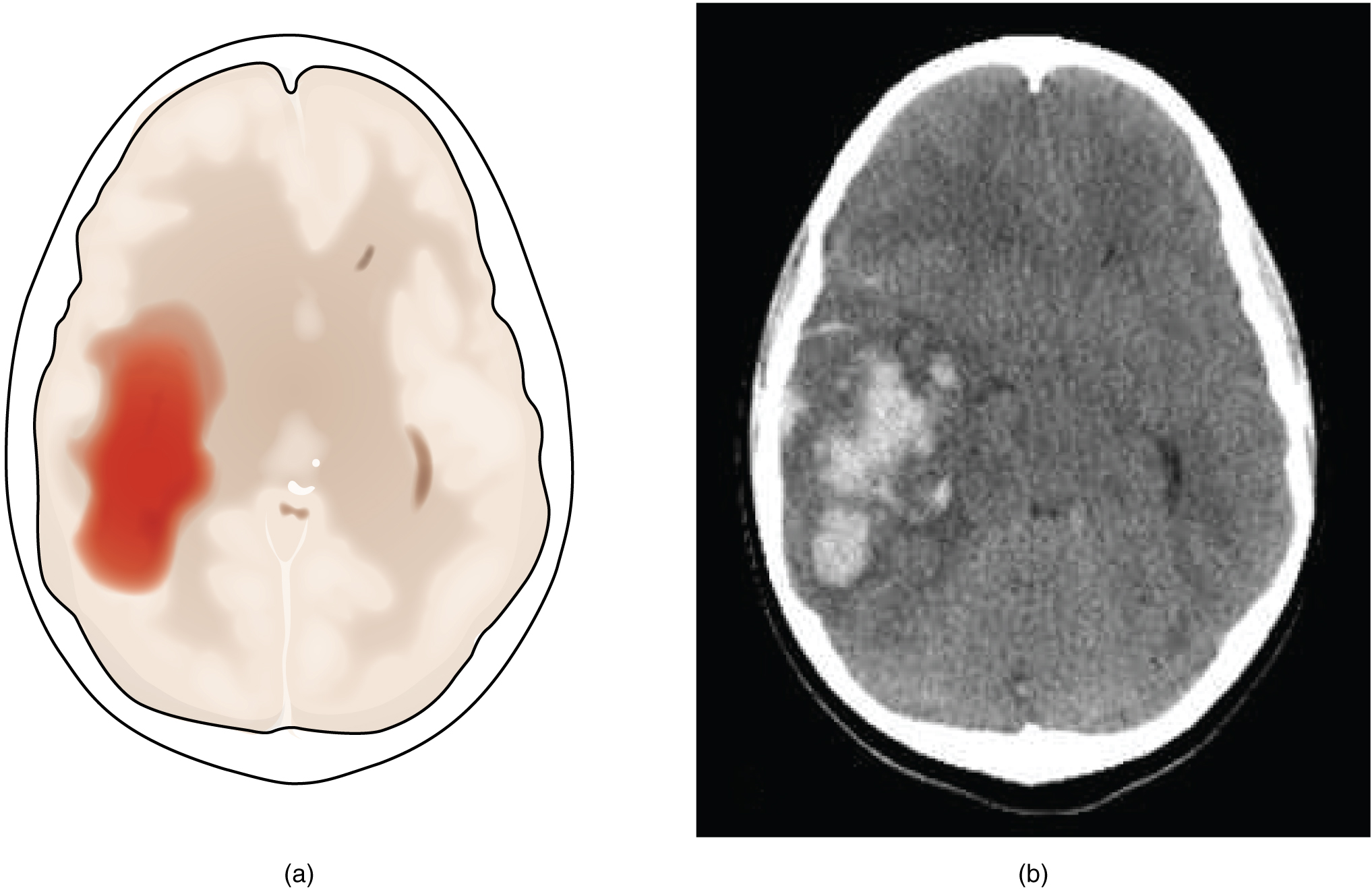 Image: “(a) A hemorrhage into the tissue of the cerebrum results in a large accumulation of blood with an additional edema in the adjacent tissue. The hemorrhagic area causes the entire brain to be disfigured as suggested here by the lateral ventricles being squeezed into the opposite hemisphere. (b) A CT scan shows an intraparenchymal hemorrhage within the parietal lobe. (credit b: James Heilman)” by philschatz. License: CC BY 4.0

Cerebral Hemorrhage within the Three Spaces

In the brain, bleeding can occur in the epidural, subdural, and subarachnoid spaces, depending on the cerebral membranes (meninges). The subarachnoid space differs from the other two spaces to the extent that it also exists physiologically in the brain. The epidural and subdural spaces, however, are artificially created by the accumulation of blood between the internal lamina of the calvaria and the dura mater (epidural hemorrhage) or between the dura mater and the arachnoid mater (subdural hemorrhage).

Image: Depiction of the spatial relationship of the structures between the bone and the brain with a pictorial representation of where epidural and subdural hemorrhages would be located. By Lecturio.

Craniocerebral injuries are among the most common causes of death until early adulthood and require immediate treatment. Oxygen is not stored in the brain. Therefore, the brain depends on blood vessels for the supply of oxygen and essential nutrients. Hemorrhage in the brain cuts off this supply, which results in death.

The clinical manifestations indicate the etiology. However, computed tomography (CT) is always indicated in emergency situations. The different types of bleeding can be distinguished based on radiologic criteria. 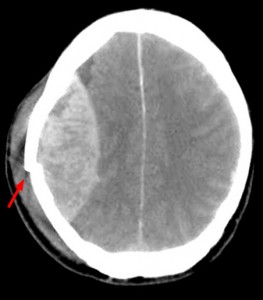 Image: Epidural hematoma at the fracture (arrow) of the skull. By Hellerhoff. License: CC BY-SA 3.0.

Epidural hemorrhage (epidural means ‘above the dura mater’) or extradural hemorrhage refers to bleeding between the inside of the calvaria and the outer periosteal layer of the dura mater. The source of the bleeding is usually arterial, most commonly originating in the middle meningeal artery or any of its branches, which are especially vulnerable to fractures in the skull because they are bound tightly to the cranial bone. Epidural hemorrhage is most commonly caused by head injury, generally associated with fractures of the skull (in 85–95% of cases), which are associated with malfunction or injury to the brain. A plain injury to the head is known as a ‘cranial contusion’ (bruise).

The phase in between is called the ‘free interval’ and is typical of epidural hemorrhage. The intracranial pressure is increased during the course of hemorrhage because of intracranial compression. 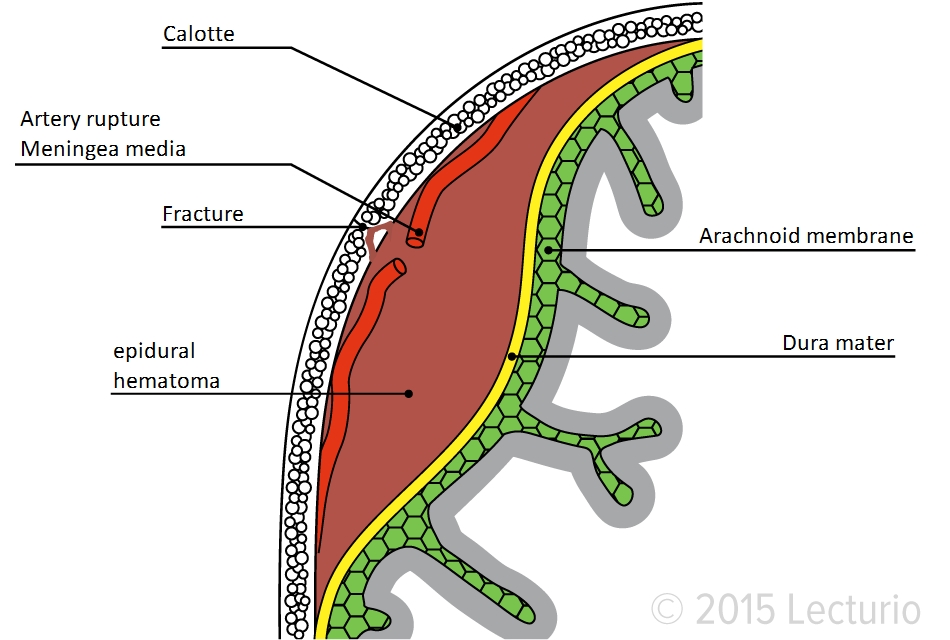 Image: Depiction of a skull fracture with rupture of the middle meningeal artery and the resulting ‘lens-shaped’ hematoma from an epidural hemorrhage. By Lecturio.

Symptoms associated with increased intracranial pressure include drowsiness, nausea and vomiting, seizure, and a steady decline in consciousness. In addition, there may be a so-called papilledema, also known as ‘optic disc swelling.’ Further, epidural hemorrhage leads to rapid compression of the two cerebral hemispheres, resulting in contralateral symptoms, including motor coordination disorder with symptoms of paralysis. The hemorrhage can lead to neurologic damage; because of this damage, the patient may be conscious at one moment and comatose at the next. Often, death occurs in minutes.

Epidural hemorrhage is a serious condition that warrants emergency treatment. After stabilizing the patient, a CT of the head is performed to detect or rule out any bleeding. Acute epidural hemorrhage appears in the CT as a hyperdense biconvex patch with a swirl sign. Magnetic resonance imaging (MRI) is another diagnostic method used to confirm epidural hemorrhage. X-ray examination is used to identify fractures and determine their impact on the dura mater. Angiography is also preferred to rule out laceration of the middle meningeal artery or extravasation of the artery into the middle meningeal vein, generally known as the ‘tram-track sign.’

Stabilization of the patient is the first priority in treating epidural hemorrhage; it may entail intubation of the patient depending on the level of consciousness. Advanced life support (ALS) protocols are focused on cervical spine control and airway, breathing, and circulation (ABC). Another important element of the treatment approach involves a prompt reduction of increased brain pressure via neurosurgical removal of large hematomas (collection of blood) or solid blood clots. It is accomplished via craniotomy, clipping of the source of the bleeding blood vessel (diathermy), or decompressive removal of hematoma; in this procedure, a hole is made in the calvaria (craniotomy) to relieve the pressure.

Intensive care to prevent or treat post-traumatic cerebral edema includes, among others, elevation of the upper body of the patient to as much as 30°, mechanical ventilation, administration of plasma expanders, administration of osmotic therapy (e.g., hyperosmolar solutions such as mannitol), and the administration of barbiturates or saluretics. Administering cortisone also lowers the intracranial pressure by reducing edema, but this treatment is not indicated in traumatic brain injury. Edema increases the rate of complications.

Note: No physiologically occurring epidural space exists in the brain. 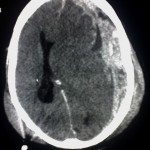 The most prominent clinical symptom is characterized by a rather slowly progressive so-called organic brain syndrome, as well as hemiplegic symptoms with focal failures that lead to focal seizures. A change in personality and impaired intellectual functions are part of organic brain syndrome, prompting patients to seek psychiatric aid.

A fluctuating level of consciousness, sleepiness, headache, and confusion are symptoms of subdural hemorrhage. Because of the slow development of subdural hematoma, it can become chronic and independent of previous trauma, and it may manifest in acute symptoms. The resulting neurologic deficits are limited to one part of the body (hemiplegic symptoms) and are often mistaken for an acute ‘stroke.’ 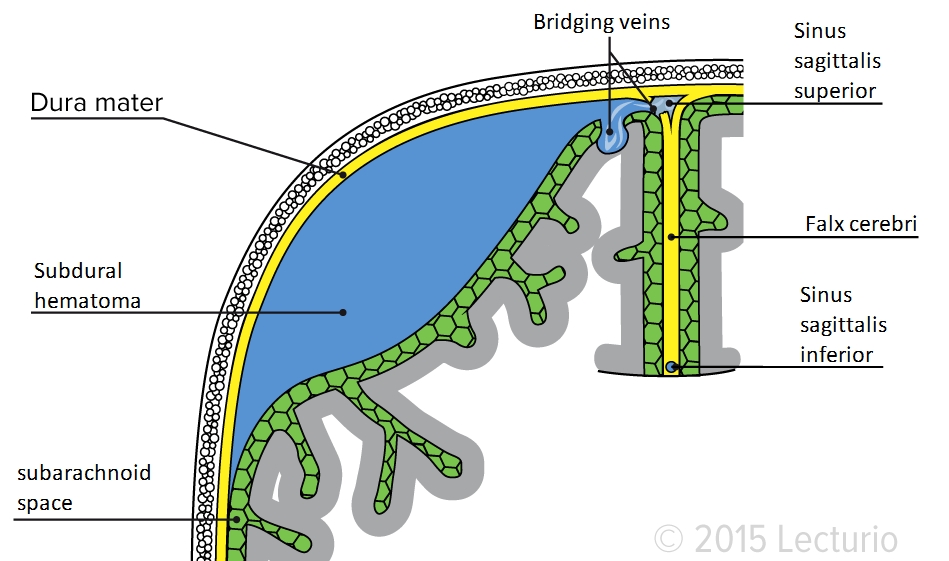 Image: Depiction of tearing of the bridging veins and the resulting ‘crescent-shaped’ hematoma from a subdural hemorrhage. By Lecturio.

The treatment of subdural hemorrhage is also based on the neurosurgical removal of the hematoma using a burr twist drill and burr hole craniotomy. The more quickly the hematoma is removed, the better is the prognosis.

Note: There is no subdural space in the brain. 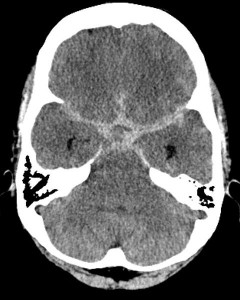 The most common cause of subarachnoid hemorrhage is a ruptured arterial aneurysm (blood vessel bulge) of the basilar arteries. This occurs in 40–50% of aneurysms, and therefore, the majority of them can be found on the anterior communicating artery, followed by the posterior communicating artery and the ophthalmic artery (20–30%). In addition to the innate (congenital) aneurysms, acquired aneurysms exist, for example, in connection with bacterial infection or trauma.

Other possible causes of subarachnoid hemorrhage include the following:

The bleeding occurs in the subarachnoid space, which also exists physiologically (meaning ‘below the arachnoid’). The bleeding itself can occur spontaneously or may be induced by trauma or other factors. Possible trigger factors mainly include activities that cause an increase in intra-abdominal pressure, such as coughing, bending, or lifting heavy loads.

However, bleeding may also occur during resting phases. A number of risk factors are associated with subarachnoid hemorrhage: hypertension, nicotine use, bleeding disorders, mycotic aneurysms, the decrease in estrogen levels after menopause, and alcohol abuse. Possible complications in the course of subarachnoid hemorrhage include vasospasm of the vessels (especially from day 3 to day 10 after the bleeding), recurrent bleeding, and hydrocephalus aresorptivus.

The most characteristic symptom of subarachnoid hemorrhage is the sudden onset of the so-called thunderclap headache, which is located in the neck and in the forehead region. Neck stiffness (meningism) may occur as a result of meningeal irritation. Other possible symptoms include nausea, vomiting, photophobia, collapse, seizures, a decreased level of consciousness, or coma, which are attributed to increased intracranial pressure. Headaches can also occur as a warning symptom of an impending aneurysm bleed.

A sample of the cerebrospinal fluid (CSF) can be obtained via lumbar puncture. However, it is important that previous contraindications must be excluded before performing this procedure. Xanthochromic blood is detected in the CSF because of the presence of bilirubin from the breakdown of hemoglobin. Contraindications include increased intracranial pressure or a low platelet count. In addition to lumbar puncture, CT and angiography facilitate the diagnosis of subarachnoid hemorrhage. CT can be used to detect intraparenchymal or intraventricular hemorrhage as hyperdense areas. Angiography is especially indicated for the precise localization of the aneurysm.

Two options are available for the treatment of aneurysm: clipping, in which the aneurysm is neurosurgically eliminated externally, and coiling, in which metal spirals (coils) are inserted inside the aneurysm through the blood vessels via a catheter in order to seal the aneurysm. Intracranial stents and balloon remodeling can be used to treat wide-necked aneurysms.

Summary of the Differences

The outcomes of cerebral hemorrhage depend on the type and size of bleeding and the possible comorbidities. The precise localization of the bleeding also plays a crucial role in determining whether the damage is permanent. Pertinent examples may be permanent speech disorders (aphasia), motor dysfunction, or sensory disturbances due to a central nervous system (CNS) deficit. Hydrocephalus and raised intracranial pressure are some of the complications. Early rehabilitation is critical to minimize lasting damage. Patient rehabilitation is initiated during the hospital stay and continues in specialized institutions.

Coma as a consequence of brain hemorrhage

Coma is a possible consequence of cerebral hemorrhage; coma is one of the quantitative disorders of consciousness and is characterized by the inability to be awakened by any external stimulus. Consequently, coma may also be defined as brain death, the irreversible failure of the brain.

Cerebral hemorrhage occurs alongside cerebral ischemia, one of the main causes of coma. Other conditions that result in coma include encephalitis and severe brain trauma. Initially, comatose conditions warranting immediate intervention, such as intoxication or related metabolic disorders (diabetes mellitus, uremia, and hepatic coma) are excluded. Therefore, laboratory examination is part of the diagnosis of a comatose patient, including the determination of the blood count, blood sugar levels, liver and kidney parameters, electrolyte levels, thyroid levels, and other parameters subject to clinical suspicion.

Third-party anamnesis to establish a tentative diagnosis is especially important because it can suggest initial etiologic insights into a coma. In addition, a neurologic examination of the patient is conducted, which may indicate the severity and location of the injury. Based on the Glasgow Coma Scale (GCS) score, the severity of the disturbance of consciousness can be quantified on the basis of a score ranging from 3 to 15, with higher scores indicating a better prognosis. Additional procedures, such as CT or MRI, may be indicated for definitive diagnosis.

Significant chances of rebleeding in the cerebral spaces during the first 2 months can have life-threatening consequences.