Cerebral edema is defined as the excess accumulation of water in the intracellular and extracellular spaces of the brain.

Though cerebral edema is common, as it occurs as a secondary occurrence following other primary brain conditions, it is rarely reported due to the complexities associated with its diagnosis.

Cerebral edema can occur if cells of the brain become damaged (i.e. cytotoxic edema) or if blood vessels get injured (i.e. vasogenic edema). Cellular and blood vessel damage results in the release of glutamate into the extracellular space (i.e. excitotoxicity) and entry of calcium and sodium into the cells. The sodium-potassium ATP pump pushes out some of the calcium, causing sodium accumulation within the cell. This sodium accumulation creates an osmotic gradient that pulls water into the cell, resulting in intracellular edema and cell swelling. Calcium accumulation within cells of the brain results in the activation of intracellular cytotoxic processes which can result in apoptosis. Moreover, the formation of inflammatory mediators such as c-foc, c-jun, and cytokines get activated.

Broadly speaking, cerebral edema can be of either vasogenic origin or cytotoxic/cellular edema. However, many are the times when smaller categories of four types of cerebral edema are used in practice. They include:

Vasogenic cerebral edema is caused by disruption of the blood-brain barrier, resulting in the influx of fluid and solutes into the brain. This is the most common type of brain edema and mainly affects the white matter of the brain.

Osmotic cerebral edema results from abnormal levels of osmolarity in plasma and fluids within the brain. The brain plasma may have lower osmotic levels following dilution, i.e. from SIADH secretion or increased volume intake, causing the high osmotic brain matter to pull water from the plasma leading to cerebral edema.

We can summarize the causes of cerebral edema according to the following classification:

Cerebral edema is intrinsically asymptomatic. Symptoms start to arise once the intracranial pressure reaches a level that is sufficient to cause local ischemia.

Symptoms of increased intracranial pressure include:

When evaluating the brain computed tomography scan of a patient suspected of having cerebral edema, one should focus on the appearance of the white matter. Other features that suggest increased intracranial pressure include flattened gyri and narrowed sulci as well as compression of the ventricles. Brain computed tomography scans should be ordered during the follow-up period to monitor the resolution of brain edema once treatment is initiated.

Patients with epidural and intracerebral hematomas due to traumatic brain injury typically have white matter confined cerebral edema without apparent involvement of the cortex.

Magnetic resonance imaging is superior to computed tomography scans in detecting brain abscess which can be the cause of cerebral edema in septic patients with focal neurological deficits. 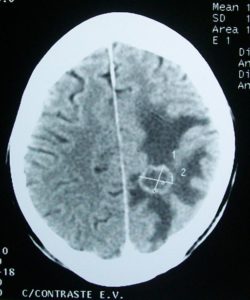 The electroencephalogram is not useful in evaluating cerebral edema; however, it may be helpful in a subgroup of patients with an epilepsy disorder as the cause of cerebral edema, i.e. status epilepticus.

While our understanding of cerebral edema and its pathogenesis have expanded dramatically in the last decade, treatment options are still limited.

Mannitol is the most common osmotic agent used, which decreases the intracranial pressure dramatically by decreasing the overall water content of the brain, reducing blood volume by vasoconstriction, and reducing cerebrospinal fluid volume. Mannitol also decreases blood viscosity, improves cerebral perfusion, and may have a cytoprotective effect. The most commonly used dose of mannitol for cerebral edema is a bolus dose of 1 g/kg followed by 50 g every 2–3 hours.

Glycerol can also be administered in oral doses of 30 mL every 4–6 hours for its osmotic effects as an alternative to mannitol.

Loop diuretics such as furosemide can be administered after the administration of mannitol as they prolong the osmotic effects of mannitol. The typical dose of furosemide is 0.7 mg/kg.

Currently, barbiturates and procaine derivatives are no longer recommended in the management of acute cerebral edema. Therefore, patients who fail to respond to the previous medical treatments of cerebral edema might need surgical intervention to decompress the swollen brain.

Patients with life-threatening brain-shifts might need a temporary ventriculostomy or a decompressive craniectomy as these procedures may be life-saving. Patients with large cerebral and cerebellar infarcts with cerebral edema should also undergo surgical decompression as a life-saving measure.