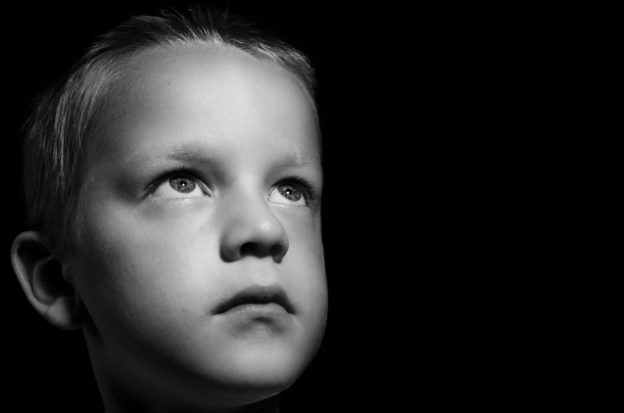 Overview of CNS Tumors in Children 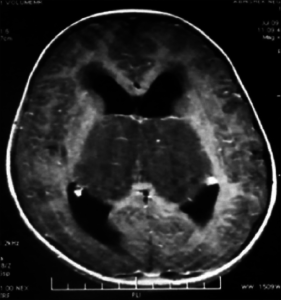 Brain tumors in children are rare but considered as the second most common form of cancer in the pediatric population. Brain tumors usually originate from neural elements within the central nervous system that have the potential to undergo proliferation. Possible malignant neoplasms of the CNS are the following:

Possible benign neoplasms of the CNS are the following:

Epidemiology of CNS Tumors in Children

Central nervous system tumors collectively account for approximately 20 % of all pediatric cancers. The estimated annual incidence of CNS tumors is around 5 per 100,000 children in the United States.

The median age of presentation of CNS tumors in children is estimated to be around 9 years with male predominance in the ratio of boys to girls of 1.2:1.

Primary CNS tumors are more common compared to secondary metastatic disease to the brain in children.

Pathology of CNS Tumors in Children 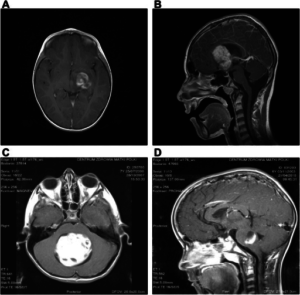 Some common examples of neuroepithelial tissue in origin brain tumors include:

The most common type identified in the pediatric population is astrocytic tumors followed by pilocytic astrocytoma.

The second most common form of brain tumors arises from neuronal tissues. Desmoplastic infantile ganglioglioma, gangliocytoma, and ganglioglioma are possible examples of neuronal tissue brain tumors in children. Dysembryoplastic neuroepithelial tumors deserve a special mention here because they are known to be associated with medically-intractable epilepsy that can be cured by surgical resection of the tumor.

Oligodendroglial tumors and ependymal tumors are also common in children. Some examples of these types of tumors include oligodendroglioma and ependymoma. Both tumors can be anaplastic. Meningiomas are rare in pediatrics compared to adults.

Spinal tumors are usually of the pilocytic astrocytomas type, but meningiomas, schwannomas, and osteoma have been all described in children. These tumors are much rarer compared to brain tumors.

Etiology of CNS Tumors in Children

The previous history of CNS tumors also put the child at an increased risk of acquiring the recurrent disease, especially if the primary tumor was considered as a high-grade tumor. Previous radiotherapy is another understandable possible risk factor for CNS tumors in children.

Most CNS tumors share similar features to other cancers where genetic and DNA alterations are evident and the cells lose the ability to undergo apoptosis. Once the highly dysplastic cells become immortal, clonal expansion ensues and the tumor arises. The exact cause of having a peak of incidence of CNS tumors in children aged 9 years old is poorly understood.

The most common presentations of brain tumors, especially supratentorial tumors, are headaches and focal neurological deficits. This finding can be explained by the fact that the majority of these tumors are within the cortical hemispheres, hence the presence of neurological deficits. Seizures are also common with supratentorial tumors, especially those of the dysembryoplastic neuroepithelial tumor type.

Infratentorial tumors are more likely to cause hydrocephalus due to the obstruction of the fourth ventricle. Posterior fossa syndromes and cerebellar ataxia are also common with infratentorial tumors which can be also explained by the pathophysiology of these tumors; hence, their location is within the cerebellum.

Signs and symptoms are:

Though most patients are diagnosed by 6 months since the presentation, unfortunately, most patients who present with CNS tumors have non-specific symptoms, such as headaches or seizures alone, and the diagnosis is usually delayed up to 6 years. Spinal tumors can cause low back pain, focal motor deficits, and scoliosis.

Previous medical history can also lower the physician’s threshold towards making the diagnosis of CNS tumors. A history of neurofibromatosis types 1 or 2 and tuberous sclerosis is known to put the patient at an increased risk of CNS tumors, and seizures.

Laboratory investigations are helpful in CNS tumors as they can detect certain known complications, such as hypercalcemia and elevated levels of the inappropriate antidiuretic hormone. A complete blood cell count is also indicated to exclude primary CNS lymphomas.

Coagulation tests are indicated because patients with CNS tumors are at an increased risk of bleeding and thrombotic events for obscure reasons.

The most important diagnostic test in the workup of CNS tumors in children is neuroimaging. Patients who present with suggestive symptoms of a CNS tumor should first undergo an ophthalmic examination to exclude papilledema, which is a sign of elevated intracranial pressure.

One, however, should remember that supratentorial tumors in children are the most common type of brain tumors and they are less likely to cause elevated intracranial pressure compared to infratentorial tumors. 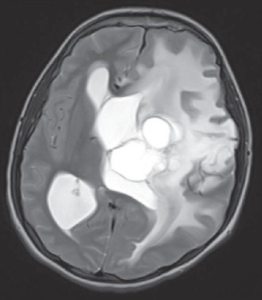 The first imaging study to be obtained in a child with a suspected brain tumor is a computed tomography scan. Computed tomography is very helpful in excluding emergency causes of neurological deficits such as intracranial hemorrhage.

When intravenous contrast is used, a brain tumor might be hypodense, isodense or hyperdense on the computed tomography scan. Therefore, this imaging modality is useful in excluding emergencies and providing evidence for a possible brain tumor but is not helpful in the identification of the exact histological type of the tumor.

Magnetic resonance imaging (MRI) scans are needed in the evaluation of CNS tumors in children. MRI is known to be superior to computed tomography scans, especially for infratentorial tumors. The exact delineation of supratentorial tumors is also known to be better appreciated with MRI scans. Gadolinium-based contrast, which has been proved harmless, is usually used to enhance the sensitivity of MRI to detect brain and spinal tumors.

While certain tumors are known to have some characteristic features on neuroimaging techniques, most CNS tumors usually need to be histologically classified in a subsequent step. Large tumors that are partly accessible and craniopharyngiomas can be biopsied for histological classification and grading before surgical intervention. Endoscopic intraventricular biopsies are also a possibility for infratentorial tumors that are within the ventricles or near them.

A stereotactic-guided needle biopsy is the most commonly used procedure for obtaining a biopsy of a brain tumor in children, followed by surgical biopsies that are excised through a craniotomy.

Treatment of CNS Tumors in Children 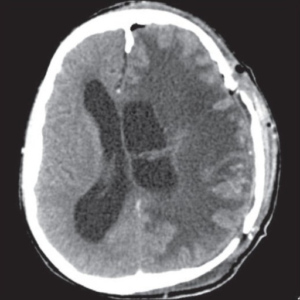 Patients who have CNS tumors usually undergo brain mapping before the excision procedure to identify potential loss of function post-operatively. In approximately 17 % of the patients, partial resection is the only possible option that can help alleviate the symptoms but not significantly adversely affect the quality of life of the child.

Patients with anaplastic ependymomas, medulloblastomas and craniopharyngioma are more likely to need a re-operation compared to other pathological types of CNS tumors. The most common cause of a re-operation is tumor relapse or progression which is reported to happen in about 10 % of the cases.

Most children do well postoperatively without any significant neurological deficits. Possible complications of surgical intervention for CNS tumors in children include:

Fortunately, these complications are rare.

Reactive cerebral edema is a common complication of CNS tumors in children. Patients who develop cerebral edema might benefit from the administration of intravenous dexamethasone. Patients with elevated intracranial pressure should be managed surgically if possible because the use of mannitol in this scenario has been associated with rebound elevation in intracranial pressure.

The histological classification of the CNS tumor also plays a role in the decision to provide adjunctive radiotherapy or chemotherapy. Astrocytomas that are low-grade are usually managed with surgery alone, but patients who have high-grade astrocytomas might benefit from radiotherapy after the resection surgery.

Ependymomas are associated with a high risk of recurrence, especially anaplastic ependymomas, and radiation therapy is recommended after surgical intervention.

Patients with medulloblastomas should undergo surgery, radiotherapy, and chemotherapy because the risk of recurrence is very high especially with posterior fossa medulloblastoma. Possible chemotherapeutics for CNS tumors include: