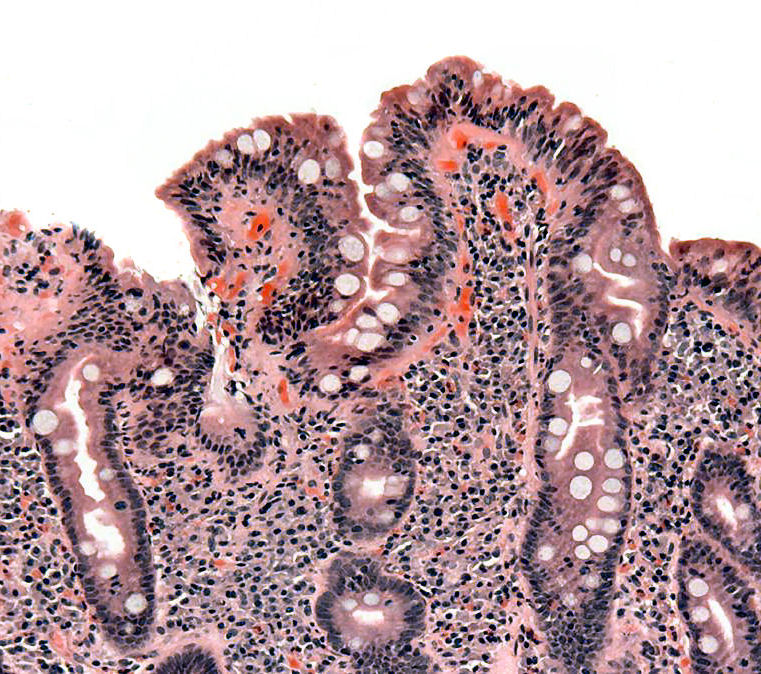 Celiac disease is the intolerance to gliadin, a component of the protein gluten. When a person with celiac disease ingests gliadin, it triggers an inflammatory response in the intestinal mucosa, resulting in the malabsorption of food nutrients.

Almost all the cereal types that are cultivated and consumed in Europe and the United States contain gluten.

In the Western population, it is estimated that about 1 in 100 people have celiac disease. However, the incidence rates vary strongly between regions, with the highest rates found among White Europeans. The trend is rising and it is assumed that there is a high number of undiagnosed cases due to very mild forms or delayed courses of the disease.

The cause of celiac disease is inconclusive. There is, however, a strong genetic disposition: The receptor proteins HLA-DQ2 or HLA-DQ8 can be found in almost all patients with celiac disease.

Note: Many autoimmune diseases are associated with celiac disease.

Gliadin triggers an inflammatory response in the lamina propria of the small intestine. An often tested fact: In gluten-sensitive persons, the enzyme tissue transglutaminase (tTG) connects gliadin with proteins of the connective tissue, forming new antigen structures. These structures, in turn, trigger destructive inflammation processes in the mucosa of the small intestine, which results in lymphocyte infiltration and villous atrophy.

The inflammation diminishes the resorptive surface of the intestine and leads to severe malabsorption and maldigestion of all food nutrients. 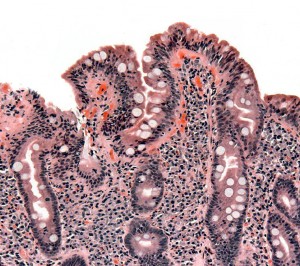 Celiac disease is characterized by mucosal changes, especially the blunting of villi, crypt hypertrophy, and inflammatory infiltration of cell structures into the mucosa.

The appearance of the mucosa can vary, from inconspicuous mucosal folds to fold scalloping and even completely reduced mucosal folds.

As the disease progresses, even a narrowing of the Kerckring folds can be found. Other findings include the following:

About 3–4 months after introducing an infant to cereal products such as porridge or bread, i.e. starting with the second year of life, the first symptoms may manifest. If celiac disease is not recognized as such, serious sequelae might develop.

Initial symptoms include the following:

If the disease has already progressed, the following cardinal symptoms may become apparent:

If left untreated, celiac disease can result in severe sequelae, such as the following:

Note: With adult patients or when the clinical presentation is not comprehensive, celiac disease should still be considered.

As mentioned above, starting with the second year of life, attention should be paid to any failure to thrive and to unusual signs of mood swings or severe diarrhea.

Increased levels point to celiac disease and can cause dermatitis herpetiformis, a chronic skin disease marked by herpes-like vesicles and strong pruritus.

General screening for antibodies can increase the chance of detecting celiac disease early, but only a biopsy of the small intestine can provide a definitive diagnosis. 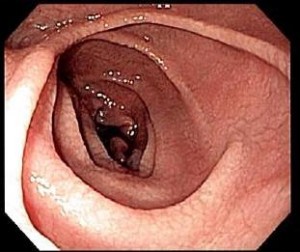 Image: ‘Endoscopic image of duodenum in an individual with celiac disease, showing scalloping of the folds and cracked-mud appearance of the mucosa.’ By Samir at en.wikipedia. License: CC BY-SA 3.0.

Based on dietary history, weight gain patterns, and clinical findings including laboratory and imaging studies, further diagnostic considerations can be explored.

The following conditions should be considered as possible differential diagnoses: 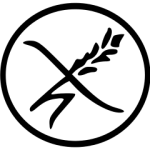 Logo of a gluten-free certification program

Celiac disease is incurable; however, the right diet and lifestyle can manage this disease.

The gold-standard treatment is a permanent gliadin-free diet, which excludes any food products that are based on cereal grains such as wheat, rye, oat, or barley.

In the beginning, an additional substitution of vitamins and iron accompanies this diet, and soon, the mood should improve, the appetite should increase, and diarrhea should diminish.

Prevention and Prognosis of Celiac Disease

A gluten-free diet should result in normalization of the IgA endomysial antibody titers.

There are investigations into supplemental medication, especially for oligosymptomatic patients, to increase their tolerance of minor amounts of gluten. Most efforts are currently aimed at the development of tTG inhibitors.

A protective influence has been attributed to breastfeeding (also against other allergic diseases). Currently, there is a European study being performed regarding a possible protective effect that the introduction of minimal doses of gluten into baby food might have.