Arteries in the Neck: The Carotid Arterial System | Lecturio 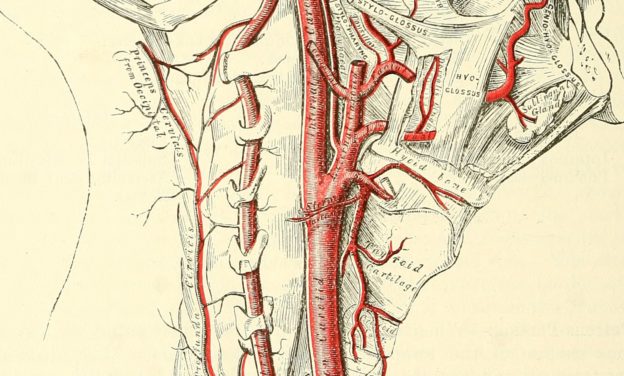 The Arteries of the Upper Body

The 3 major vessels branching off from the arch of the aorta are: 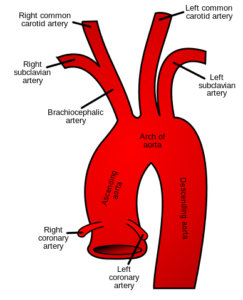 The brachiocephalic artery (also known as the innominate artery) is the first branch of the arch of the aorta, which supplies the right side of the body above the heart. This vessel bifurcates behind the sternoclavicular joint into:

The left common carotid artery and left subclavian artery arising directly from the arch of the aorta to supply similar territories on the left side of the body.

The common carotid artery on either side bifurcates at the level of the upper border of the thyroid cartilage into:

Note: The common carotid artery has no branches proximal to the bifurcation.

The right common carotid artery has the cervical part only. 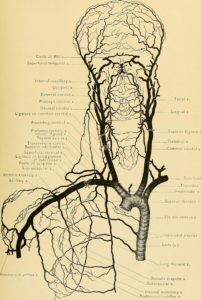 In the chest, the left common carotid artery has the following anatomical relations:

Both the common carotids have similar relations in the neck and move obliquely upwards towards the thyroid cartilage where they divide into external and internal carotid arteries. These pass behind the sternoclavicular joint initially separated from each other by the trachea, and later by the thyroid gland and laryngeal cartilages. 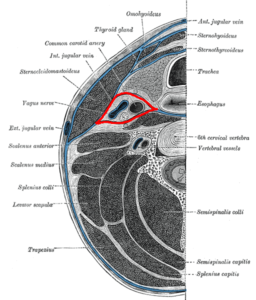 The common carotid artery is covered by the superficial fascia, the platysma muscle, deep cervical fascia, and the neck muscles, like the sternocleidomastoid, sternohyoid, sternothyroid, and omohyoid in the lower neck.

The common carotid artery is relatively superficial in the upper part of the neck, covered merely by the superficial fascia, the platysma muscle, deep cervical fascia, and medial margin of the sternocleidomastoid muscles.

Branches of the Common Carotid Artery

At the level of the thyroid cartilage at approximately the 4th cervical vertebra, the common carotid artery bifurcates into:

The common carotid artery does not give any branch proximal to the bifurcation.

The external carotid artery, just as the name suggests, is relatively superficial in its path and supplies superficial structures and parts of the neck and face.

The internal carotid artery, as the name suggests, takes a deeper route and supplies structures within the brain and the orbits. It has no branches in the neck, hence, will not be discussed further in this article.

The carotid body is a small, oval-shaped, reddish-brown body that consists of a cluster of chemoreceptors and is present at the bifurcation of the common carotid artery. The carotid body functions as a sensor and detects changes in the arterial blood composition by detecting partial pressure of oxygen and changes in blood pH.

Pulse: The common carotid artery is often used to measure pulse, especially in patients with shock and in those with an undetectable peripheral pulse.

The common carotid artery is palpated below the angle of the mandible and at the upper border of the thyroid cartilage on the anterior border of the sternocleidomastoid muscle. If a carotid pulse is present, systolic blood pressure is often estimated to be more than 40 mm Hg.

Some clinical issues associated with the carotid arteries include:

The external carotid artery starts at the upper border of the thyroid cartilage; initially curving upward and moving forward, then inclining backward to space just at the back of the neck of the mandible, giving terminal branches known as the superficial temporal artery and the maxillary artery. 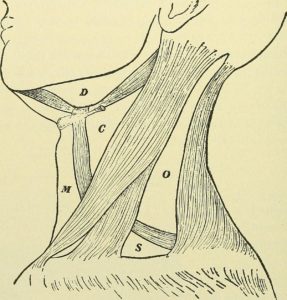 At the origin, the external carotid artery is more superficial and lies within the carotid triangle of the neck which is a sub-triangle within the anterior triangle of the neck (labeled ‘C’ in the image). More specifically, the external carotid artery is bounded by the posterior belly of the digastric muscle (superiorly), the superior belly of the omohyoid muscle (inferiorly), and the sternocleidomastoid (laterally).

Branches of the External Carotid Artery

The branches of the external carotid artery can be subdivided into groups:

Branches arising within the carotid triangle 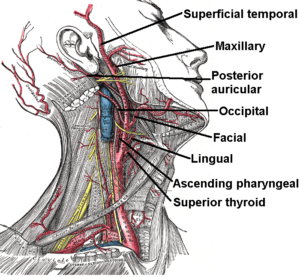 B. Medial or deeper branch

Occipital artery – supplies the occipital part of the scalp

Maxillary artery – larger of the two terminal branches, has three parts which are further divided into multiple branches and supplies the deep structures of the face

Relations of the external carotid artery

The external carotid artery is anteriorly covered by the skin, superficial fascia, platysma muscle, deep fascia, and anterior margin of the sternocleidomastoid muscle.

The hypoglossal nerve, the lingual, common facial and superior thyroid veins cross thise EC artery in the neck while the posterior belly of the digastric and stylohyoid muscle cross anteriorly.

Near its origin, the superior laryngeal nerve is posterior to the EC artery (and then goes medially). Superiorly, it is separated from the internal carotid artery by the styloglossus and stylopharyngeus muscles, the glossopharyngeal nerve, the pharyngeal branch of the vagus nerve, and the deep lobe of the parotid gland.

The Arteries of the Head and Neck via theodora.com

The External Carotid Artery via bartleby.com