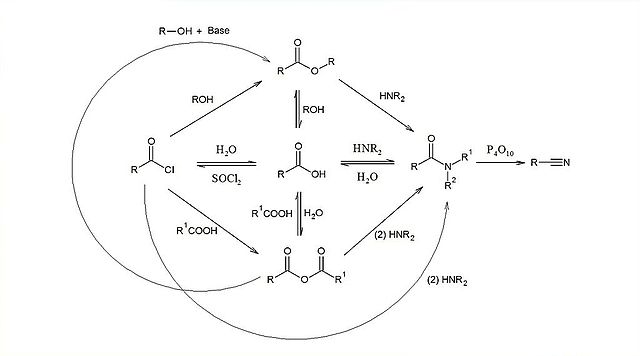 Nomenclature: In the naming of carboxylic acids, the –e at the end of the corresponding alkane is replaced with –oic acid.Carboxylic acids, RCOOH, are one of the most commonly encountered organic compounds. The reactivities of carboxylic acids are centered around the –COOH functional group, specifically due to the inherent polarity of the carbonyl (C=O) group contained within it. The most electron-rich site for the compound is the carbonyl oxygen, while the most electron-poor site is the hydrogen atom attached to the OH group, resulting in the relative polarity of the compound.The –COOH functional group also affects the physical properties of the compound. Carboxylic acids have relatively higher boiling and melting points compared to hydrocarbons and other oxygen-containing organic compounds of similar size and shape.The main factor contributing to the differences in the physical properties of carboxylic acids is the possibility of hydrogen bonding through two oxygen atoms present within its structure. The 2 oxygen atoms are tightly held by hydrogen bonds, making the compound harder to convert from one state to another.

Carboxylic acids are considered weak acids as they can donate a proton (H+), to a small extent. When a proton is eliminated from the –OH group of the compound, the electrons in the remaining –COO– group exhibit resonance, causing a slight stabilization of the resulting anion.

Common replacements of the –OH group:

Below are some examples of these carboxylic acid derivatives.

“Structure of Carboxylic acid and its derivatives” by Mark Xavier Bailon

The simple way of naming carboxylic acids is by counting the number of carbons in the longest continuous chain that includes the carboxyl carbon. The –e in the alkane or alkene name corresponding to the identified number of carbons is then replaced with –oic acid. The table below shows some of the common carboxylic acids with their systematic names.

Table 1: Examples of carboxylic acids and their systematic names 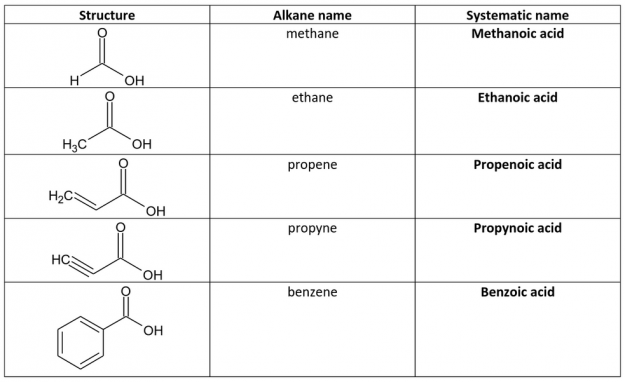 In most of the examples above, the only prominent functional group is the carboxylic acid group. 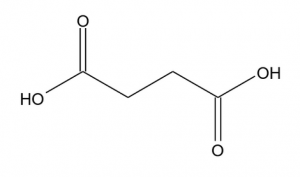 Because of the inherent polarity of the carbonyl C=O bond, carboxylic acids are prone to attack via nucleophilic substitution reaction. Just like in aldehydes, the nucleophile attacks the carbonyl carbon, forming a tetrahedral intermediate and, in the process, producing different possible carboxylic acid derivatives. In a nucleophilic acyl substitution reaction, elimination of one of the 2 substituents attached to the carbonyl carbon takes place as the nucleophile attaches itself to that carbon atom.

Unlike in aldehydes and ketones where an –H or other alkyl substituent is attached to the carbonyl carbon, substituents in a carboxylic acid (or its derivatives) are good leaving groups. Since the –H and alkyl groups in aldehyde or ketones are not good leaving groups, they undergo nucleophilic addition, whereas carboxylic acids undergo nucleophilic substitution. The general mechanism for this type of reaction is shown in the figure:

Steric factors are an important consideration for assessing reactivity because the presence of bulky groups significantly affects the rate of the first step in derivative production; the bulkier the alkyl group attached to the carbonyl carbon, the harder it is for the nucleophile to attack the carbonyl carbon.

The polarization of acyl compounds is also important in predicting the reactivities. More strongly polarized acyl compounds react more readily than less polar ones. This means, for example, acyl chlorides will react faster in nucleophilic substitution compared to the less polarized amides.

“Mechanism of the hydrolysis of acyl chloride” by Mark Xavier Bailon

An aminolysis reaction is possible for esters using ammonia or amines as nucleophiles. However, this reaction is not commonly employed, as the use of acyl halides lead to faster reactions.