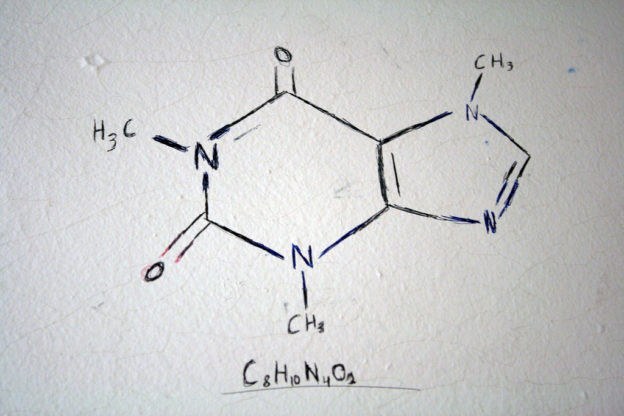 In organic chemistry, carbonyl compounds are a functional group consisting of a carbon atom with a double bond to an oxygen atom. Many different kinds of carbonyl compounds are present in nature. They all contain an acyl group (R-C=O) with another substituent attached to it. The R part of the structure can be any alkyl, alkenyl, or alkynyl, or have other functional groups attached to it.

Bonded to the other side of the acyl group is either hydrogen, carbon, oxygen, nitrogen, sulfur, or a halogen. Depending on the different substituents attached to the acyl group, different types of compounds can be formed.

Carbonyl compounds are generally divided into 2 groups. One category is composed of the aldehydes and ketones, the other composed of the carboxylic acids and their derivatives. These two groups generally differ in their kinds of chemistry and reactions.

Aldehydes and ketones, having an H or a C bonded to the acyl group, can’t participate in nucleophilic substitution reactions because these two atoms cannot stabilize a negative charge. These substituents cannot participate as a leaving group in nucleophilic substitution reactions due to their inability to stabilize negative charges.

For carboxylic acid and its derivatives, the atom directly attached to the acyl group (oxygen, nitrogen, sulfur, halogen) can stabilize negative charges and, therefore, can participate in nucleophilic substitution reactions.

The carbonyl group is a functional group composed of carbon and oxygen atoms connected by a double bond. The hybridization of the carbon atom is sp2 and therefore forms three σ bonds and one π bond. The oxygen atom, on the other hand, forms one σ and π bond with the carbonyl carbon and has 2 non-bonding pairs of electrons.

The difference between the electronegativity values of carbon and oxygen produces a strongly polarized double bond. The oxygen atom is more electronegative and, therefore, has a higher tendency to attract electrons, creating a partially negative end. In turn, the carbon atom becomes partially positive from the pull of electrons toward the oxygen atom.

Nomenclature of Aldehydes and Ketones

In naming aldehydes and ketones, the terminal –e of the corresponding alkane is replaced by –al or –one, respectively. For aldehydes, the parent chain should contain the –CHO group. If the aldehyde functional group is the functional group of highest priority, the carbonyl carbon is assigned as carbon 1. For example, in the case of propane, when two of the hydrogen atoms on the terminal carbon are replaced by an oxygen atom double bonded to the carbon atom, the name of the aldehyde described is propanal.

“Structures and names of some aldehydes.” by Mark Xavier Bailon

Ketones are named by replacing the terminal –e of the parent hydrocarbon with –one. For compounds containing ketone as the functional group of highest priority, the parent chain is the longest chain containing the ketone functional group. The assignment of a carbon number proceeds in the direction giving the carbonyl carbon the lowest possible number. In the new International Union of Pure and Applied Chemistry (IUPAC) system of naming, the locant number is placed before the suffix.

The parent compound is pentane as it is a 5-carbon alkane. The lowest possible number for the carbonyl carbon is 2 when counting is started from the rightmost carbon atom. In this case, the name of the compound will be pent-2-one.

A nucleophile is any chemical species that has a high electron density and is attracted to an electrophilic atom in another molecule, such as the low electron density of the carbonyl carbon.

The carbonyl group provides a site for nucleophilic addition (also known as nucleophilic attack) and increases the acidity of the hydrogen atoms attached to alpha carbon. These two effects are consistent with the structure of the carbonyl groups and are due to the ability of oxygen to incorporate a negative charge.

Reactions of aldehydes and ketones are limited to nucleophilic addition reactions only. The attack of the nucleophile is through the electrophilic carbon atom of the target molecule. The electrophilic carbon atom becomes somewhat electron-deficient due to the pull of electrons toward the oxygen atoms. Because of this, the carbonyl carbon becomes highly susceptible to a nucleophilic attack. Only addition of the nucleophile occurs since the H and C atom in the substituent is not a good leaving group.

In the process of attachment, the double bond between carbon and oxygen is removed, and a localized negative charge transfers to the oxygen atom forming an alkoxide intermediate. Protonation of the intermediate results in the formation of a neutral alcohol addition product. Below is the mechanism of the nucleophilic addition reaction:

Carbohydrates are an important carbonyl compound found in nature. They are composed of a long carbon chain as well as a carbonyl group or groups and are mainly synthesized by a process called photosynthesis. In photosynthesis, plants facilitate the reaction between carbon dioxide and water, in the presence of solar energy, through enzymes present in the plant’s cells, producing carbohydrates and oxygen molecules.

Carbohydrates are a broad class of polyhydroxylated aldehydes and ketones and are generally called sugars. The term carbohydrate was derived from glucose having the molecular formula of C6H12O6 and was originally thought to be a hydrate of carbon.

The presence of the hydroxyl group in glucose enables it to form a ring instead of being an open-chain aldehyde. In the case of glucose, the hydroxyl group attached to carbon 5 attacks the carbonyl carbon through the nucleophilic addition mechanism.

Since the attack can occur from the top or from the bottom, the cyclic form of glucose can either be in alpha or beta form. When the –OH group in the anomeric carbon (original carbonyl carbon) is down, the molecule is in alpha form, and when the –OH group is up, it is in its beta form. The specific forms (also known as conformations) of these sugar molecules are important as they affect their reactivity and ability to be metabolized by the body.

Carbohydrates provide more than 50% of the energy needed for metabolism, growth, repair, secretion, absorption, excretion, and mechanical work. Metabolism of carbohydrates includes reactions experienced by carbohydrates from food sources or those formed from compounds of other carbohydrates. The oxidation of this type of carbohydrate allows energy storage in the form of glycogen, synthesis of non-essential amino acids, and production of fatty acids in the presence of an excess of carbohydrates.

Oxidation and reduction reactions occur simultaneously when electrons are transferred. When a molecule is oxidized, it gives up an electron to a neighboring molecule which becomes reduced upon gaining the electron.

In general, aldehydes are more reactive than ketones because they are less hindered due to the presence of only an H atom instead of an alkyl group as their substituent. Therefore, aldehydes can also participate in other types of reactions depending on the reaction conditions.

On the other hand, both aldehydes and ketones can undergo reduction reactions. Both can react with reducing agents, such as sodium borohydride or hydrogen gas, in the presence of a Lindlar’s catalyst to produce alcohol. Aldehydes produce primary alcohols through reduction, while ketones produce secondary alcohols. 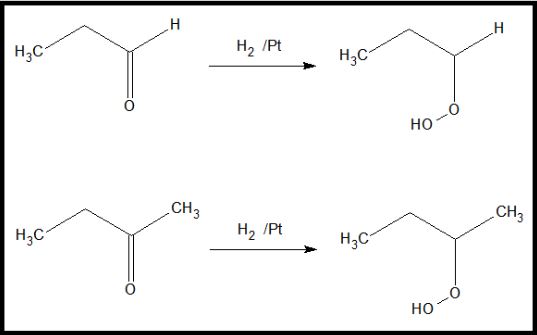 “Reduction Reactions of Aldehydes and Ketones.” by Mark Xavier Bailon