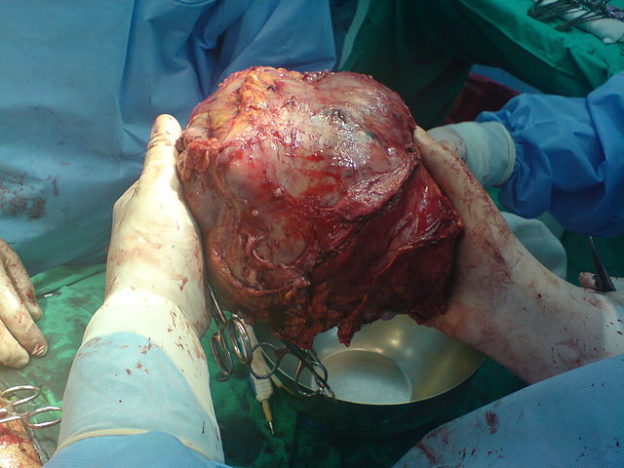 Primary hepatic neoplasms arise from liver cells and are usually malignant. Secondary liver tumors are metastases of malignant neoplasms from other parts of the body, especially the gastrointestinal tract, breast, or bronchus. They usually present as multiple small liver lesions, whereas primary neoplasms usually present as a single large lesion. 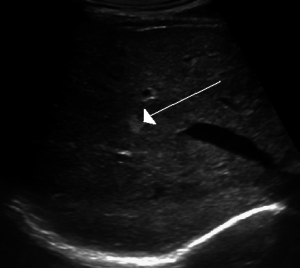 Image: “Hemangioma of the liver as seen on ultrasound” by James Heilman, MD. License: CC BY-SA 3.0

Cavernous hemangiomas are the most common type of benign primary tumor of the liver. They occur within the blood vessels and can often be mistaken for metastatic tumors. These tumors are often asymptomatic and found incidentally during surgery, radiological examination (ultrasound, computed tomography (CT) scan, magnetic resonance imaging (MRI)), or at autopsy. They appear as a red, spongy mass lying below the capsule of the liver.

Needle biopsy should never be done if a hepatic hemangioma is suspected because they have a very high risk of bleeding.

Hepatic adenomas are benign tumors that develop from hepatocytes. These tumors are rare, with an incidence of about 1 in 100,000. They are usually associated with women who take oral contraceptive pills and athletes who abuse anabolic steroids. They generally shrink when these drugs are stopped.

Hepatic adenomas are clinically significant because:

Although there is a relationship between hormonal stimulation and the development of hepatic adenomas, the exact cause is not yet known. However, mutations in some genes involved in transcription factors HNF1 alpha and beta-catenin have been identified in 50% and 15% of hepatic adenomas, respectively.

Patients often present with a mass, sudden onset of right upper quadrant pain, or bleeding due to rupture of the liver capsule.

Although they are benign, these tumors are usually resected due to the risk of malignant transformation.

Focal nodular hyperplasia is not a true neoplasm. It is a hyperplastic mass lesion of the liver and is also associated with the use of oral contraceptive pills. These lesions are frequently solitary, subcapsular, well circumscribed, and rarely larger than 5 cm in size. On cut section, a gray-white central area with fibrous bands radiating to the periphery is seen. These are benign lesions and treatment is not recommended.

Malignant tumors of the liver can be either be primary or secondary. Primary liver tumors are not common in North America and Western Europe but fairly common in other parts of the world. Approximately 20%–40% of liver tumors are primary.

Malignant tumors of the liver can arise from: 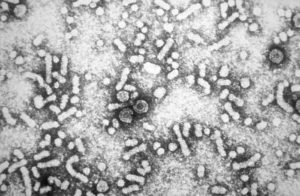 Image: “This electron micrograph reveals the presence of hepatitis-B virus HBV ‘Dane particles,’ or virions. These particles measure 42 nm in their overall diameter, and contain a DNA-based core that is 27 nm in diameter” by CDC. License: Public Domain

HCC is the 5th most common cancer worldwide and the 3rd most frequent cause of cancer deaths. Approximately 82% of cases that occur in developing countries are associated with chronic hepatitis B virus (HBV) infections. The incidence of HCC is higher among males, with a ratio to females of 2.4:1.

The exact cause of HCC is unknown, although several risk factors have been identified. The 4 major risk factors associated with HCC are:

Carriers of HBV are at extremely high risk of developing HCC. In areas where HBV infection is prevalent, 90% of HCC cases are positive for HBV infection. HCC is common in Africa and countries in the Far East, where a greater proportion of the population are hepatitis carriers. This may be due to vertical transmission of the virus from mother to child. The risk of HCC in HCV carriers is higher than in those with HBV.

More than 80% of patients who develop HCC in developed countries (where HBV is not as prevalent) have cirrhosis of the liver.

Aflatoxin is a toxic product of the fungus Aspergillus flavus, which grows on peanuts and grains. Aflatoxins are toxic to liver cells, as they can bind covalently to cellular DNA and cause specific mutations. The chronic ingestion of aflatoxins may be partially responsible for the development of HCC. 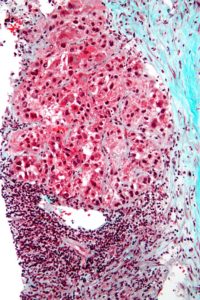 Hepatocellular carcinoma may present as:

All of these forms can result in enlargement of the liver and thus present with symptoms similar to other liver diseases.

Under microscopic examination, this cancer will show abnormal liver cells with varying degrees of differentiation. The well-differentiated cells will look similar to hepatocytes, arranged in cords that are separated by sinusoids. They can also have a green discoloration, which indicates that these cells are so well differentiated that they are capable of producing bile.

The undifferentiated cells will appear as sheets of anaplastic cells. It is often difficult to distinguish a poorly differentiated HCC from a metastatic tumor.

These cancers can metastasize extensively through the hepatic or portal veins to the lymph nodes, bones, and lungs. Metastasis to regional lymph nodes tends to occur early in the lymphatic system. Hematogenous spread to the lung occurs late in the disease.

Occasionally, long, snake-like masses of the tumor spread along the portal vein or the hepatic vein to the inferior vena cava and up to the right atrium.

HCC commonly secretes alpha-fetoprotein (AFP) into the blood. Elevated serum AFP levels are found in over 50% of patients with HCC, making it an important diagnostic test.

Fibrolamellar carcinoma is a variant of HCC and has a better prognosis. It usually does not have an underlying chronic liver cell disease. This tumor occurs in both men and women equally, usually between the ages of 20 and 40 years. It presents as a hard, scirrhous tumor with fibrous bands throughout it. Histologically, it appears as well-differentiated polygonal cells separated by dense collagen bands.

If the above symptoms newly appear in a patient known to have cirrhosis, then HCC should be suspected. 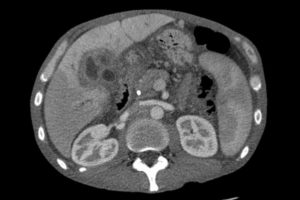 Cholangiocarcinoma is the 2nd most common malignant primary liver tumor. It arises from the bile ducts within and outside of the liver and is not associated with liver cirrhosis.

The risk factors for CCA include primary sclerosing cholangitis, congenital fibropolycystic diseases of the biliary system, and HCV infection.

Extrahepatic CCAs are usually small at the time of diagnosis. They appear as firm, gray nodules within the bile duct wall. Most are adenocarcinomas and may or may not secrete mucin. The presence of mucin in the cytoplasm helps distinguish CCA from HCC.

Intrahepatic CCAs occur in noncirrhotic livers and move down the portal tracts, forming a tree-like tumor within the liver.

Patients with CCA often present in a similar way as those with HCC. However, jaundice is more frequent in those with CCA because of bile duct obstruction. In these patients, surgical resection is rarely possible and the prognosis is poor (mean survival is 6 months from diagnosis).

Metastatic (secondary) tumors of the liver are most common type of hepatic neoplasm. They include cancers of the colon, breast, lung, and pancreas. However, any malignant tumor can metastasize to the liver.

It is very difficult to distinguish between HCC and metastatic liver tumor.

Features that can help differentiate between these 2 types include the following: