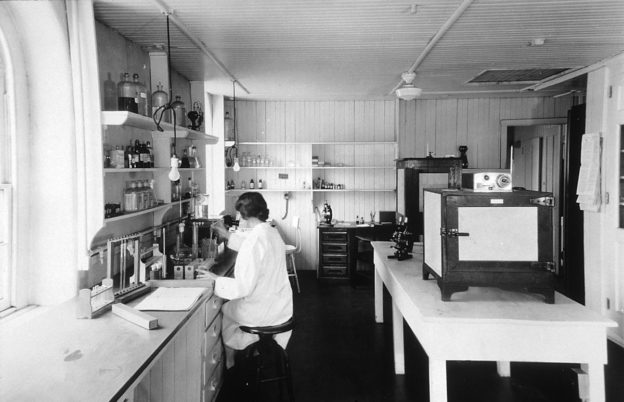 Image: “Immunology laboratory at the Central Cancer Research Labs.” by Unknown photographer – This image was released by the National Cancer Institute, an agency part of the National Institutes of Health, with the ID 1866. License: Public Domain

Cancer immunology is defined as a complex interaction between cells of the immune system with cancerous cells.

Our immune system can identify cancer cells and is capable of getting rid of them until cancer cells develop some strategies to avoid this natural protective mechanism. These strategies include immunoediting and immune checkpoint pathways.

Cancer cells can be classified into two types: the ones that express their unique antigens that can be recognized by immune T-cells, and others that do not express the antigens. Our immune system can only identify the first type of cancer cells and by selectively eliminating them, it allows room for those cancer cells that do not express any identifiable surface antigens to T-cells to grow and proliferate. This process is known as immunoediting. It consists of three sequential phases: elimination, equilibrium, and escape.

Some cancer cells produce molecules that suppress the immune response, and they grow in an environment that is suppressive to T-cells. This process is known as immune checkpoint pathways.

Several receptors have been identified that suppress T-cells against cancer cells. It is thought that cancer cells release possible molecules that stimulate these receptors, for instance, the cytotoxic T-lymphocyte-associated protein 4 (CTLA-4) and the programmed cell death 1 (PD1).

When molecules secreted by the cancer cells attach to these receptors, the cytokine production is blocked and T cell response is suppressed. The cancer cells take advantage of this immune checkpoint pathway as a mechanism to avoid immune cells and hence proliferate excessively.

It was suggested that blocking these receptors on T-cells or engineered T-cells that do not express them will make it possible for the T-cells to escape the immune checkpoints. The therapies using these mechanisms have shown positive results, which are discussed below. Engineered T-cells have been recently used in acute lymphoblastic leukemia.

The first trials with anti-CTLA-4 antibodies were started ten years ago. Patients with melanoma were prescribed anti-CTLA-4 medications, and the results were very encouraging. Tumors’ invasiveness, metastasis, and overall survival improved after the introduction of anti-CTLA-4 treatment. Eventually, the FDA approved ipilimumab. an anti-CTLA-4 antibody, for melanoma.

In 2014, it was found that the PD-1 and the CTLA-4 pathways inhibit cytotoxic T-cells in two different and non-overlapping pathways. Thus, it was suggested to combine anti-PD-1 and anti-CTLA-4 treatments looking for possible synergetic effects. Currently, a phase I clinical trial is testing the efficacy of anti-PD-1 plus anti-CTLA-4 combined therapy versus monotherapy in advanced melanoma, and the preliminary results confirm the presence of a synergetic effect.

Who Will Respond to Immunotherapy Targeting the Immune Checkpoint Pathway?

Unfortunately, a significant number of cancer patients do not respond to anti-CTLA-4 or anti-PD-1 therapy. It was suggested that good responders usually have high expression of the PD-1 legend, which is responsible for inhibiting the cytotoxic T-cells via the PD-1 pathway. Therefore, patients with low PD-1 legend levels are not good candidates for anti-PD-1 therapy.

Patients with tumors that are highly infiltrated by lymphocytes might benefit from adoptive cell transfer techniques. Tumor-infiltrating lymphocytes (TIL) are known to be able to destroy the tumor if they are promptly activated and are in enough numbers.

Adoptive cell transfer helps with the second problem by isolating and expanding TILs and then reinfusing the expanded autologous lymphocytes back to the blood. Immunotherapy by anti-PD-1 and anti-CTLA-4 is responsible for promptly reactivating TILs.

Patients with specific forms of immune cancers, such as B-cell malignancies, including multiple myeloma, are possible candidates for engineered T-cell therapy. Engineered T-cells can express tumor-specific antigen receptors or CAR receptors. They have been used in melanoma, with little success.

Another example is the anaplastic lymphoma kinase antigen, which is shared by anaplastic large cell lung and non-small-cell lung carcinoma, in addition to neuroblastoma. This antigen was also used as a vaccine in secondary prevention of these tumors with good results.

The best results of cancer vaccines can be achieved when combined with other forms of immunotherapy or chemotherapeutics. Unfortunately, primary prevention of cancer by cancer vaccines is yet to be tried in humans, despite several studies in animals.