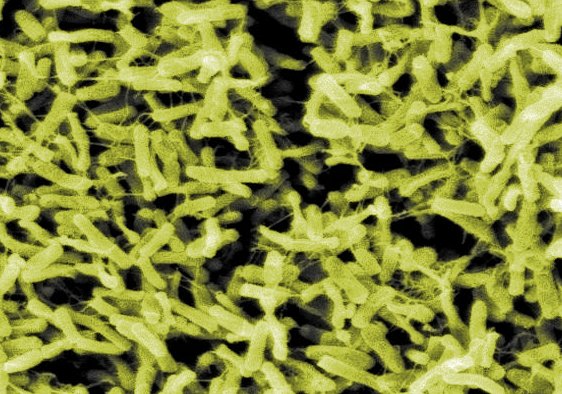 In the United States, there are at least 3 million cases per year of CDI. Patients who have received an antibiotic in the last 3 months and present with diarrhea should be evaluated for possible C. difficile colitis. While the majority of cases are hospital-acquired, up to 40% of C. difficile colitis cases are community acquired.

Although CDI is more common in the elderly, it is also becoming more common among hospitalized children with predisposing conditions such as inflammatory bowel disease.

The recurrence rate of CDI is high, at 40%; this rate can be attributed to metronidazole or vancomycin resistance.

The human colon is colonized by bacterial flora. The use of broad-spectrum antibiotics (such as clindamycin, beta-lactams, and fluoroquinolones) disturbs the normal colonic bacterial flora to varying degrees. While in most patients these changes are not severe enough to cause a problem, in the elderly and patients with preexisting conditions such as inflammatory bowel disease, C. difficile colonization of the colon can occur. Once the colon is colonized with C. difficile, the bacteria can release cytotoxic toxins that cause inflammation and mucosal damage, leading to colitis.

C. difficile forms heat-resistant spores that can survive in the environment for a long time. Outbreaks of C. difficile diarrhea are most prevalent in hospitals and outpatient facilities where there is contamination with spores. Although normal gut flora resists colonization with C. difficile, the use of broad-spectrum antibiotics can alter the normal flora, allowing a proliferation of C. difficile, diarrhea, and toxin synthesis.

C. difficile produces 2 different types of high-molecular-weight toxins that play a crucial role in the pathogenesis of CDI. Toxin A, an enterotoxin, binds to certain receptors in the cellular lining of the intestine. Toxin B, a cytotoxin, has a direct effect on the same cells that result in apoptosis. The ultimate result is mucosal inflammation and necrosis, which causes diarrhea and abdominal pain.

A specific strain of C. difficile, NAP1, is responsible for fulminant colitis, which is associated with leukocytosis, acute renal injury, and toxic megacolon. The judicious use of fluoroquinolone antibiotics may have played a major role in the development and proliferation of the NAP1 strain in the United States. Unfortunately, this form of life-threatening colitis can only be managed by colectomy. Fecal bacteriotherapy and immunotherapy are also appropriate treatment strategies for this strain. 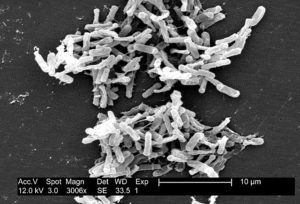 Since the disturbance of normal colonic flora and colonization of C. difficile is central to the pathogenesis of CDI, the use of broad-spectrum antibiotics and the presence of certain medical conditions increase the likelihood of this disease.

The use of broad-spectrum antibiotics is the most commonly implicated etiology in C. difficile colitis. Cephalosporins, penicillins, and clindamycin have all been associated with CDI, and the recent expanding use of fluoroquinolones is thought to be responsible for the emergence of the NAP1 strain that is implicated in fulminant colitis.

Proton pump inhibitors, when used in older patients who are also receiving antibiotics, put patients at even higher risk of developing CDI.

An increased risk of CDI in adults has also been associated with taking the antidepressants mirtazapine and fluoxetine.

Genome studies have found an association between a common polymorphism in the upstream promoter of the interleukin (IL)-8 gene and an increased risk for both the initial occurrence and recurrence of CDI. Neutrophil recruitment to the intestine is thought to be coordinated by IL-8, and the polymorphism in the IL-8 promoter is thought to influence the manner in which neutrophils are recruited to the intestines when CDI is present.

Rare associations include the following:

Patients usually complain of diarrhea, which is often watery but may also be bloody. Abdominal pain, fever, and malaise are common; vomiting is less common. These symptoms are nonspecific and a high degree of suspicion is needed to diagnose CDI, especially if there is a known history of recent antibiotics exposure or hospitalization.

In mild cases, a physical examination may be normal or may only reveal fever and diffuse abdominal tenderness. In more severe cases, tenderness and rebound tenderness become more pronounced. Patients with severe dehydration, abdominal distension, decreased bowel sounds, and, sometimes, rigidity may have either fulminant C. difficile colitis or pseudomembranous colitis.

The presence of 3 or more of the following factors indicates moderate-to-severe CDI:

Laboratory investigations in C. difficile infection are helpful. Complete blood counts can indicate leukocytosis. Kidney function and electrolytes should be checked, as severe CDI can cause dehydration and kidney injury.

Stool analysis is recommended in symptomatic patients with diarrhea. Fecal leukocytes are common, at 50% of patients. The gold standard to diagnose C. difficile is stool culture, but this examination is time-consuming, and enzyme immunoassay testing for toxins A and B in the stool is recommended in order to not delay treatment. 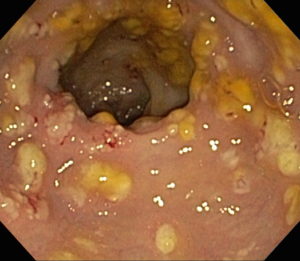 In patients with more severe disease, and especially if pseudomembranous colitis is suspected, an abdominal computed tomography (CT) scan is indicated to check for the presence of colonic wall thickening; it may also reveal other intra-abdominal pathologies such as an abscess, colonic perforation, and/or fluid accumulation in the abdominal cavity.

Colonoscopy can also be used but is not needed to make a diagnosis of C. difficile. If a colonoscopy is performed, the yellowish plaques overlying the inflamed mucosa, the pseudomembranes, may be visualized (see figure). This is not a true membrane, however, as it contains mucin, fibrin, necrotic cells, and neutrophils, but not viable epithelium.

Fulminant colitis is a rare form of CDI, occurring in few patients but accounting for the most serious complications, including toxic megacolon, colonic perforation, and death. Colectomy is usually required in patients who develop fulminant colitis.

Toxic megacolon is an acute toxic colitis with dilatation of the colon. This condition is diagnosed clinically with signs and symptoms of severe toxicity, the presence of a tender abdomen, and a dilated colon on a plain radiograph of the abdomen.

Because CDI has various presentations depending on the degree of severity, a number of guidelines have been proposed for its treatment.

First, and as a rule of thumb, broad-spectrum antibiotics causing the CDI should be stopped. Asymptomatic carriers should not be treated or tested. Patients with symptomatic CDI should receive antibiotic treatment; suitable treatment options include metronidazole, oral vancomycin, or fidaxomicin. Additional measures include fluid and electrolyte replacement, avoidance of antimotility agents, limiting the use of proton-pump inhibitors, hand hygiene, and standard contact precautions (wearing gowns and gloves).

The Centers for Disease Control and Prevention has also created some guidelines to prevent CDI in hospitalized patients: