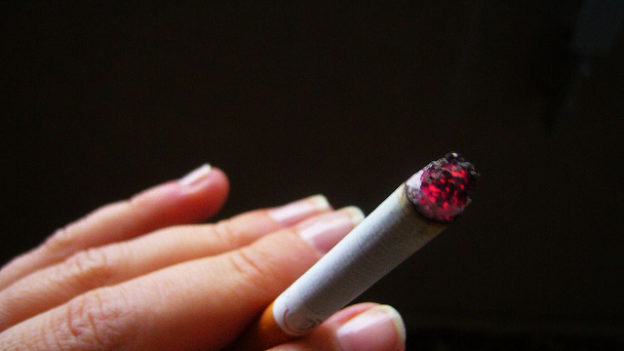 In 1908, a unique disease was described by Buerger. A detailed analysis based on his pathological conclusions is still used today. Buerger’s disease is a chronic disease caused by thrombosis, i.e., severe inflammation and blood clotting, especially in the veins and arteries. The bodily parts most affected by this painful disease are the hands and feet.

Buerger’s disease is also known as thromboangiitis obliterans. It is a very unusual disease that interrupts blood circulation along specific arteries or veins of the legs and arms.

It is common for Buerger’s disease patients to smoke cigarettes or other types of tobacco.

Buerger’s disease as inflammation of the blood vessels 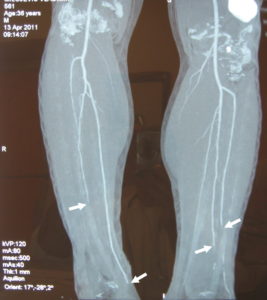 Buerger’s disease is persistent. It is characterized by fragmental inflammation and thrombosis, which causes severe damage of small- to medium-sized arteries and veins, eventually affecting the peripheral structure of the lower and upper limbs.

Blood clotting inflames the patient’s blood vessels, causing swelling and blockage in the vascular structure of the body. Thrombi (blood clots) ultimately cause destruction and damage to the skin tissues, leading to infectious gangrene, which starts from the tips of the toes and eventually spreads to the legs and arms.

Buerger’s disease is thought to be autoimmune in nature. The attributed cause is undefined, but the consumption of tobacco is the main culprit. The pathophysiological factors thought to be responsible are platelets, leukocytes, endothelial cells, and sensory neurons. The disease is caused by inflammation and swelling of small blood vessels. 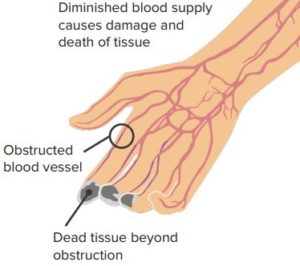 Although thromboangiitis obliterans is considered to be idiopathic, some causes may stem from genetic alterations.

Inflammatory endarteritis is a severe state of thromboangiitis obliterans. It causes vasculopathy inflammation, in which a prothrombotic state is generated that eventually leads to a vaso-occlusive state. Initiation of the inflammation process occurs within the tunica intima. This condition is closely linked with heavy tobacco use, and its permanence leads to expansion of the peripheral blood vessel structures.

The chief pathophysiology of these Buerger’s disease symptoms appears when vessels become inflamed and form clots. This may result in obstructed blood flow throughout the tissues of the body, leading to the death of tissues due to lack of oxygen and nutrients. Ultimately, this produces vasculitis as well as ischemic changes in the extremities.

Buerger’s disease affects people who smoke 1–2 packs of cigarettes daily and who are hypersensitive to tobacco extracts when injected under the skin. As well, they have an amplified cellular predilection toward peripheral endothelium-dependent vasorelaxation and collagen types I and III. Patients also display a complex frequency of leukocyte antigen (HLA)–A9, HLA-B5, and HLA-A54, thus signifying a genetic element to the disease.

Buerger’s disease commonly initiates with lethargy and pain in the affected areas. Symptoms may include:

Further signs and symptoms may appear as a result of decreased blood supply:

If a patient experiences any signs and symptoms of Buerger’s disease it is essential to seek medical attention. It should not be assumed that these signs are merely due to the aging process.

Investigations and Diagnosis of Buerger’s Disease

The majority of patients affected with Buerger’s disease are between the ages of 20 and 45. This ailment rarely affects either elderly or pediatric patients. Men are three times more likely to have Buerger’s disease than women. However, with the increasing number of female smokers, the disease rate in women is assumed to rise.

Because the signs and symptoms of this disease may resemble those of many other diseases, a detailed assessment by a physician is required to make a definitive diagnosis. There is no clear test to assess if a patient is suffering from arterial disease, but there are certain tests a physician can carry out to exclude other diseases, including a simple blood sample test.

An additional assessment that a physician may use is the Allen test. This is a test in which the patient is asked to tighten their fist while pressure is applied to an artery of the hand. When the fist is opened, the physician will release the increased pressure from the artery and the hand should look paler than before it was tightened. If the paleness disperses very slowly, this may be a sign of Buerger’s disease.

Physicians should look for five key signs when making a diagnosis of Buerger’s disease:

An analysis based on certain criteria is recommended:

There is no recommended route of investigation, but the following tests should be used to diagnose the root cause. 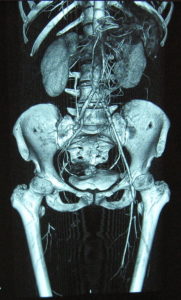 This is considered the most common test for arterial blockage along with X-rays, which are taken after the inoculation of dyes.

Some angiographic characteristics are typical of Buerger’s disease (though not pathognomonic), including “corkscrew” arteries resulting from vascular damage, mainly the arteries in the ankles and wrists. Angiograms can also highlight stenoses or occlusions in different areas of both the legs and arms. Sometimes it may be necessary to conduct angiograms on other parts of the patient’s body, such as a mesenteric angiogram, to exclude other types of vasculitis that include vascular areas commonly affected in Buerger’s disease.

This test can be used to exclude Buerger’s disease and other reasons for secondary Raynaud’s color.

This test can eliminate the source of recurring emboli.

Due to the risk of cancerous elements, sometimes a biopsy in non-healing areas is required. Skin biopsies are very rarely performed, however.

There is no satisfying treatment for Buerger’s disease yet. However, the signs and symptoms of this disease can be controlled and treated by increasing blood circulation, quitting smoking, moving to a warmer climate, and, in certain situations, performing surgery on affected nerves. The nerves are surgically severed to stop the pain via a procedure called sympathectomy. Circulation is increased by taking an adequate amount of liquids and getting regular exercise.

Vascular surgery is a process in which a bypass of the blocked vein is implanted. A vein is taken from a different part of the patient’s body or an artificial grafting is used, which is then connected to the affected vein, thus allowing the blood to bypass the constricted area.

Patients should avoid smoking and should also stay away from secondhand smoke.

Buerger L. Landmark publication from the American Journal of the Medical Sciences, ‘Thrombo-angiitis obliterans: a study of the vascular lesions leading to presenile spontaneous gangrene’. 1908. Am J Med Sci 2009; 337:274.