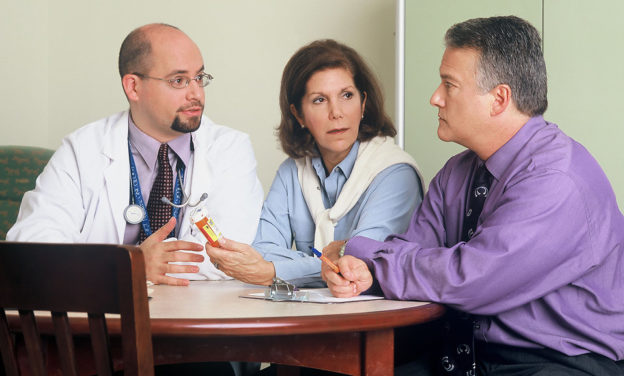 Anatomy of the Spinal Cord 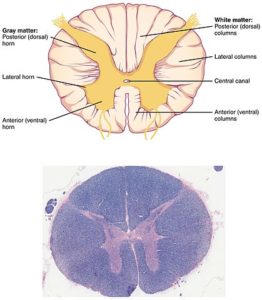 The spinal cord consists of ‘H’-shaped grey matter surrounded by white matter. The central canal contains cerebrospinal fluid, which runs in the center of the H.

The organization from medial to lateral is sacral to cervical fibers. Ascending tract

Position sense, vibration sense and fine touch from ipsilateral side to the gracilis and cuneate nucleus in the medulla. They cross in medulla as internal arcuate fibers and proceed to the contralateral somatosensory cortex via the thalamus.

The organization from medial to lateral is cervical to sacral fibers. Descending tract

Lateral corticospinal tract: crosses in the pyramid in the medulla

The organization from medial to lateral is cervical to sacral fibers. Ascending tract

Anterior spinothalamic axons cross in the anterior white commissure to form the contralateral lateral spinothalamic tract after ascending ipsilaterally for about 2 levels.

Provide unconscious proprioception information to the cerebellum Vestibulospinal, rubrospinal and tectospinal tracts These form the extrapyramidal system mainly for control of antigravity muscles.

Blood supply of the spinal cord

The branches of the same anastomose extensively form the vasa corona. This is reinforced by medullary branches of the lateral branch of intercostal arteries at the corresponding levels.

The largest medullary branch is the artery of Adamkiewicz. Also known as arteria radicularis magna, it typically arises from a left posterior intercostal artery at the level of the 9th to 12th intercostal artery, which branches out from the aorta. It supplies the lower two-thirds of the spinal cord via the anterior spinal artery.

The ASA supplies the anterior two-thirds of the spinal cord. Traumatic injury, occlusive thrombosis of the ASA secondary to infection, or embolus lead to anterior cord syndrome. This mainly involves the corticospinal tracts and the spinothalamic tracts bilaterally.

Occlusion of the PSA leads to posterior cord syndrome. The dorsal column is predominantly involved.

Injury to the artery of Adamkiewicz, especially during surgical procedures such as abdominal aortic aneurysm repair and neurosurgery, can lead to postoperative paralysis and neurological deficits. 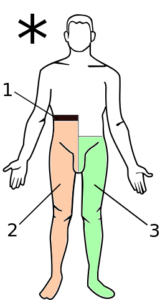 The physiologist Charles-Édouard Brown-Séquard first described this condition in 1850. It involves damage to one side of the spinal cord, resulting in ipsilateral loss of motor function and posterior column sensations and contralateral spinothalamic involvement 1 to 2 levels below the level of cord damage.

Cord involvement can be summarized as follows:

Brown-Séquard syndrome is classically seen in cases of traumatic spinal cord injury and in intradural extramedullary tumors such as neurofibromas and schwannomas, which cause cord compression from one side. Less frequent causes include infections such as tuberculosis and ischemic occlusive diseases of the spinal cord.

Magnetic resonance imaging is the imaging of choice in spinal cord lesions.

Treatment depends on the inciting factor. The use of steroids to decrease cord edema and inflammation is controversial in spinal cord injury. 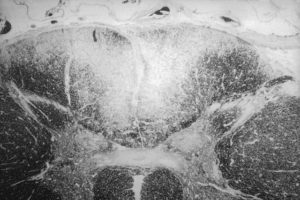 Also known as syphilitic myelopathy, tabes dorsalis is a culmination of slow degeneration and demyelination of dorsal column nerves. The disease is rarely seen today, although it was quite prevalent when neurosyphilis was commonly left untreated for a long time. It was seen in men more than women, typically in mid-life.

Coinfection with HIV can potentially lead to a resurgence of this condition. A sexually transmitted disease in nature, it is caused by the spirochete bacterium Treponema pallidum.

Spinal cord involvement can be summarized as follows:

Some of the other classically described but now rare related conditions include:

T. palladium is very sensitive to penicillins. However, the neurological deficit, once set in, is rarely completely reversible. Physiotherapy for paralysis and pain management with the help of opiates are important treatment adjuncts.

Prophylactic treatment for those who come inadvertently into sexual contact with syphilitic patients is indicated.

Tabes dorsalis can progress to blindness, paralysis, and dementia if not appropriately controlled.