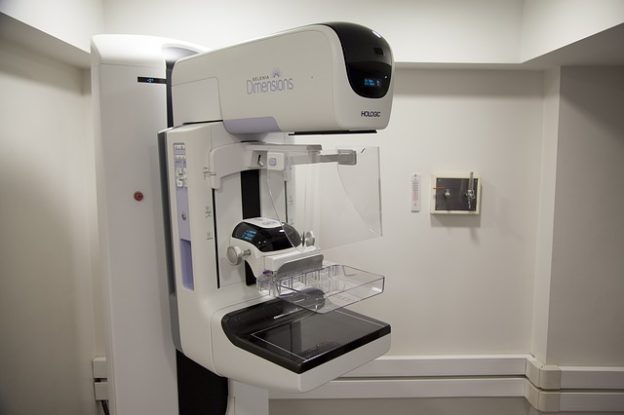 Therefore, women with a documented family history of a genetic abnormality associated breast or reproductive system cancers should be screened for these specific genes. If the woman is found to be positive for one of the previously mentioned genes, she should receive breast cancer imaging screening at a considerably younger age compared to women who do not have such genetic abnormalities.

Other risk factors for breast cancer include radiation exposure, obesity, alcohol use and advanced age > 40 years.

Randomized clinical trials showed a clear benefit from breast cancer screening in lowering cancer-related mortality and morbidity. The most studied imaging modalities are:

Note: Ultrasound is used as an adjunct to mammography for focal areas of concern and focal mammographic abnormalities. It is not commonly used alone due to the high false-positive rate of ultrasound.

Localizing breast lesions by an o´clock position. Image by Lecturio.

Breast masses are almost always biopsied using image-guided needle biopsy. Breast imaging and breast image-guided biopsies allow for a full evaluation prior to surgery. If the type and extent of disease are known, then usually only one surgery is needed. Prior to breast needle biopsies, a surgical biopsy was performed to diagnose the problem and then another surgery was performed to fully remove the lesion.

Types of breast biopsies are:

A biopsy is performed using the method that the lesion is seen best on. Ultrasound-guided biopsies are most common as masses are best seen on ultrasound. 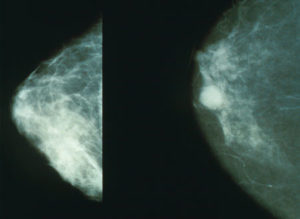 The main question regarding mammography screening in high-risk women for breast cancer is whether the age to start screening should be lowered. A recent study has shown that women who are considered as high risk for breast cancer who received annual mammography after 30 years of age and up to 39 years of age had a cancer detection rate of 3.4 per 1000. Surprisingly, the cancer detection rate by mammography in high-risk women aged between 40 and 49 years is around 3.3 per 1000.

Based on this, one can clearly deduce that commencing routine annual mammography screening at the age of 30 years, 10 years younger than your typical screened woman, is certainly beneficial to the patient.

The issue of using mammography in women younger than 40 years of age is the reduced sensitivity and specificity due to the presence of a denser breast in young women. Therefore, many women who get a mammogram before the age of 40 years (up to 8.6 %) will need a second assessment exam (recall rate).

Mammography is superior to magnetic resonance imaging in the detection of early precancerous regions, such as intraductal carcinoma in situ, which is characterized by small microcalcifications on mammography.

Finally, women with BRCA mutations should receive mammography routine screening starting at the age of 25 years. If the quality of the mammograms is very low due to the very dense breast at that age, one can:

Ideally, women should be screened every year beginning at the age of 40 and continuing as long as they have a life expectancy of 10 years or more. 7 large randomized controlled trials have shown a 30 % decrease in deaths from breast cancer due to screening mammography. However, this is not done in many parts of the world due to the expense of annual screening.

Note: Standard screening mammogram (4 views) will emit the same amount of radiation that you normally receive in three months of exposure to your surroundings or one transatlantic flight.

For a woman presenting clinical evidence of breast disease, palpable mass or other symptoms, or an abnormality seen on screening mammogram, additional tailored images are obtained to further evaluate the area of concern. Abnormalities that lead to concern include:

Given on all mammograms:

Note: Dense breast tissues decrease the sensitivity of mammography and are thought to have at least a slightly increased risk of developing breast cancer.

Birads categories are final assessment categories and assigned to every mammography report.

In contrast to a mammography, the utility and benefits of magnetic resonance imaging studies, such as screening tools for breast cancer in high-risk women, are based on low-evidence research such as:

Randomized clinical trials were not performed to assess the efficacy of magnetic resonance imaging in screening for breast cancer in healthy or high-risk women.

Image: “Axial T2W image (A) demonstrates a post-lumpectomy seroma cavity (arrow) in this patient with positive margins after conservation therapy for breast cancer. The axial DCE-MRI subtracted image demonstrates minimal thick, nodular enhancement in the posteromedial and lateral walls of the lumpectomy cavity (arrows). In this patient, re-excision of the cavity with attention to the areas noted on the DCE-MRI yielded negative margins ” by Ojeda-Fournier H, Comstock CE – Indian J Radiol Imaging (2009 Apr-Jun). License: CC BY 2.0

This result is based on seven huge observational studies from the Netherlands, Canada, the United Kingdom, Germany, Italy, Norway, and Austria. Despite the clear added benefit of magnetic resonance imaging in the detection of breast cancer, no sophisticated randomized clinical trials have been carried out so far. 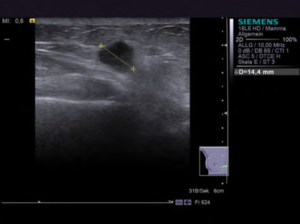 As with magnetic resonance imaging, ultrasonography was only evaluated in observational studies as a tool to screen for breast cancer. Women with an intermediate risk for breast cancer, i.e., a second degree relative with previous breast surgery for an unknown cause might benefit from early screening with ultrasonography instead of mammography or magnetic resonance imaging for two main reasons:

Very young women who are at high-risk for breast cancer should receive ultrasonography in addition to mammography and magnetic resonance imaging. The goal is to combine the results of the different imaging modalities to make it possible to detect as many cancers as possible before cancer becomes invasive. The added benefits of ultrasonography are based on cross-sectional and observational studies.

Other Imaging Modalities for Screening for Breast Cancer

Patients who document a previous history of breast cancer might benefit from a positron emission tomography scan to screen for ipsilateral recurrent disease or contralateral breast cancer microscopic depositions.

High resolution computed tomography scans of the breast are also becoming a promising technique for the detection of early breast cancer in younger women whose magnetic resonance imaging studies and mammograms were not conclusive. Contrast-enhanced magnetic resonance imaging studies, or contrast-enhanced computed tomography scans, are helpful in the differentiation between malignant and benign breast lesions.