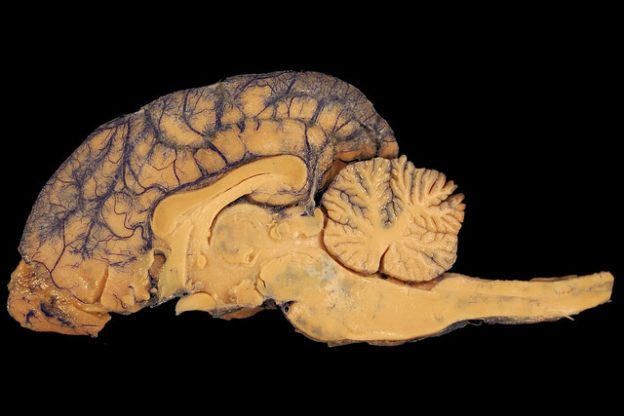 Anatomy of the Brainstem 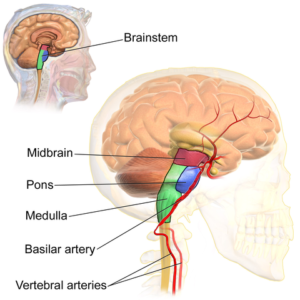 The brainstem is an indispensable interface between the cerebrum and the cerebellum. It continues as the spinal cord at the cervicomedullary junction after passing through the foramen magnum. The brainstem comprises three components: mesencephalon (midbrain), pons, and medulla oblongata. Sometimes, the diencephalon, which is the caudal part of the forebrain is also included.

The function of the brainstem is to control the flow of messages between the brain and the rest of the body. The brainstem also regulates the fundamental functions of life such as breathing, heartbeat, blood pressure, control of consciousness, and whether one is awake or sleepy.

It contains both gray matter and white matter. The gray matter is organized into cranial nerve nuclei, the reticular formation and pontine nuclei, while the white matter consists of fiber tracts (axons) mediating information to and fro between the cerebral cortex, cerebellum, spinal cord, cranial nerves and the peripheral nerves.

Along its entire length, the internal structure of brainstem is organized in three laminae: tectum, tegmentum, and the basis.

The tectum consists of the quadrigeminal plate and the medullary velum responsible for auditory and visual reflexes.

The cranial nerve nuclei are somatotopically organized in the middle layer, that is known as tegmentum. They are arranged from medial to lateral as somatic motor, visceral motor, visceral sensory and somatic sensory. It is involved in many unconscious homeostatic and reflexive pathways.

The motor pathways travel in the basis, the most anterior part. 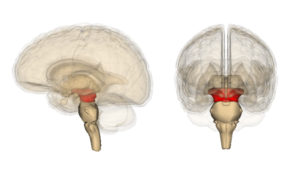 The midbrain (mesencephalon) connects the diencephalon to the pons.

The important components of the midbrain are:

It conveys dentato-rubro-thalamic fibers to the thalamus from the cerebellum. The rubrospinal tract, part of the extra-pyramidal motor system, originates at the red nucleus.

Contains the corticospinal tracts as they pass through the cerebral peduncles.

It conveys dopaminergic fibers to the basal ganglia. Dopamine is produced here. Loss of nigro-striatal facilitation leads to Parkinson’s disease.

The cerebral aqueduct (aqueduct of Sylvius)

The aqueduct marks the transition from the 3rd ventricle to the 4th ventricle. Aqueductal stenosis is a common cause of congenital obstructive hydrocephalus.

Part of the reticular formation, it helps maintain the consciousness of an individual. 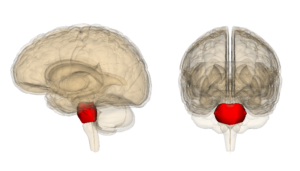 Pons (“bridge” in Latin) connects the midbrain above to the medulla oblongata below. The important features of pons are as follows: 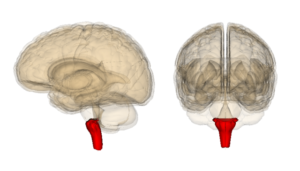 The medulla connects the brainstem with the spinal cord, with the transition occurring at the level of the foramen magnum. The important features of the medulla are as follows:

The reticular formation is a set of interconnected nuclei, found in the brainstem.

Anterior View of the Brainstem

The important structures seen on the anterior aspect of the brainstem are as follows:

All cranial nerves take origin from the ventral aspect of the brainstem, except the IV cranial nerve which arises dorsally.

Posterior View of the Brainstem

The salient anatomical substrates of the posterior surface are:

The brainstem is the major relay station for critical sensory, motor, and autonomic information. It plays an important role in the control of cardiac and respiratory function, consciousness and the sleep cycle.