Bradycardia is a slower than normal heart rate given a child’s age. Guidelines for bradycardia include the following:

Tachycardia is a faster than normal heart rate for the child’s age. Average heart rates include the following:

Bradycardia can be caused by metabolic acidosis or from taking certain drugs. The most common condition, sinus bradycardia, occurs because the sinus node fires at a slow rate.

Epidemiology of Cardiac Arrhythmia in Children

Cardiac arrhythmias affect about 55 out of every 100,000 children that present to the emergency department. The most common form of cardiac arrhythmia in children is sinus tachycardia. Bradycardia and the group of disorders known as supraventricular tachycardia are reasonably common. Atrial fibrillation is rare in children.

Etiology and Pathophysiology of Cardiac Arrhythmia in Children

Sinus tachycardia can be caused by dehydration or by any febrile illness. It is also related to respiratory distress. 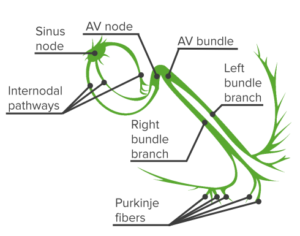 Sinus bradycardia is most commonly caused by hypoxemia. Respiratory failure, inadequate oxygenation of the blood due to congenital heart or lung disease, and hypothermia are commonly associated with a depressed sinus node and sinus bradycardia.

Patients with increased intracranial pressure due to tumors or other obstructive lesions can present with hypertension and bradycardia, a sign of impending brain tonsillar herniation.

Complete heart block in children can stem from an isolated disease or it can be a complication of structural heart disorders. A common cause of complete AV block is cardiac surgery; specifically, using catheter-alcohol ablation of the left ventricular wall to treat hypertrophic cardiomyopathy. Maternal history of systemic lupus erythematosus or scleroderma has also been linked to an increased risk of complete heart block in the offspring. Hypothyroidism should be excluded in any child presenting with bradycardia due to AV block.

Patients who have an ongoing infection or a febrile illness may present with sinus tachycardia. Such patients will complain of palpitations, shortness of breath, and other symptoms specific to the infection site. Chest pain can be related to myocarditis and can be associated with ventricular arrhythmia.

Infective endocarditis and viral myocarditis are commonly associated with ventricular arrhythmia and occasionally bradycardia. Electrolyte disturbances such as hypocalcemia or hyperkalemia can also cause bradycardia.

Patients who have atrial fibrillation may present with symptoms and signs suggestive of embolic disease, such as ischemic stroke.

The first step when evaluating a child that presents with palpitations is to perform an electrocardiogram. The electrocardiogram can help the treating physician identify the type of arrhythmia and the seriousness of the condition.

Because of the association between myocyte damage and ventricular arrhythmia, physicians should check troponin levels in children presenting with suspected myositis, as elevated troponin levels may indicate some degree of heart damage. A complete blood count is also advised to rule out anemia which is a common cause of sinus tachycardia; leukocytosis, which is suggestive of an ongoing infection; and elevated erythrocyte sedimentation rate, which is linked to myocarditis or endocarditis.

Patients with a complete heart block should be tested for possible Lyme disease. They should also undergo a throat swab test and an anti-streptolysin O test to check for strep throat and rheumatic fever.

Patients should undergo echocardiography when myocarditis or endocarditis is suspected. Serum electrolytes should also be checked; hypocalcemia has been linked with ventricular arrhythmia and complete heart block, whereas hyper- and hypokalemia are associated with an increased risk of ventricular ectopic beats and ventricular tachycardia.

Thyroid function tests are indicated to exclude hypothyroidism, a common cause of bradycardia in children. Arterial blood gasses should also be assessed, as acidosis and hypoxemia have both been linked with bradycardia.

Patients who complain of palpitations but have a normal electrocardiogram may need Holter monitoring. A wearable Holter monitor tracks heart rhythm over a period of one or two days. Understanding heart rhythm makes it possible to identify the type of arrhythmia.

Treatment of Cardiac Arrhythmia in Children

Children with asymptomatic bradycardia should be monitored closely. When the cause of bradycardia is obvious, such as acidosis, hypothyroidism or electrolyte imbalance, correction of the cause may treat bradycardia. Symptomatic children should be treated with atropine or isoproterenol. These drugs should only be used in children with a complete heart block until a permanent pacemaker is implanted.

Patients with recurrent ventricular tachycardia and hypertrophic cardiomyopathy may be candidates for an implantable cardioverter-defibrillator. These devices are linked to a decreased risk of sudden cardiac death.

Children who have sinus tachycardia due to dehydration or febrile illness usually respond well to treatment of the etiology. For instance, the use of adequate analgesia and antibiotic therapy for an infectious etiology is known to bring down the fever in the child, which in turn may correct the sinus tachycardia.

Patients who have frequent atrial arrhythmia or supraventricular tachycardia should be evaluated for possible automaticity of the atria and myocardium. Ablation of the automatic focus may be curative in some patients. Beta-blockers and calcium channel blockers can also be used in the treatment of supraventricular tachycardia, but care must be taken to exclude Wolf-Parkinson-White syndrome before the administration of calcium channel blockers such as verapamil which has a selective effect on the AV node.

By slowing conduction at the AV node in patients with an accessory atrioventricular pathway, conductance is usually improved in the accessory pathway. This can explain the increased risk of ventricular arrhythmias after the use of calcium channel blockers in patients with atrial fibrillation and Wolf-Parkinson-White syndrome.

Finally, patients with atrial fibrillation should receive digoxin, diuretics, beta-blockers, or calcium channel blockers. Anticoagulation therapy may be needed to prevent the formation of intramural thrombi within the atria.