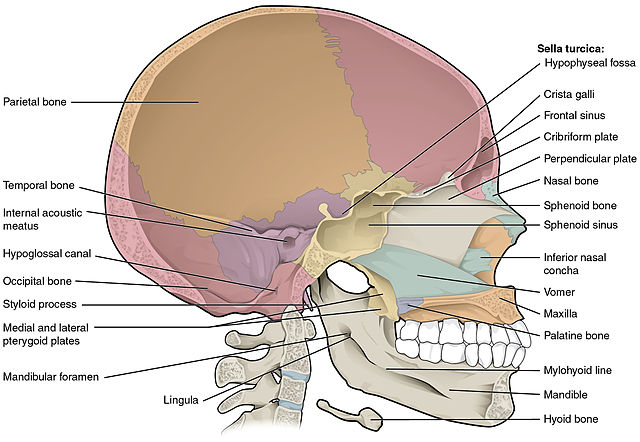 Development and Growth of the Skull

The following facts are fundamental to understanding the development of the skull:

The development of the cranium is closely related to that of the brain and meninges. Regarding the enclosure of the brain, a mesenchyme compression, the primitive meninx, is apparent in the head region in the 5th and 6th weeks and is divided into inner (endo meninx) and outer (ecto meninx) layers. The endo meninx then differentiates itself into the pia mater and arachnoid mater and the ecto meninx into the dura mater of the cranium. Predominantly, the skull base develops from enchondral ossification whereas the skullcap develops from intramembranous ossification.

The neurocranium and viscerocranium can be distinguished in the skull. The neurocranium encases the brain and consists of the cranial base and cranial vault. In the neurocranium region, the ethmoid bone forms the cartilaginous base, the parietal and frontal bones form the connective tissue base, and the occipital, temporal, and sphenoid bones form the mixed base (chondral and membranous).

Apart from serving as a part of the face, the viscerocranium serves as the base of the skull and as an opening to the digestive and respiratory tracts. In the viscerocranium region, the hyoid bone, inferior nasal concha, and malleus are formed on the cartilaginous base. The maxilla, nasal bone, lacrimal bone, zygomatic bone, etc. are formed on the connective tissue base.

As already mentioned, the bones of the cranial vault are purely membranous. A fixed boundary does not exist between the skullcap and cranial base. Nevertheless, the frontal bone, occipital bone, and both parietal bones are considered as part of the skullcap, and these bones are involved in the formation of the skull.

When 2 adjacent bones abut against each other, the connective tissue forms sutures. The most significant sutures are: 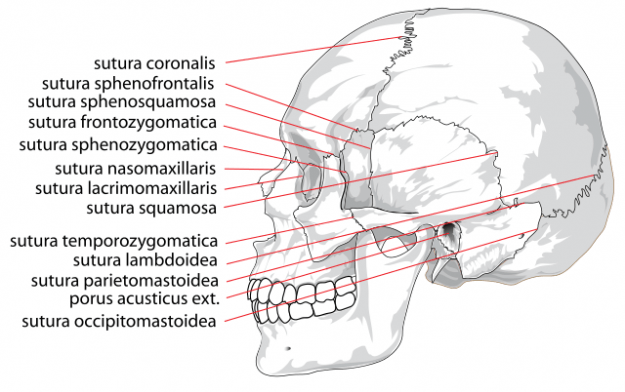 At places where several bones meet, major gaps are covered by connective tissue membranes. These are called fontanelles. For toddlers, these fontanelles remain open for some time before they close. There are 4 large fontanelles:

The skull bones can move at birth because of the sutures and fontanelles, in order to adapt to the size of the birth canal. In addition, the fontanelles are a basic requirement so that the infant skull can keep up with the rapid growth of the brain after birth.

Normal synostosis of the sutural bones (sutures) occurs once in adulthood. Craniosynostosis is a form of pathologic, premature synostosis seen in infants.

The skull bones, which are also called the cranial bones, form the cranial cavity, which encloses and protects the brain. These 8 bones include: 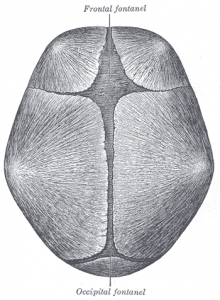 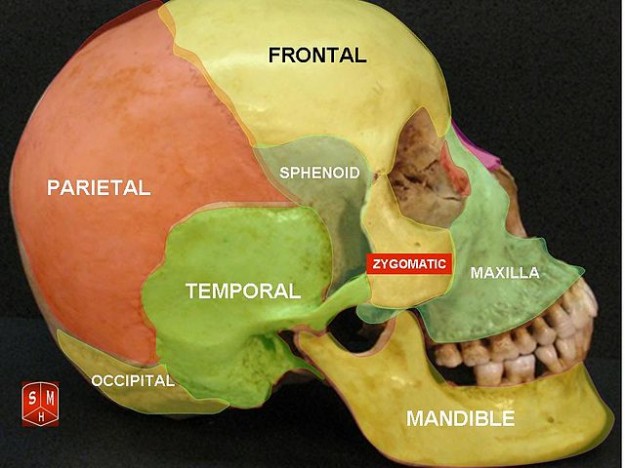 The frontal bone forms the forehead, orbital roof, and most of the anterior cranial base. The two frontal bones are joined together shortly after birth and the cranial suture (metopic suture) disappears between the 6th and 8th year.

The forehead is formed on the front surface of the skull by the squama frontalis, which is a scale-like bone plate. From the coronal suture, it bends down from the cranial vault and makes a bend in the vertical direction. The frontal bone thickens above the orbits to the supraorbital margin, which includes a small opening, the supraorbital foramen medial to its center. The supraorbital nerve runs along this margin.

A large part of the sides of the skull, and the cranial vault, form the 2 parietal bones.

The parietal bones have special features located on the inner surfaces, which have many protrusions and notches for the blood vessels of the dura mater and superficial meninges of the dense connective tissue.

A special portion of the temporal bone is the mastoid part, which is located posterior and inferior to the external auditory canal. It contains some cavities filled with air and lined with mucous membrane and is separated from the brain by extremely thin bone walls. In inflammation, infection can spread directly to the brain.

The mastoid process is located behind the external auditory canal, and it is the place of attachment for some neck muscles. 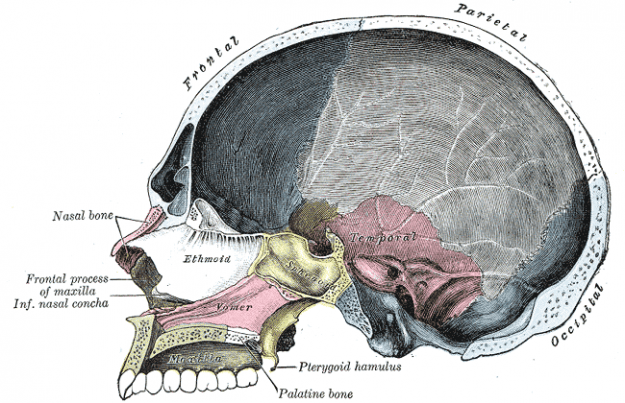 The occipital bone forms the main part of the base and the back of the skull.

The small palpable elevation on the back of the head, above the neck, is called the external protuberance. From there, two curved projections extend laterally and serve as attachments for different muscles.

The shape of the sphenoid bone resembles that of a bat with outstretched wings. It is located in the center of the skull base. The sphenoid bone is connected to other cranial bones and holds them together. It lies posteriorly and slightly superior to the nasal cavity and forms a part of the base, the sidewalls, and the rear wall of the orbit.

The sella turcica (‘Turkish saddle’) rises up as a bony saddle-shaped structure on the superior surface of the sphenoid body. The hypophysis (pituitary gland) is located in the front part of the sella turcica, which fulfills a significant hormonal function. 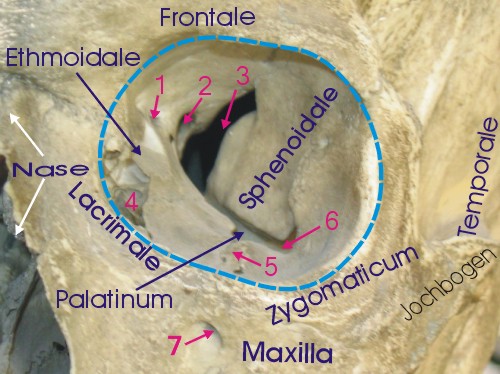 The ethmoid bone is located in the midline in the front part of the skull base medial to the orbit in front of the sphenoid and behind the nasal bone. It is characterized by a sponge-like structure.

The ethmoid bone is a supporting structure of the nasal cavity and supports it from the top.

A special component of the ethmoid are the nasal conchae. These nasal turbinates increase the surface area of the nasal mucosa and increase the effectiveness of the sense of smell, by heating, filtering, and moistening the inhaled air, before it flows into the oral cavity.

During the first 2 years of life, the shape of the face markedly changes, the bones of the skull and face expand, the first teeth are formed and erupt, and the sinuses increase in size.

Growth ends around the age of 16 years.

The following 14 bones belong to the facial skeleton:

The nasal bone is referred to as the roof of the nasal cavity and is connected to the frontal process of the maxilla and nasal pars of the frontal bone.

The rest of the nasal supporting tissue consists of cartilage.

An opening in the maxilla is located below the orbit which is called the infraorbital foramen. This foramen is crucial for the passage of the infraorbital nerve, blood vessels, and maxillary branch of the trigeminal nerve.

At birth, the fusion of the upper jaw bone is completed. If the fusion does not take place, it results in a cleft palate or cleft lip. In the case of a cleft lip, there is a gap in the upper lip, which can lead to speech and swallowing difficulties, as well as middle ear inflammations. 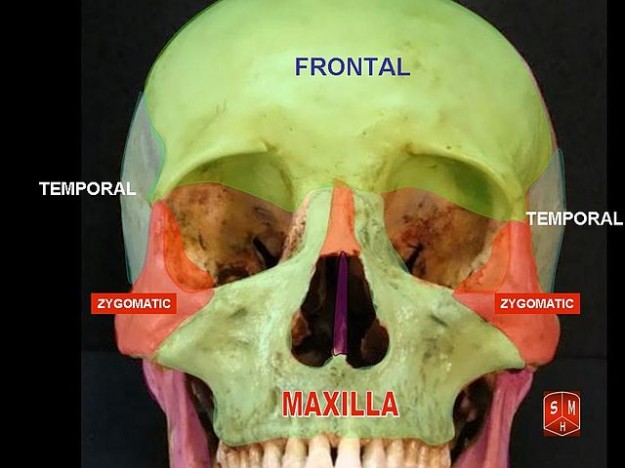 The 2 zygomatic bones are also called the cheekbones. They form the cheek contours and a part of the sidewalls and floor of the orbit. They are connected to the frontal bone, maxilla, sphenoid bone, and temporal bone.

The mandible consists of a mandibular body (lower jaw body) as well as 2 ascending structures (mandibular rami). Each ramus has a condylar process at its rear end, which is connected to the mandibular fossa and articular tubercle of the temporal bone. This branch is called the temporomandibular joint (TMJ).

The mental foramen (mentum = chin) lies approximately below the 2nd premolar, and the mental nerve runs along this region. Anesthetics are often injected in the nerve in case of painful dental procedures.

The paired lacrimal bones are similar to a fingernail in size and shape, are very thin bones, and are the smallest bones of the facial skeleton. They lie beside the nasal bones and form part of the medial orbital wall.

Each lacrimal bone contains a lacrimal pit (fossa for lacrimal sac), which is a vertical pit that is formed together with the maxilla. The lacrimal sac is located in the pit, in which tear fluid is collected and discharged into the nasal cavity. 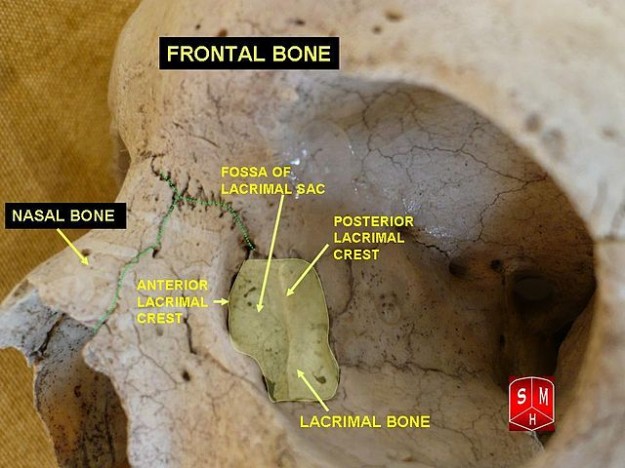 The two palatine bones form the rear part of the hard palate, part of the floor and the sidewalls of the nasal cavity, as well as a small part of the orbital floor. They are characterized by their L-shape.

The rear part of the hard palate is formed from the horizontal plate of the palatine bones. 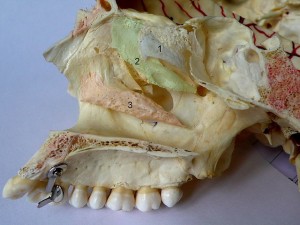 As already mentioned, all 3 nasal conchae (superior, medial, inferior) support the whirling and filtering of inhaled air before it reaches the lungs. In the picture on the right side, 3 denotes the inferior nasal concha.

The vomer is an approximately triangular bone at the base of the nasal cavity, and it forms the lower portion of the nasal septum.

It is attached to the ethmoid bone along the centerline over the perpendicular lamina, above and below to both maxillary bones, as well as to the palatine bones. 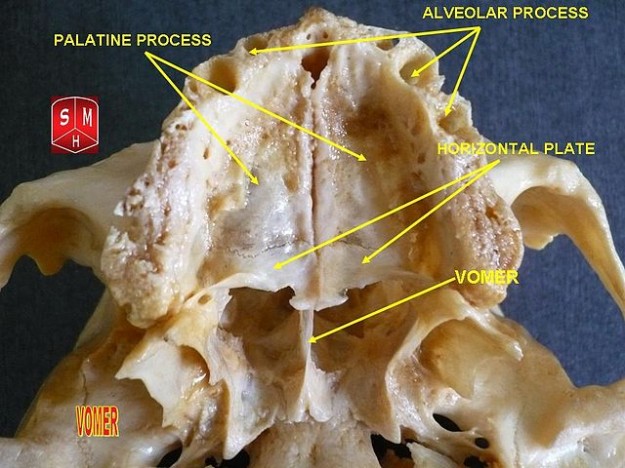 The hyoid bone is a special feature of the skeletal system and is located in the front of the neck region between the mandible and larynx. It is not attached to any other bone and is fixed on the styloid process of the temporal bone via ligaments and muscles.

The hyoid bone supports the tongue and is used as an entrance for some tongue, neck, and laryngeal muscles. The hyoid bone does not belong to the 22 cranial and facial bones.

Functions of the Skull

In addition to its function of protecting the organs, the skull stabilizes the position of the brain, blood vessels, lymph vessels, and nerves through the build-up of its inner surfaces at the meninges.

Large areas for muscle attachments are provided on the outer surface of the skull, which is responsible for head movements and facial expressions, such as the frown.

The facial bones form the basis for the face and provide openings to the digestive and respiratory systems. Along with the bones of the skull, the facial bones create protection and support for the following sensory organs:

Diseases of the Skull

The bones and joints can be damaged by a lack of exercise, poor nutrition, accidents, and tumors.

A known injury of the cranial bone is the ‘blue eye’.

A sharp bony edge is located directly on the orbit. A blow to the edge can lead to fractures or injuries of the overlying skin. Accumulation of tissue fluid or blood in the surrounding connective tissue is caused by a contusion of the skin against that edge. Swelling with corresponding coloration is the result.