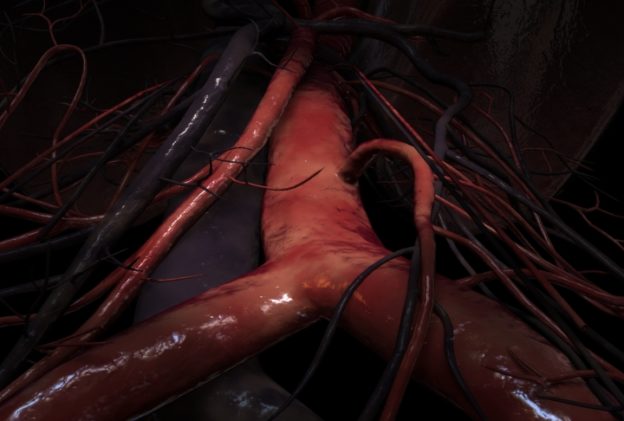 Image : “A 3D illustration of the abdominal aorta at the iliac junction” by Gegu0284. License: CC BY-SA 4.0

Embryology of the Gastrointestinal Tract

The gastrointestinal tract (GIT) is derived embryologically from the primitive gut which is formed from the endoderm lining the yolk sac. The primitive gut is divided into the foregut, midgut, and hindgut.

The foregut gives rise to the esophagus, stomach, and the first and second parts of the duodenum, as well as the liver, gallbladder, and superior part of the pancreas. All the organs derived from the foregut are supplied by the branches of the celiac trunk (artery).

The midgut gives rise to the distal duodenum, jejunum, ileum, cecum, appendix, ascending colon, and the proximal two-thirds of the transverse colon. These are supplied by the branches of the superior mesenteric artery (SMA).

These three unpaired arteries (celiac trunk, SMA, and IMA) are branches of the abdominal aorta.

Image: Blood supply to the GI tract. Schematic. By Lecturio 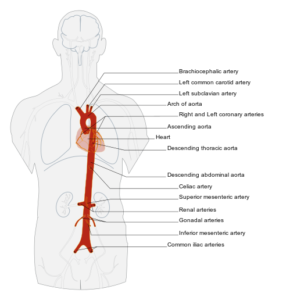 Image: Aorta and its branches in the anterior view. By Edoarado – Own work based on: Arterial System en.svg, Coronary arteries.svg. License: CC BY-SA 3.0

The GIT is supplied by the three anterior branches of the abdominal aorta. From superior to inferior, these include the celiac trunk, SMA, and IMA. These three branches are unpaired and their terminal branches anastomose to provide the collateral supply. 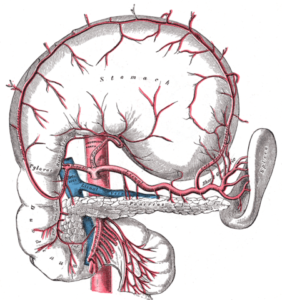 Image: The celiac artery and its branches; the stomach has been raised and the peritoneum removed. By Henry Vandyke Carter, Henry Gray (1918) “Anatomy of the Human Body”. Bartleby.com: Gray’s Anatomy, Plate 533. License: Public Domain

The celiac trunk originates from the abdominal aorta and lies in the transpyloric plane at the level of the body of the T12 vertebra.

The celiac artery has three branches which are the left gastric artery, splenic artery, and common hepatic artery.

The left gastric artery runs along and supplies the lesser curvature of the stomach.

The splenic artery supplies the spleen and pancreas. It has multiple branches including the left gastroepiploic artery that runs along the greater curvature of the stomach.

The common hepatic artery divides into the hepatic artery (supplying the hepatobiliary system), right gastric artery (which runs along the lesser curvature of the stomach), and the gastroduodenal artery.

The celiac trunk and its branches supply all the foregut derivatives which include the abdominal part of the esophagus, stomach, first and second parts of the duodenum, liver, gallbladder, spleen, and superior part of the pancreas.

This midgut artery originates from the abdominal aorta at the level of the L1 vertebra below the celiac trunk. It then runs antero-inferiorly behind the splenic vein and the neck of the pancreas. During this part of its journey, it is separated from the aorta by the following structures:

The SMA branches into the intestinal arteries, inferior pancreaticoduodenal artery, ileocolic artery, and right and middle colic arteries. These supply the organs of the midgut – the third part of the duodenum, jejunum, ileum, cecum, appendix, ascending colon, and proximal two-thirds of the transverse colon. 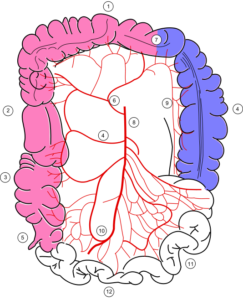 Branches of the SMA and IMA anastomose to form the marginal arteries of Drummond and Riolan’s arcade (anastomoses between the left colic and medial colic artery). They provide abundant oxygenated blood to the colon, except for certain watershed areas with poor blood supply like the splenic flexure of the colon.

The marginal artery runs distal, while Riolan’s arcade (also known as the meandering mesenteric artery) runs proximal to the root of the mesentery. The terminal branches of the right colic, middle colic, left colic, and sigmoid branches enter the colonic wall and are called the vasa recta.

Clinical Relevance of the Abdominal Arteries

The diagnosis can be confirmed with imaging modalities such as ultrasound, CT angiography, or MR angiography. Treatment is the surgical excision of the constricting median arcuate ligament to decompress the celiac artery.

This rare syndrome is caused by the compression of the distal third of the duodenum between SMA and the abdominal aorta. It should be differentiated from celiac artery compression syndrome as well as the nutcracker syndrome.

It is characterized by a severe, stabbing, post-meal, abdominal pain, early satiety, nausea, and vomiting. Early diagnosis is difficult but essential as delay can lead to severe dehydration, malnutrition, and electrolyte abnormalities. Treatment consists of medical management and, in severe cases, surgical bypass. 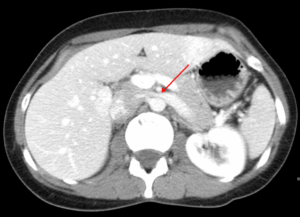 Image: Compression of the left renal vein (marked by the arrow) between the superior mesenteric artery and the aorta leading to the nutcracker syndrome. By James Heilman, MD – Own work. License: CC BY-SA 3.0

This syndrome is characterized by hematuria and left flank pain due to the compression of the left renal vein between the abdominal aorta and SMA.

In the sagittal or transverse plane, the abdominal aorta and SMA appear like a nutcracker with a nut (the left renal vein) in its jaws. The diagnosis of the syndrome is usually confirmed with left renal venography. Treatment consists of endovascular stenting or renal vein re-implantation depending on the severity of the symptoms.

The SMA is rarely affected by atherosclerosis. However, in rare cases, especially following atrial fibrillation or myocardial infarction, the artery may get occluded by a thrombus leading to ischemic colitis.

SMA thrombosis is characterized by an acute onset of abdominal pain and blood in the stools. In most cases, there is a history of recent myocardial infarction or atrial fibrillation. A watershed area like the splenic flexure is commonly affected. Diagnosis is confirmed with mesenteric angiography, and definitive treatment consists of emergency laparotomy with bowel resection and anastomoses.

When blood flow to parts of the colon is chronically reduced due to arterial blockage or thrombus, the colon may become inflamed and eventually gangrenous. In such situations, the marginal artery and the arc of Riolan may be significantly enlarged in an attempt to perfuse the ischemic colonic segment.

This surgical procedure involves the removal of the left side of the large bowel, which is usually necessary in the case of tumors. The IMA and its branches have to be resected during this surgery as the IMA supplies the left colon.

Blood Supply to the GIT via oganatomy.org

Vascular anatomy of the gastrointestinal tract via nih.gov

Blood Supply to the Gut via anatomyzone.com

The clinical relevance of coeliac trunk variations via nih.gov