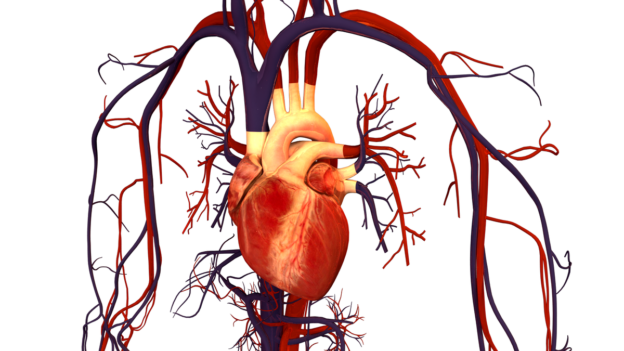 Mean arterial pressure is not only affected by components of the circulatory system, but also by other organs that constitute various systems. The two major determinants of MAP are cardiac output and peripheral resistance. The relation between MAP and its determinants is given by the following equation:

It is important to note that the equation only represents the relationship between the MAP and its determinants. The actual MAP can be calculated using the following formula:

Cardiac output is defined as the volume of blood pumped by the heart per minute. The greater the cardiac output, the greater is the mean arterial pressure.

Cardiac output is dependent on stroke volume and heart rate and can be represented as follows:

Both the heart rate and stroke volume are directly proportional to cardiac output. However, under a constant value of cardiac output, they share an inverse relationship with each other.

Heart rate refers to the number of heartbeats per minute. As the heart rate increases, the cardiac output increases correspondingly. The heart rate is controlled by a relative balance between the parasympathetic and sympathetic nervous stimulation.

The former decreases heart rate, while the latter has the opposite effect. Accelerated heart rate during sympathetic stimulation is due to the release of epinephrine by the sympathetic nerves, which acts on the cardiac muscle to increase heart rate.

Stroke volume is the volume of blood pumped by the heart in one beat. This volume increases in response to sympathetic stimulation and by an increased venous return to the heart.

According to the Frank-Starling law, an increase in venous return causes an increased ventricular filling of the heart and therefore results in greater stroke volume. Intrinsic factors affecting stroke volume are myocardial contractility and size of the vascular compartment. It is calculated using the following formula:

Factors that affect venous return to the heart are as follows: 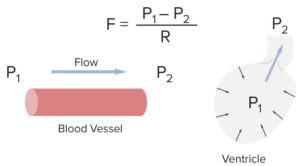 Gravity: Gravity causes pooling of blood in the veins of the lower extremities and creates a pressure gradient. This phenomenon should ideally increase venous return; however, when an individual stands up, right atrial pressure and stroke volume decrease, which eventually decreases arterial pressure.

Blood volume: The increase in blood volume increases venous return. Blood volume depends on the shift of fluids present in the vascular and interstitial compartments. It also depends on the extent of salt and water retention by the kidneys due to the action of vasopressin and the renin-angiotensin-aldosterone system.

As arteriolar radius decreases, peripheral resistance increases, as does arterial pressure. In this situation, blood flow to tissues decreases.

Arteriolar radius is influenced by local metabolic control, which may cause vasodilation and increase blood flow to tissues, or result in vasoconstriction.

Sympathetic stimulation and release of epinephrine also result in vasoconstriction. Similarly, hormones such as vasopressin and angiotensin II increase peripheral resistance by decreasing the arteriolar radius.

Aging causes a decrease in the elasticity of arteries; therefore, they do not effectively compensate for an increase in blood pressure when there is an increase in peripheral resistance.

The renin-angiotensin-aldosterone system regulates plasma sodium levels and arterial blood pressure. It is activated following a drop in blood pressure, which is sensed by the baroreceptors, or if there is decreased renal perfusion.

Angiotensin II causes vasoconstriction of the arterioles. This increases peripheral resistance and an increase in systemic arterial blood pressure. It also causes a release of aldosterone from the zona glomerulosa of the adrenal cortex. Aldosterone acts on the distal convoluted tubules and collecting ducts of the kidneys to increase sodium reabsorption.

Angiotensin II stimulates the pituitary gland to secrete antidiuretic hormone (ADH), also known as vasopressin. ADH then acts on the collecting tubules to increase water reabsorption by the formation of aquaporins on the luminal surface of epithelial cells.

The final outcome of the activation of the renin-angiotensin-aldosterone system is an increase in peripheral resistance, and sodium and water retention, which causes an increase in arterial blood pressure.

A decrease in blood volume causes the release of epinephrine and norepinephrine from the adrenal medulla. Both neurotransmitters tend to increase arterial blood pressure by increasing heart rate and cardiac force of contractility.

Norepinephrine induces vasoconstriction by stimulating the α-receptors in blood vessels.

Erythropoietin is a hormone secreted by the kidneys in response to low oxygen levels in the blood. Erythropoietin acts on hematopoietic stem cells in the bone marrow and stimulates the production of red blood cells. An increased number of red blood cells increases plasma viscosity, which in turn increases peripheral resistance and arterial pressure.