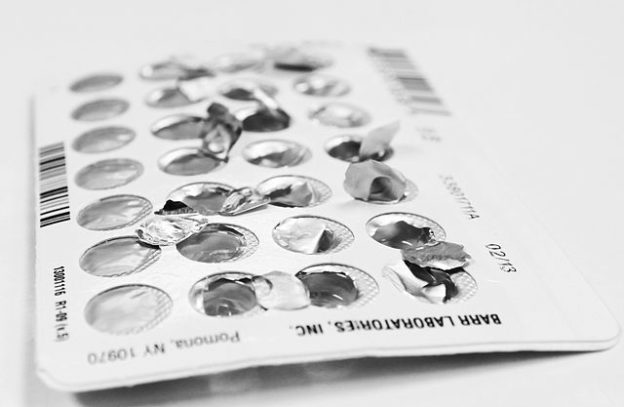 Pregnancy in adolescents is quite common with an estimated incidence of 69 per 1000 in girls aged between 15 and 19 years in the U.S. This can be explained by the nature of sexual behavior in this age group, the poor compliance with the use of contraception, and the imperfect use of the different methods of contraception.

Approximately 78 % of adolescents report the use of some form of contraception in their first intercourse. This figure increases to 86 % when an adolescent is questioned about the most recent intercourse.

The use of dual contraception in adolescents is less common compared to adult women. Additionally, the rate of contraception discontinuation is higher in this age group.

A failed contraception attempt is defined as when the adolescent gets pregnant without planning. Before we discuss the failure rates for the different contraception methods that are used by adolescents in the United States, it is important to define what is perfect use and what is a typical use of contraception.

Perfect use is defined as the use of a given contraception method correctly and consistently. Unfortunately, this is very uncommon in adolescents. Therefore, whenever discussing failure rates with the adolescent, it is always important to use the rates provided for typical use and not perfect use. Typical use means that the woman or the couple uses a certain contraception method but not consistently or with few mistakes.

Counseling about Contraception in an Adolescent

In many cases, the adolescent girl is accompanied by her parents. In that scenario, it might seem that she is seeking medical attention for mild dysmenorrhea or dysfunctional uterine bleeding. Careful and meticulous history taking skills can reveal the real reason behind her visit is to inquire about the available methods of contraception for her.

When obtaining a sexual history from an adolescent, it is important to define the adolescent’s age, cognitive, and socio-behavioral maturity. Adolescents usually care about their confidentiality and might find it difficult to discuss their needs and concerns in front of their parents. Therefore, questionnaires should be provided for the adolescent to fill whenever appropriate for her, i.e., at home. The main goal in this part of your history is to determine the nature of sexual behavior the adolescent is engaged into and the type of contraception she seeks if any. 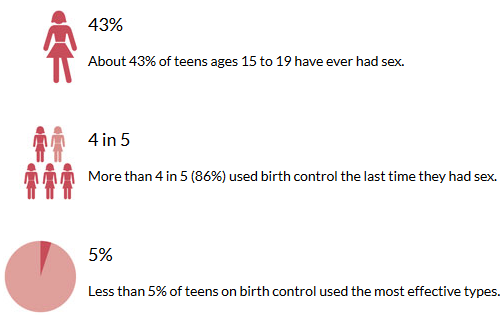 Image: “These are CDC stats about teenager sexual behavior in the United States.” by Centers for Disease Control and Prevention. License: Public Domain

The next step in your assessment should be taking a full medical history of the patient. Perhaps the patient is seeking contraception for other causes or concerns and not for simply preventing pregnancy. For instance, many adolescent girls with dysfunctional uterine bleeding need oral contraceptive pills even if they do not engage in any sexual activity. Additionally, adolescent girls with thrombotic disorders or those with acne might need special consideration when determining the type of contraception to be used.

Common Myths about Contraception in Adolescents

Whenever the topic of contraception is opened with an adolescent or her parents, many misconceptions and myths about contraception use arise. These myths might be the reason behind poor compliance and the increased failure rate seen in adolescents.

Another common myth is that adolescents should not be on depot medroxyprogesterone if they are obese and they should not use this method of contraception for more than two years because of the increased risk of decreased bone mass density. In reality, the use of depot medroxyprogesterone is safe in obese women and adolescents and prolonged use of this method of contraception is not associated with an increased risk of decrease in bone mass density.

The last myth that we will discuss here is more common among the caregivers of the adolescent girl. Some parents believe that the use of oral contraceptive pills, especially estrogen-based contraceptives, are linked to an increased risk of unsafe sexual behavior. This observation was not confirmed or backed up by any research.

Available Methods of Contraception for Adolescents

Unfortunately, due to the common myths surrounding these methods, they are rarely used by adolescents. The most common contraindications for long-acting contraceptive methods are pregnancy, active sexually transmitted infections, current pelvic inflammatory disease, and anatomic abnormalities. Adolescents with severe liver cirrhosis, breast cancer or endometrial cancer should not receive an ENG implant.

Depot medroxyprogesterone acetate (DMPA) is an injectable contraceptive that has an intermediate-acting duration. The estimated failure rate of typical use of DMPA in adolescents is 6 % whereas it is 0.1 % with intrauterine devices. DMPA is commonly associated with irregular vaginal bleeding which can lead to the discontinuation of this method. Weight gain is also reported in up to half of the adolescents who use DMPA.

These methods are highly dependent on the adolescent’s compliance, hence the higher failure rate with typical use. The main advantages of these methods are the absence of weight gain association, improved acne symptoms, reduced and more regular menstrual bleeding, improved premenstrual symptoms, reduced risk of ectopic pregnancy, and reduced risk of ovarian and endometrial cancer. Most formulations of combined oral contraceptives have estrogen. 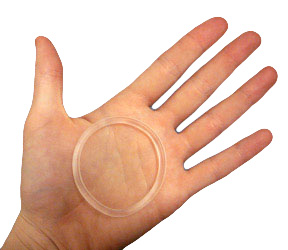 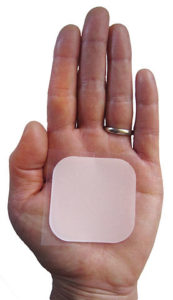 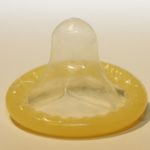