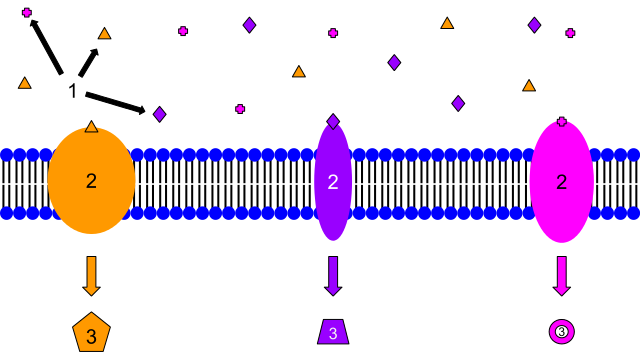 Image: “1. Ligands 2. Receptors 3. Secondary Messengers. These are examples of membrane receptors. Typically, they are proteins that are embedded in the membrane. Although there are many different ligands located outside of the cell, membrane proteins are specific, and only certain ligands will bind to each one. That is why each protein has a different ligand, and also induces a different cellular response. The response may be transcription of a gene, cell growth, or many other cellular actions.” by Isaac Webb. License: CC BY-SA 3.0

Note: A receptor is a protein within a cell or in a cell membrane, which responds specifically to a particular neurotransmitter, hormone, antigen, or other substance (ligand). It usually undergoes a conformational or biochemical shift in such a way that it initiates a chain of intracellular events by which the cell reacts to the initial ligand.

Receptors are specific areas of proteins and glycoproteins embedded in the cellular membrane or in the nuclei of living cells. Ligands may selectively bind to these receptors. Binding of ligands is significantly affected by the stereoelectronic structure of compounds which will result in specific types of interactions with the receptors.

The ligands usually selectively bind with the receptors that have complementary properties with it. When ligands attach to these receptors, a biological response – positive or negative – will occur. Positive responses involve promoting or activating physiological processes, such as the opening of ion channels. Negative responses occur if the reverse happens. The binding of the ligand to the receptor causes inhibition of physiological processes.

One common ligand is pharmaceutical drugs. Each drug is a ligand for a particular receptor. And drugs, depending on their properties, can be agonistic or antagonistic of a receptor and the specific physiological processes associated with it. Drugs that result in a positive physiological response are called agonists, while drugs that bind to the receptor but do not cause a response or cause the inhibition of a response, are called antagonists. For example, muscle relaxants bind to cholinergic receptors, and a naturally occurring agonist at this class of receptors is acetylcholine:

Other active sites where drugs can bind include enzymes. This apparent contradiction was resolved by the introduction of the idea of a receptor. A receptor is a site where a drug binds and then brings about a physical response. 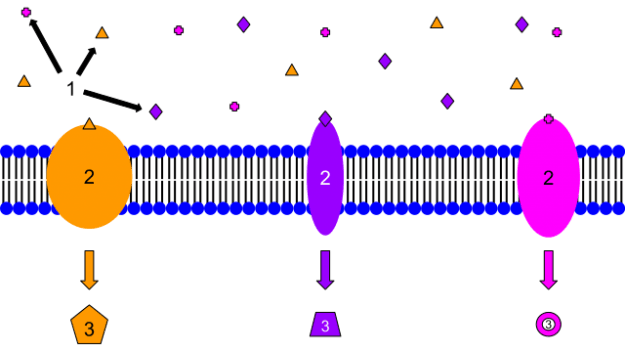 Image: “1. Ligands 2. Receptors 3. Secondary Messengers. These are examples of membrane receptors. Typically, they are proteins that are embedded in the membrane. Although there are many different ligands located outside of the cell, membrane proteins are specific, and only certain ligands will bind to each one. That is why each protein has a different ligand and also induces a different cellular response. The response may be a transcription of a gene, cell growth, or any other cellular actions.” by Isaac Webb. License: CC BY-SA 3.0

Drugs are recognized by their targets via various types of interaction. Drugs binding at the same site but in a different way can give rise to different effects (e.g. agonists and antagonists). Knowledge of these interactions allows us to work out how drugs bind, design new drugs, and predict how they will bind.

The type of binding between ligands and receptors is governed by the concept of chemical bonding. Intra- and intermolecular forces of attraction play a big role in understanding the binding chemistry between ligands and receptors. These interactions include covalent bonding, ionic bonding, and dipole-dipole interactions. When the ligand approaches the receptor and is within an appropriate distance, a bond is formed and the drug’s mechanism of action occurs (e.g. agonism or antagonism).

A small number of drugs can also make covalent bonds with their targets. Covalent bonds are strong and hence drugs forming them will usually be permanently bound to their target. Some anti-cancer drugs alkylate the DNA within tumor cells. The alkylated DNA cannot function and hence the cell dies (e.g. mechlorethamine).

In an electronic dipole, a polarized bond is formed. In it, there is a partially positive end and a partially negative end. The interaction between the positive and negative ends of different compounds form electrostatic bonds with other polar molecules or ionized compounds. 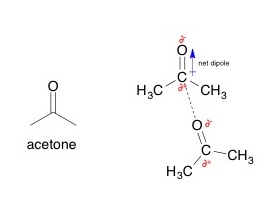 In many molecules, there are permanent dipoles due to the difference in electronegativities of atoms sharing chemical bonds. 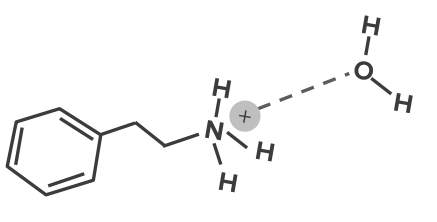 This type of bonding plays a key role in the water solubility of a drug.

This type of complex is formed between electron donor groups adjacent to electron acceptor groups. The relative positive or negative molecules transfer portions of its charges to the other molecule. In the process, a weak electrostatic bond is formed.

This is a very weak form of bonding which only occurs when the non-polar sections of molecules aggregate together in the presence of water because of the low water solubility. Hydrophobic molecules don’t like to interact with polar water molecules, and so when water is present, their tendency is to aggregate and be closer to each other.

Van der Waals bonds exist between all atoms. They arise because the electron cloud associated with an atom or molecule is constantly moving so that the electrons are never evenly distributed. Small, local, instantaneous dipoles (charge separations) occur. Diploes behave like small magnets and will attract one another.

These forces are insignificant for individual atoms but can be important in parts of molecules with lots of atoms, especially if the surfaces of the molecules are the right shapes to allow for a close fit.

Hydrogen bonds are special types of dipole interactions. They are formed when functional groups are present which contain N, O, or S and there is H linked to one of these atoms. For example, between two molecules of water:

Hydrogen bonds are important not only in drug-target interactions but also in holding together the structure of proteins and DNA.

Ionic bonds, formed between molecules with opposite charges, are strong and can act across long distances. Drugs are often ionized and the active sites in receptors contain charged groups (carboxylic acids and amines).

London dispersion forces may also cause interactions between a drug and a receptor. The interaction is very weak as there is no permanent dipole present in the molecules. This means the positive and negative ends only occur for a very short span of time. They usually arise because of the uneven distribution of electrons at a specific time period.

In order for drugs to fit an active site, they must first have the correct shape.

Usually, only one isomer of a drug will have the required activity. Most natural molecules have stereocentres and occur in single optical isomers (e.g. the amino acids which make up proteins, and hence receptors and enzymes).

However, drugs should be administered as a single enantiomer, since the mirror images may have other effects including:

These occur when there is no free rotation around a bond (e.g. double bonds). The functional groups end up in different places.

Molecules can adopt preferred shapes although they can exist in other conformations (e.g. cyclohexane). If the drug has a preferred conformation that fits the active site, then it will usually bind more easily than if it needed to adopt an alternative shape.

The Role of Water

Any system will adopt the lowest energy configuration. In chemical systems, this will mean that the participant will form as many bonds as possible of the strongest type. For example, water molecules will create H-bonds with each other. In ice, each molecule makes 4 H-bonds. In liquid water, H-bonds are continuously forming and breaking—on average each molecule makes 3.4 H-bonds. At any one time, liquid water can have highly H-bonded clusters and areas with few H-bonds. 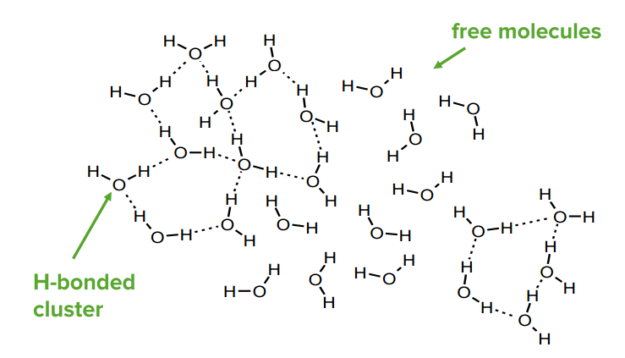