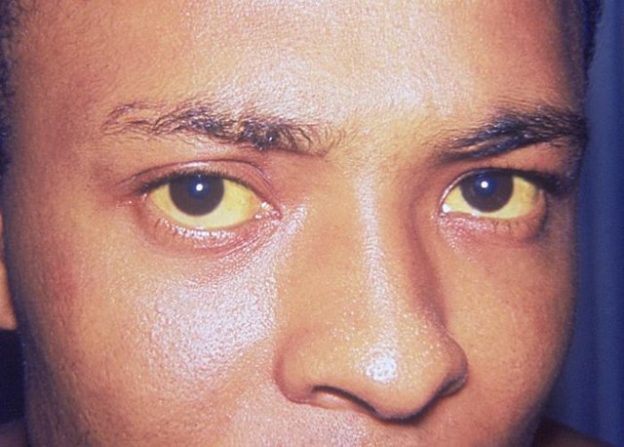 Bilirubin is a yellowish compound that is produced in the catabolic pathway of the breakdown of heme in vertebrates. Catabolism of heme is needed to clear the body of the waste products due to the death of aging red blood cells. The structure of bilirubin consists of an open-chain of four pyrrole-like rings.

Bilirubin is produced by the breakdown of the red blood cells in the body. It travels to the liver and is secreted to the bile duct. It is eliminated eventually from the body in the stool. A typical red blood cell has a lifespan of about 120 days. The hemoglobin present in the RBCs gets broken down into bilirubin and other substances.

Accumulation of this substance in circulation gives a yellow discoloration of mucous membranes and skin which is known as jaundice. This condition is a common symptom of liver disease.

Bilirubin is produced by a two-stage reaction that occurs in the reticuloendothelial system of cells. These cells include phagocytes, Kupffer cells of the liver, and cells in the bone marrow and spleen. The catabolism of heme proteins occurs in the microsomal fraction of the cell by heme oxygenase. The action of this enzyme is substrate-inducible, which means the heme serves both as the substrate and the cofactor for the reaction. 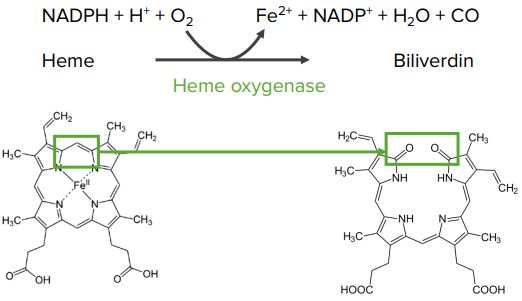 The process begins with the breakdown of red blood cells that contain heme pigment, globin chains in association with iron pigments. After remaining in circulation for approximately 120 days, each of the individual components are broken down to various products.

The amino acids from the protein component of hemoglobin are released from the structure and are catabolized or re-used for protein synthesis. The heme portion, on the other hand, undergoes degradation starting with a mixed-function oxidase reaction that causes an opening of the ring and the conversion of one of the methane bridge carbons to carbon monoxide.

The next step in the process is the release of the iron from the resulting linear tetrapyrrole. The iron is then transported to storage pools in the bone marrow to be reused in erythrocyte production. This iron atom that reaches the heme oxygenase is usually oxidized to its hemin or ferric form.

After the release of the iron atom and the ring-opening of the heme group, Biliverdin is produced. Biliverdin is a green tetrapyrrolic bile pigment that is responsible for a greenish color during bruises.

The biliverdin is reduced by biliverdin reductase. Biliverdin reductase is an enzyme found in all tissues, especially in reticulo-macrophages of the liver and spleen. This enzyme is responsible for converting the biliverdin to bilirubin by reducing the double bond between the second and third pyrrole ring to form a single bond. The reduction process of biliverdin requires NADH or NADPH as a cofactor.

In the uptake to the liver, bilirubin is taken up at the sinusoidal surface of liver cells by a facilitated transport system. Once the bilirubin molecule enters the cell, it is bound to the cytosolic proteins like glutathione S-transferase, also called ligandin, to prevent its re-entry to the bloodstream.

In the liver, reacting it with two glucuronic acid molecules solubilizes bilirubin. This is then as for bilirubin not to persist in cells because of its highly non-polar nature. The conjugation with glucuronic acids converts bilirubin into a more polar molecule.

The enzyme UDP-glucosyltransferase, a bilirubin-specific enzyme in the endoplasmic reticulum, catalyzes the step-wise transfer of two glucosyl moieties from a UDP-glucuronate to the bilirubin molecule. The solubilized bilirubin, bilirubin diglucuronide is then secreted to the bile and finally excreted via the intestine. 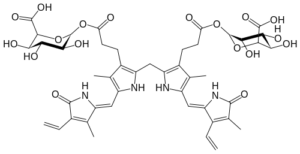 Most of the soluble bilirubin (conjugated) is excreted via the bile into the intestines. Most of the bile acids are reabsorbed into circulation at the terminal ileum, whereas the conjugated bilirubin passes into the large intestines where colonic bacteria deconjugates it into urobilinogen. The product is later oxidized into stercobilin that gives feces its characteristic color and urobilinogen in urine. A trace of urobilinogen is reabsorbed to enter the hepatic circulation into the liver where it is excreted again via the intestines forming the enterohepatic circulation