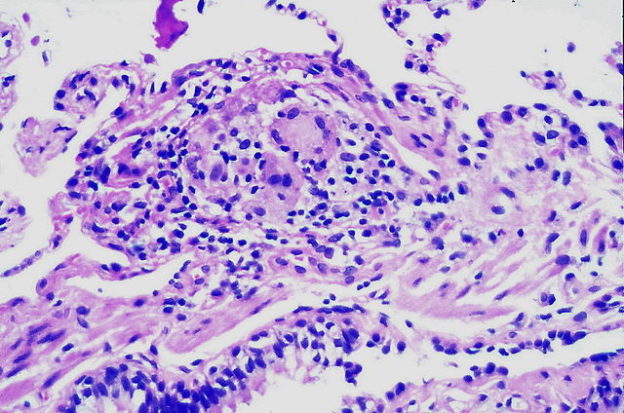 Berylliosis is an occupational disease and can affect the lungs as acute berylliosis or chronic berylliosis. It is commonly associated with aerospace and nuclear industry workers.

Acute berylliosis occurs due to chemical irritation caused by the metal Beryllium. It is characterized by sudden onset with rapid progression of cough and dyspnea due to a non-specific inflammatory pneumonitis. Occasionally, it may also involve the skin or the eyes. However, after the introduction of the Be-exposure standards in 1949, the occurrence of acute berylliosis has decreased remarkably.

Chronic berylliosis occurs insidiously and progresses slowly over several years after initial exposure to Beryllium. It is characterized by inflammatory granulomas in the subcutaneous tissues and liver, with scarring and subsequent interstitial pulmonary fibrosis. 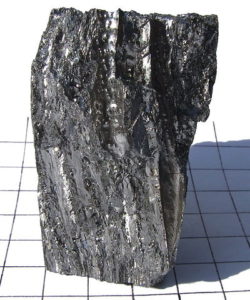 Of the individuals exposed to Beryllium, approximately 2—5 % may develop a hypersensitivity granulomatous disease, a condition known as chronic beryllium disease (CBD). The condition is commonly seen in workers exposed to high levels of Beryllium. The general population is rarely affected by this condition as the ambient Beryllium levels in the air are normally less than 0.03 ng/m3.

Adults are the most commonly affected individuals, although children with secondary exposure have also been reported to suffer from this condition. Berylliosis has no sex predilection with males and females being equally affected. No racial predisposition has been reported, although genetic susceptibility to the disease has been observed.

The estimated mortality rate of CBD ranges between 5.8 to 38 %. The reasons for this huge variability in mortality rates of CBD are unknown. The main morbidities of CBD are progressive decline in lung volume and diffusing capacity, pulmonary fibrosis, respiratory failure, and cor pulmonale.

Pathophysiology and Presentation of Berylliosis

Beryllium is a rare earth metal, which can form alloys with several other metals. It was earlier used in fluorescent lights and is currently used in electronics, aerospace, dental alloys, ceramics and metal extraction industries.

Workers become exposed to Be by inhaling fumes or dust, or through contact with the metal with skin. Following inhalation and over a period of time, Beryllium acts as a hapten, or class II-restricted antigen, stimulating the proliferation and accumulation of helper T-cells with a delayed hypersensitivity type reaction.

This initiates cellular events like changes in pulmonary permeability, production of pro-inflammatory cytokines and growth factors, which eventually lead to the formation of granulomas. Gradually, with the progression of the disease, the granulomas evolve to form fibrous nodules with subsequent impairment of pulmonary function.

The genetic susceptibility to Be is linked to HLA-DPB1 alleles, which possess a glutamic acid at the 69th position on the beta chain. Workers with the mutation in the Glu69 HLA-DPB1 position have a higher incidence of Beryllium sensitization and chronic berylliosis.

The rate of progression from Be sensitization to berylliosis cannot be predicted, although it may vary from 6 to 8 %. Symptoms may start within weeks to decades after initial exposure to the metal.

Initial symptoms may be innocuous and include cough and difficulty in breathing. There may be inspiratory rales on pulmonary auscultation, lymphadenopathy, cutaneous dermatitis or rash and hepatosplenomegaly. Other symptoms may include weight loss, chest pain, fever and joint aches.

Several conditions and diseases can mimic the signs and symptoms of berylliosis:

Blood BePLT is the test of choice to diagnose Be-sensitization or berylliosis. The test, which is performed in a few specialized laboratories, consists of exposing mononuclear cells from peripheral blood to beryllium salts in vitro. A positive test is indicated by the proliferation of the cells in the presence of Be.

Chest radiographs appear normal in most patients although hilar lymphadenopathy and increased interstitial markings may be noted in some cases. 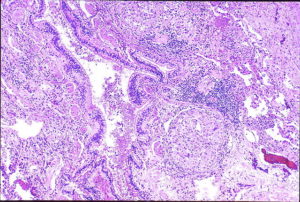 Pulmonary function tests including spirometry, DLCO (diffusing capacity for carbon monoxide), lung volumes as well as arterial blood gases and cardiopulmonary exercise test are performed to monitor disease progression. Spirometry may show restrictive or obstructive patterns or both. DLCO tends to decrease over the course of the disease. Abnormalities may be detected in gas exchange during exercise, and it is the most sensitive test.

Laser microprobe mass spectrographic analysis (LAMMS) is used to detect Be in lung biopsy specimens, but this test is only available in a few centers.

Bronchoscopy with bronchoalveolar lavage (BAL) and transbronchial biopsies is used to confirm the diagnosis. BePLT test is also performed on BAL cells. Bronchoscopy can be repeated if the findings of the first bronchoscopy are negative.

Open lung biopsy is warranted in rare cases when the diagnosis cannot be confirmed even after a repeat bronchoscopy.

Histopathology shows non-necrotizing (non-caseating) granulomas similar to the ones seen in sarcoidosis.

For the accurate diagnosis of CBD, we suggest to use the following diagnostic criteria:

Treatment and Prognosis of Berylliosis

Preventive strategies form the crux of managing berylliosis. The mainstay of treatment is advising patients with chronic berylliosis to avoid further exposure to Be. Corticosteroids with regular monitoring of pulmonary function tests and high-resolution tomography may help to assess the progression of the disease. Oral corticosteroids, if started early in CBD, might not only halt the progression of the disease but actually induce some regression in CBD pathology.

However, once pulmonary fibrosis develops, even corticosteroids cannot reverse the disease. Methotrexate is an option for those patients who do not respond to corticosteroids. Lung transplantation is the only known treatment which can help to alleviate end-stage disease.

Affected individuals may have presentations ranging from no symptoms to severe symptoms, pulmonary dysfunction and death. Although the lungs are primarily affected, other organs like the liver, extra-pulmonary lymph nodes, skin, salivary glands, myocardium, skeletal muscle, bones and kidneys may also be involved.

This occupational disease can be prevented with continuous monitoring of exposure, timely tests of beryllium sensitization and regular medical evaluation of workers for chronic berylliosis. Workers can be advised to change their work clothing and shoes, shower and change into their civilian (non-work) clothes to decrease the risk of carrying the Be dust on their body back to their homes and families.