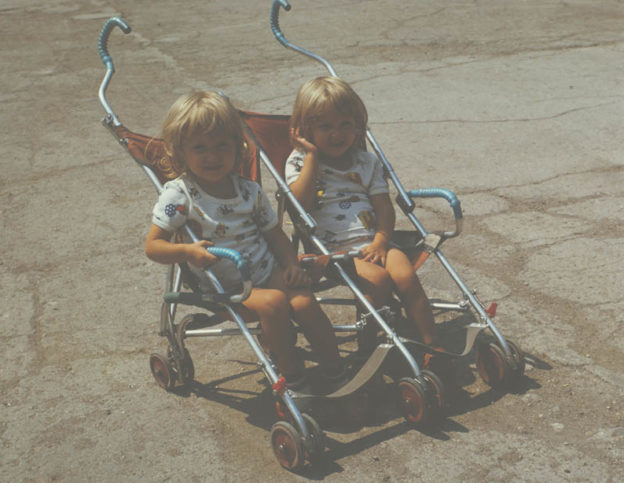 Intellectual ability, alcoholism and criminal behavior of the offspring clearly resembled their biologic parents in these studies. Additionally, the risk of mental disorders, such as mood disorders and schizophrenia was similar to the risk in the biologic parents’ families and not the adoptive family.

Even more surprisingly, adopted children who were raised by schizophrenic parents or by parents with mental disorders were not at an increased risk of developing a mental disease, further emphasizing the importance of genetic predisposition to these disorders.

The next step in confirming the role of genetics in determining behavioral traits was to study twins. Monozygotic twins are thought to be genetically identical, while dizygotic twins share only 50 % of their genetic makeup.

Twin studies focusing on identifying a positive association between certain traits hypothesize that the similarities in behavioral traits should be higher in monozygotic twins than dizygotic twins.

Interestingly, personality traits, social attitudes, and even divorce rates were more similar in monozygotic twins than dizygotic ones, confirming the importance of genetics in affecting behavior. Monozygotic concordance studies never reach a perfect score of 1, but usually, yield a ratio that is above 0.5 when there is a genetic association. This finding shows that the environment still plays an important role in determining the strength of expression of the predetermined behavioral traits.

The next logical step in twin and adoption studies was to study the role of age and development on genetic predisposing to certain behavioral traits.

These studies showed clearly that children’s behavior is strongly determined by their environment rather than genetics, while adults’ mental health, antisocial behavior, and social attitudes are largely based on genetic predisposition rather than the environment. For instance, schizophrenia, a thought disorder, was found to be highly associated with certain genes and to be little related to the environment. 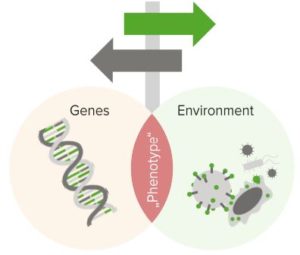 “Interaction between Heredity and Environmental Influences” Image created by Lecturio

Because the risk of developing certain behavioral traits in adopted children and monozygotic twins was never solely explained by genetic predisposition, psychologists reached a hypothesis that genetic predisposition puts the subject at an increased risk of developing certain traits, and the environment then can either ameliorate or increase the strength of these traits.

This genetic–environment interplay has become of tremendous interest and importance to behavioral genetic scientists. In simple words, they hypothesize that genetics contribute towards the similarity between related individuals, while the environment is responsible for the differences.

The effect of genetics on overall IQ is challenging to understand for several reasons. Firstly, children’s IQ is related to their environment, their uprising and is little affected by genetic predisposition unless a known neurodevelopmental disease is evident.

Secondly, the ultimate IQ of adults seems to be genetically determined rather than affected by the environment, emphasizing the role of development and age on behavioral genetics.

Finally, monozygotic twins and hereditary studies of IQ failed to reach a concordance level above 0.5, emphasizing that genetics alone cannot explain IQ, and genetic–environment interplay is a real thing and an important determinant of IQ.

This recent work allowed the identification of several genetic loci where several polymorphisms can occur and each of them is associated with an increased risk of certain traits.

It is important to note that a single polymorphism rarely has a causative relationship with a certain trait. However, the interplay between several polymorphisms in different loci eventually contributes to a phenotype that either has a positive or a negative trait. This trait can be behavioral, mental or physical.

One of the earliest polymorphisms to be studied in behavioral genetics was in the alcohol dehydrogenase (ADH) gene. This gene encodes for an enzyme that is responsible for converting alcohol to acetaldehyde.

Polymorphisms in this gene can either lead to faster or slower conversion due to increased or decreased enzyme activity respectively. Accordingly, people with different polymorphisms were found to be more likely to experience dizziness, dysphoria or euphoria when drinking alcohol and these side effects of alcohol consumption are known to be important in determining drinking habits. Therefore, polymorphisms in this gene were found to be associated with alcoholism.

Dopamine receptors play an important role in the reward system. Polymorphisms in the dopamine D2 receptor gene (DRD2) were also found to be associated with an increased risk of drug addiction and alcoholism.

Genome-wide association studies also allowed us to understand why certain people are at an increased risk of developing obesity, breast cancer or Crohn’s disease when there is no clear hereditary pattern.

These findings of genome-wide associations with different behavioral traits showed with certainty that genetics are important in determining our behavior.