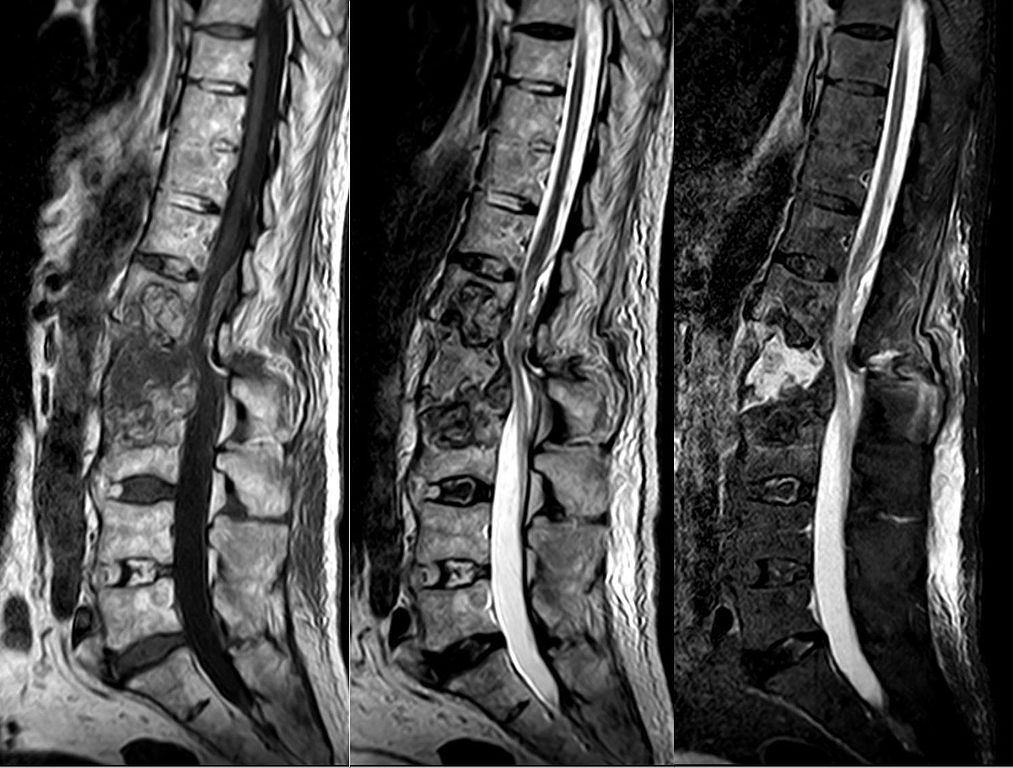 Spondyloarthropathies are a group of overlapping inflammatory rheumatic disorders that mostly affect the spine. Patients usually present with back pain caused by the inflamed vertebral column.

Common characteristics of spondyloarthropathies are the involvement of the axial skeleton and of the entheses (the sites where tendons or ligaments insert into the bone). They are also associated with the MHC class I antigen, HLA-B27.

Based on clinical and radiological findings, spondyloarthropathies can be grouped in 2 classes: 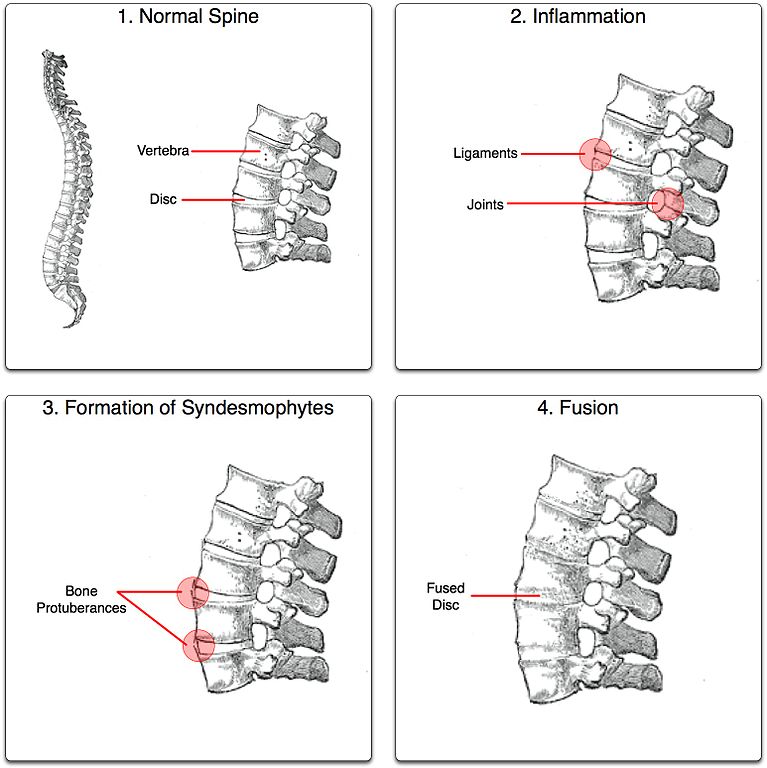 Image: ‘The ankylosis process, made by Senseiwa, with an image of the spine from Gray’s Anatomy’ by Senseiwa. License: CC BY-SA 3.0

Ankylosing spondylitis is a type of chronic arthritis of the spine and sacroiliac joints. When the disease progresses, it leads to a stiffening of the spine. Besides the axial skeleton, the peripheral joints may also be affected. 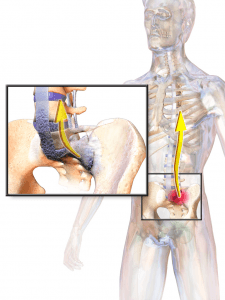 The sex ratio of ankylosing spondylitis is approximately 3:1, with 62% of patients being male and 37% female.

The age of onset is usually between late adolescence and early adulthood; 90% of patients experience the first manifestation of the disease between 15 and 40 years of age. The peak incidence is at age 25. Often, 5–10 years may pass between the first onset of symptoms and the final diagnosis. This delay of diagnosis is often because insufficient attention is paid to the patient’s medical history and because of the insidious development of the disease.

The etiology of ankylosing spondylitis is unclear. While there is a strong association between ankylosing spondylitis and HLA-B27, with about 95% of patients expressing this gene, only 4–7% of HLA-B27 carriers actually develop ankylosing spondylitis. Other genetic factors and external factors like bacteria may likely play a role here. Infections with Klebsiella, Salmonella, Shigella, Yersinia, and Chlamydia are suspected to contribute to the pathogenesis.

The detection of TNF-α is important with regard to the treatment of the affected joints.

Note: The main symptom is chronic back pain (> 12 weeks).

The inflammatory back pain can affect the entire spine. However, the pain mainly manifests in the sacroiliac region and inferior thoracic area. The pain is independent of position and typically occurs at night and in the morning hours, improving with movement over the course of the day.

Increasing stiffness of the spine can be observed (especially morning stiffness), which results in changed body posture including:

Bamboo spine: In the course of the disease, a so-called ‘bamboo spine can develop. First, the extension and then the flexion of the spine become impaired.

Other Symptoms of Ankylosing Spondylitis 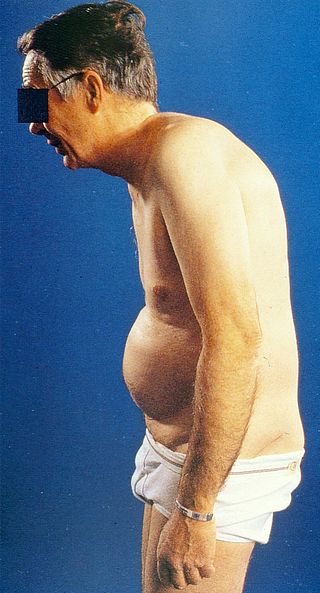 Enthesopathies: A typical symptom is a pain stemming from inflammations in the areas where the tendons insert (entheses). It mainly occurs in the area of the Achilles tendon (achillodynia) and of the plantar fascia.

Cardiac complications: Cardiac complications are very rare. If they occur, they do so in the form of conduction disorders (AV blocks, left bundle branch block) and aortic insufficiency after aortitis. The frequency of cardiac involvement depends on the duration of the disease. Examples from the literature strongly differ.

Currently, the most common classification criteria for ankylosing spondylitis are the modified New York criteria. These criteria require 1 of the 2 following conditions to be present: radiographic evidence of sacroiliitis and > 1 further criterion; or HLA-B27 positive and > 2 further criteria:

As per the 2009 Criteria for the Classification of Axial Spondyloarthritis (which is applicable to patients with back pain ≥ 3 months and age of onset of 45 years) with regard to the diagnosis of ankylosing spondylitis, either of 2 criteria ‘Sacroiliitis on Imaging Plus ≥ 1 Spondyloarthritis Feature (SpA)’ or “HLA-B27 Plus ≥ 2 Other SpA Features’ is sufficient. 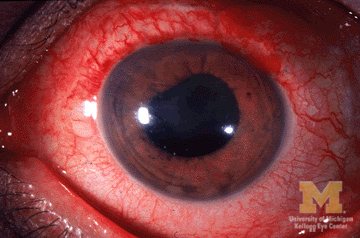 Different functional tests of the spine and sacroiliac joints are used for diagnosis and follow-up examinations. The Bath ankylosing spondylitis disease activity index (BASDAI) score is generally used clinically to measure the severity and plan the treatment.

Retroflexion of the upper leg provokes pain in the sacroiliac joint. 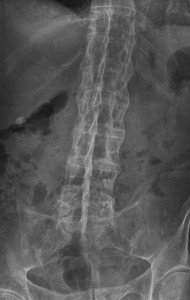 In the early stages, bone scintigraphy shows symmetric pathological accumulations at the sacroiliac joints and parts of the spine.

The plain radiograph in a progressed stage shows ankylosis, sclerosis, and erosions. Important findings at the spine are syndesmophytes. Syndesmophytes are bony protrusions from the edge of one vertebra to the next and they appear primarily at the thoracolumbar junction.

In the final stage, the so-called bamboo spine becomes apparent, which is accompanied by a complete inability to move.

With regard to differential diagnoses, the most relevant are other spondyloarthropathies  including:

Furthermore, degenerative changes in the joints and spine are possible differential diagnoses that can trigger similar symptoms.

Note: Treating the cause of ankylosing spondylitis is not currently possible.

Treatment focuses on pain reduction and a decrease of inflammatory activity. The goal is to halt the deterioration of movement impairment and deformation of the spine.

If the disease is in a markedly progressed state, surgical measures can be considered. While fusion of the spine through spondylodesis and wedge osteotomy cannot restore the original mobility, it improves the quality of life of the patient. If the hip joints are affected, partial or complete prostheses may be considered.

The course of ankylosing spondylitis is variable and ranges from mild stiffness and normal radiographs on one hand to a totally fused spine on the other. Some patients develop severe bilateral hip arthritis, severe peripheral arthritis, and extra-articular manifestations.

For about 30% of the patients, the severe functional impairments lead to psychosocial problems at work, in everyday life, and with recreational activities.

The complete clinical manifestation of ankylosing spondylitis comprises chronic pain and complete stiffening of the spine.

Unfavorable factors for disease prognosis are:

The use of TNF-α inhibitors has significantly improved these unfavorable prognostic factors.