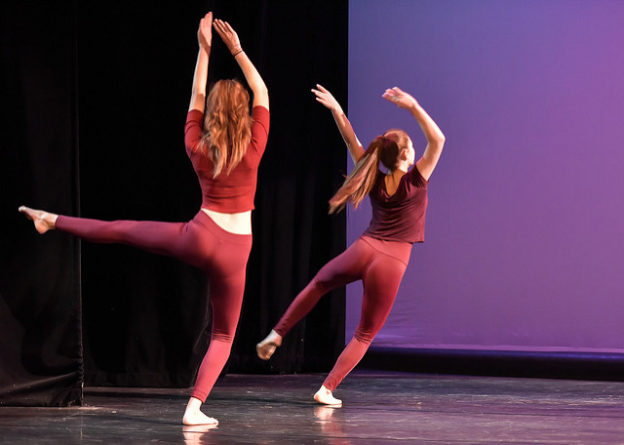 How Is Movement Possible?

Body movement relies on the motor systems located in the spinal cord, brain stem, cerebellum, and cerebrum, which communicate with each other via certain pathways.

The spinal motor system regulates movement coordination at the spinal cord level, including the most basic motor response to a stimulus – the reflex. From a hierarchical point of view, reflexes represent the lowest functional level of motor control. 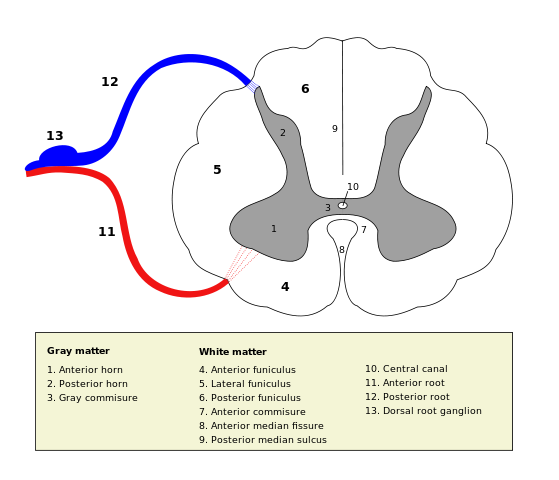 A reflex is a stereotypical response to a stimulus. A reflex arc consists of the following parts:

Sensors of the reflex arc

A fundamental role in motor control is played by proprioception, which describes the reception of stimuli from the internal body through mechanoreceptors. The following sensors are part of the spinal system, each of which is specialized for different stimuli:

Muscle spindles are stretch sensors of the skeletal muscles and measure muscle length and stretch rate. They consist of intrafusal fibers (specialized muscle cells), which are surrounded by a capsule consisting of connective tissue, and are arranged parallel to the skeletal muscles. They can be found more or less frequently in every muscle. In small muscles, which are important for precision, the number of muscle spindles is particularly high.

Tendon organs are stretch sensors of the skeletal muscles which, in turn, measure the tension in the muscles. They are arranged in series to the skeletal muscles and are located at the transition of the tendon to muscle. If the tension in the muscle increases, this stimulus is conducted via the myelinated nerve fiber of the tendon organ over the dorsal root to the spinal cord, which inhibits the motor neurons; therefore the contraction of the muscle is slowed down.

Sensors in the joints

Each joint has groups of sensors for the different movement capacities of the joint axis, for example, internal or external rotation.

The afferent pathways of the reflex arcs also contain information from the numerous mechanoreceptors and pain receptors of the skin and from the free nerve endings of the muscles (see: multisynaptic reflex).

The efferent nerve pathways of the reflex arc: motor neurons

The α-motor neurons are connected with the Renshaw cells via afferent nerve pathways that inhibit motor neuron activity through feedback inhibition.

Motor nerve fibers have a different number of branches in different muscles, depending on how precisely the muscle is working. Each axon of a motor anterior horn cell forms, together with the muscle fibers it supplies, a so-called motor unit. Therefore, the muscle fibers supplied by 1 axon all contract at once.

The area where stimulus transmission occurs from the nerve ending to the muscle is called the motor endplate (or motor nerve terminal). The endings of the nerve branches do not have any myelin sheaths and the muscle fibers are a bit elevated. The motor endplate is a special synapse in that the excitation is transferred by the chemical messenger substance called acetylcholine.

How does the transmission of the excitation at the motor endplate work?

The arriving action potential results in a presynaptic opening of calcium channels, so vesicles containing acetylcholine are released into the synaptic gap. The vesicles release their content through exocytosis, and the acetylcholine binds to the receptors in the postsynaptic membrane, which opens their ion channels. Because of the influx of the ions, muscle cells depolarize – the result is a contraction of the muscle.

Function: The brain stem, consisting of the medulla oblongata, pons, and midbrain, is a kind of coordinating unit of all motor control. Through the brain stem reflexes, quick adaptation to environmental changes is possible.

The brain stem is connected to the higher regions of the brain, and by the descending pathways coming from its nucleus areas, the motor neurons of the spinal cord are activated or inhibited.

The most important reflexes of the brain stem are:

The afferent nerve pathways of the cerebellum:

The afferent nerve pathways of the cerebellum: 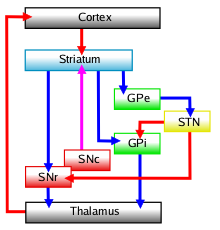 Basal ganglia are subcortical nuclei, near the thalamus. They are part of the extrapyramidal system. From a functional (not anatomical) point of view, the following structures belong to the basal ganglia:

The basal ganglia receive information from different parts of the cerebral cortex. They generate motor programs for slow movements and adapt speed and the degree of movement to the conditions of the organism. The basal ganglia have either a stimulating or inhibiting effect on motor functions. Thus, it is clear why degenerative diseases of the basal ganglia manifest with excessive movements—like in Huntington’s disease—or with akinesia—like in Parkinson’s disease.

The subthalamic nucleus is connected to the pallidum through afferent (inhibiting) and efferent (stimulating) nerve pathways. It also receives afferent nerves from the cerebrum and thalamus.

The basal ganglia are in contact with the cerebral cortex via functional loops. This means that information from specific areas of the cortex are interconnected with the corresponding parts of the basal ganglia and have a backward effect on them through outgoing efferent nerve pathways.

There is, for example, a functional loop which specifically acts on the muscles of the mouth and face, another one which controls the motor skills of the eyes. In addition, there are more complex loops that are related to cognitive performance, motivation, and inner drive. This is why disorders of the basal ganglia exhibit not only motor-related symptoms but also mental motivational and dementia changes.

Function: After a motivation for movement has arisen and a concept for the movement has been developed (both in the cerebral cortex), the concept is sent to the cerebellum and the basal ganglia. The programs for fast movements are developed in the basal ganglia and the slow ones in the cerebellum. Through the ‘gateway to consciousness’ (the thalamus), the motor programs arrive at the motor cortex, which initiates the movement.

According to Brodmann, the cerebral cortex consists of different areas, with area 4 (primary motor cortex) and 6 (secondary motor cortex) forming the motor cortex. In each of these 2 areas, the muscle groups are represented somatotopically.

The motor cortex is the highest functional level in the hierarchy of motor control. It receives information from subordinated regions of the brain, processes them, and acts as a ‘general’ giving the ultimate command to execute a movement. The following precedes the execution of movement:

The motor cortex arranges the execution of movement via the pyramidal tract (corticospinal tract). It is connected to all the important centers of the brain; for example, to the brain stem for coordination of the supporting motor skills through the corticorubral and corticoreticular tract. From the brain stem, the rubrospinal and the reticulospinal tracts lead to the spinal cord.

The pyramidal tract has over 1 million efferent fibers, which branch on their way. One portion branches towards the thalamus, red nucleus, etc., while another portion branches towards the motor nuclei of the brain via the corticobulbar tract. The major part, however, goes directly to the motor neurons of the spinal cord. Eighty percent of these fibers cross in the lower area of the brain stem and the minor part in the spinal cord to the opposite side.

Pathophysiology of the Motor Systems

Diseases of the spinal cord

A complete section of the spinal cord caudally to the lesion leads to a loss of all motor, sensory, and vegetative functions. Furthermore, an initial so-called spinal shock is common. It manifests as total areflexia, which however regresses later.

Diseases of the brain stem

Diseases of the Cerebellum

Damage to the cerebellum (for example as a result of chronic alcohol abuse) leads to disruptions in the fine movements and coordination.

The following symptoms are characteristic:

Hypotonus of the muscles: in case of damage in the area of the hemispheres

Hypertonus of the muscles: in case of isolated damage of the cerebellar vermis

Intention tremor (strong tremor of the extremities during voluntary movements) in case if hemisphere damage.

Lesions in the area of the basal ganglia lead to disruptions of harmonic movements.

Parkinson’s is a degenerative disease of the substantia nigra that involves the loss of dopamine-producing cells. Because of the loss of dopamine and the resulting excess of choline, disruptions in movement modulation can occur – characterized by the symptom triad: ‘cogwheel’ rigidity, tremor, and akinesia.

The loss of GABA and choline-producing cells in the striatum leads to a predominance of impulses triggered by dopamine. The symptoms can be tics in the form of muscle twitching, changing of the psyche, and even dementia. The movements of patients with Huntington’s disease are fast and not rhythmical and they increase in case of excitement or intending movement.

Athetosis is characterized by slow, stereotypical, vermicular movements of the extremities, which can result in abnormal joint positions.

This movement disorder manifests in the case of malfunctioning of the subthalamic nucleus. It is a fast, skidding movement with sudden onset.

Diseases of the motor cortex

Paralysis could result from lesions of the corticospinal tract (pyramidal tract) in the area of the internal capsule due to, e.g., bleeding. During the acute stage, loose paralysis of the contralateral side of the body is common, which turns into spastic paralysis and is characterized by pathological reflexes.

The pyramidal fibers in the internal capsule are arranged topographically, and therefore, depending on the position of damage, different muscle groups can be affected by the paralysis (hemiplegia of the arms or legs). As the motor neurons remain intact, there is no atrophy of the muscles. Fine motor skills are impaired and muscle strength is reduced because the internal capsule also conducts fibers to the brain stem and cerebellum.