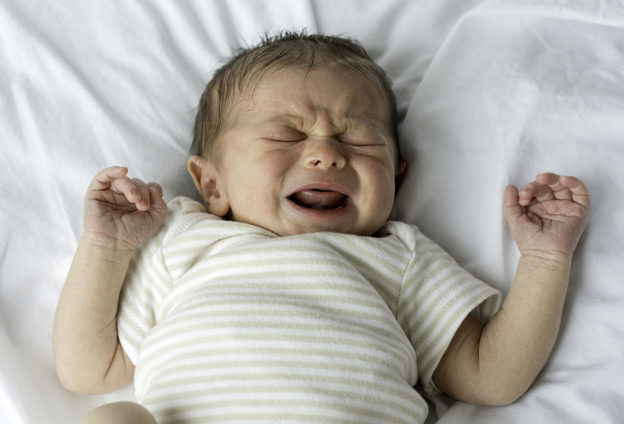 Pediatric colic is a common symptom that occurs in infants during the first few months of life. Colic describes an infant’s behavior when they have episodes of inconsolable screaming or crying while drawing up the legs.

To distinguish colic from normal crying, colic is said to be defined by the “rule of three”:

Epidemiology and Etiology of Pediatric Colic

Colic is a common behavioral problem among infants with an estimated prevalence of 3 – 28% in different studies. The causes of colic are still poorly understood. The term “colic” is used because it is assumed that this symptom occurs in infants as a result of colicky abdominal pain; the drawing up of the legs is thought to be due to a tense abdomen with abdominal pain.

However, this is controversial. Some believe that colic represents the upper limit of normal crying. Various theories have also been proposed, such as infant temperament, food allergy, parental stress, gastrointestinal immaturity and maternal smoking that contribute to the etiology of the colic in infants.

Symptoms and Diagnosis of Pediatric Colic

Colic is a clinical diagnosis, albeit a diagnosis of exclusion, based on the complete and detailed history from the parents. The common organic causes for crying should be first excluded before labeling the condition as colic.

Infants with colic have attacks (paroxysms) of screaming and crying, during which they draw up their legs. The crying is more common in the late afternoon and evening hours. The infants cannot be comforted, even by feeding. Typically, the colic starts at two weeks of age, peaks at the age of six weeks, and usually resolves by sixteen weeks of age. There is no significant vomiting and bowel motions are normal. The colic appears to be unrelated to the environmental events.

The physical examination is normal and is done to exclude organic causes of the infant’s irritability. The infants with colic are healthy, thriving, and having normal growth patterns. The diagnosis of colic should be doubtful and reconsidered if there is a failure to thrive. Laboratory testing is unnecessary but is performed in cases where an organic cause is suspected.

Treatment for colic is only supportive. The most important aspects of therapy are regular follow-ups and a sympathetic physician.

Parental education and reassurance are essential. The parents must be informed that the infant is not sick and that the excessive crying is a behavioral problem and is not harmful. It usually resolves by sixteen weeks (four months) of age. Continued inconsolable crying in infants can lead to anxiety, frustration, and feelings of inadequacy in parents. These feelings should be acknowledged and properly addressed.

Simple interventions may be helpful in improving some cases of colic. Parents should check if the infant is hungry and needs feeding, is tired or soiled. If this is the case, the infant may be settled by feeding, sleeping or having their diaper changed. Otherwise, parents can soothe their crying baby with techniques such as swaddling the infant, gentle rocking motions or non-nutritive sucking.

If the crying persists, parents can allow the infant to cry for a short period of time. Parents should look after themselves too. Getting the support of other family members or friends can be helpful in reducing stress.

It is also important to consider the risk of abuse of infants with ongoing colic, especially in family situations that are unstable, and, in such cases, referral to children’s services is essential.

Progression and Prognosis of Pediatric Colic

Symptoms of colic are generally present in the first three months of life and tend to disappear by the fourth month.