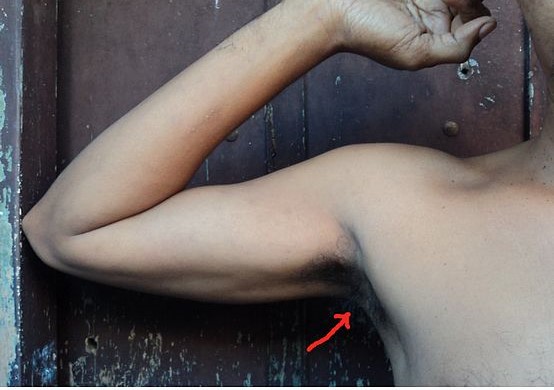 Structure of the Axilla

The axilla is a pyramid-shaped space located between the upper thoracic wall and the arm:

The apex of the axilla is continuous with the neck superiorly whereas the lateral part of the base continues into the arm.

Boundaries of the Axilla

Also called the apex of the axilla, it is directed upwards and medially into the root of the neck. This narrow space is bound:

Major vessels and nerves enter the axilla from the neck by passing through the axillary inlet and hence, this passage is also called the cervicoaxillary canal.

Anterior wall of the axilla

The anterior wall is formed by:

The clavipectoral fascia is a strong, thick sheet of connective tissue that attaches to the clavicle, splits to enclose the pectoralis minor and subclavius muscles and then continues as the suspensory ligament of the axilla to join the axillary skin in forming the base of the axilla.

Medial wall of the axilla

It is formed by:

The intercostobrachial nerve traverses the medial wall into the axilla. This nerve is the lateral cutaneous branch of the second intercostal nerve and supplies the skin of the upper posteromedial part of the arm.

The long thoracic nerve descends through the cervicoaxillary canal posterior to the brachial plexus and the axillary artery and vein, resting on the outer surface of the serratus anterior. It extends along the side of the thorax to the lower border of that muscle, supplying filaments to each of its digitations.

Identification of the two nerves is very important during the dissection of the medial wall of the axilla for lymph node removal in breast cancer.

Lateral wall of the axilla

It is formed by:

Posterior wall of the axilla

The posterior wall is formed by:

The lower margin of the latissimus dorsi and teres major muscles forms a prominent ridge called the posterior axillary fold.

Floor of the axilla

The base of the axilla is formed by the skin and axillary fascia stretching between the inferior margins of the anterior and posterior walls.

Contents of the Axilla

Embedded in the axillary fat, the contents include:

The axillary sheath is the extension of the prevertebral layer of the deep cervical fascia into the axilla and encloses the axillary vessels and brachial plexus.

Muscles Related to the Axilla

Muscles connecting the upper limb to the thoracic wall

Muscles connecting the scapula to the humerus (scapulohumeral muscles)

A musculotendinous rotator cuff is formed around the shoulder joint by 4 scapulohumeral muscles, namely the supraspinatus, the infraspinatus, the teres minor, and the subscapularis muscle. They serve as important dynamic stabilizers of the joint.

Muscles that pass through the axilla 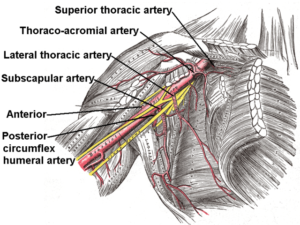 It is divided into three parts by the pectoralis minor muscle in the axilla:

In total, the axillary artery gives six branches. They are as follows:

The superior (or supreme) thoracic artery supplies the muscles in the first and second anterior intercostal spaces.

The thoracoacromial artery pierces the clavipectoral fascia and has deltoid, pectoral, clavicular and acromial branches.

The subscapular artery is the largest branch of the axillary artery and its terminal branches are:

A small branch called the anterior circumflex artery passes anteriorly to the surgical neck of the humerus to anastomose with its posterior counterpart.

The posterior circumflex artery runs posteriorly along with the axillary nerve to enter the quadrangular space bounded by teres major, the teres minor, the long head of triceps and humerus. It goes around the surgical neck of the humerus to anastomose with the anterior circumflex humeral artery, profunda brachii, suprascapular, and thoracoacromial arteries. 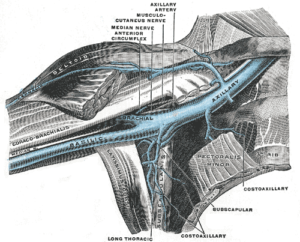 The tributaries of the axillary vein are:

By receiving the thoracoepigastric veins, the axillary vein serves as a collateral circulation in cases of inferior vena cava obstruction.

The brachial plexus is a somatic nerve plexus derived from the lower cervical and upper thoracic spinal cord. After originating in the neck, it passes over the first rib and into the axilla to supply most of the innervation of the upper limb. 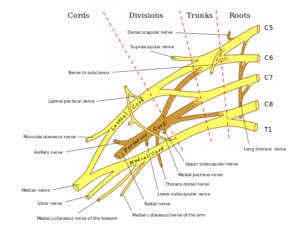 From medial to lateral, the parts of the brachial plexus are:

The roots of the brachial plexus are derived from the ventral rami of C5, C6, C7, C8, and T1. The roots pass between the scalenus anterior and scalenus medius muscles (interscalene groove) in the neck.

Upon leaving the roots, the brachial plexus organizes itself into trunks. Tree trunks are formed:

Each trunk divides into ventral and dorsal divisions, that supply the anterior and posterior compartments of the limb respectively.

The three cords are:

Branches of the brachial plexus

1. Branches of the roots

2. Branches of the trunks

These nerves originate from the upper trunk.

3. Branches of the cords

A. From the lateral cord

B. From the medial cord

C. From the posterior cord

Injuries to roots, trunks, and cords of the brachial plexus produce characteristic deformities. These include:

These group of lymph nodes receives lymphatics from the upper limb, the chest, mammary gland, shoulder, and neck. They are 20-30 in number and are divided into five groups, based on location:

Efferent lymphatics from the apical group converge to form the subclavian trunk, that drains into the thoracic duct.