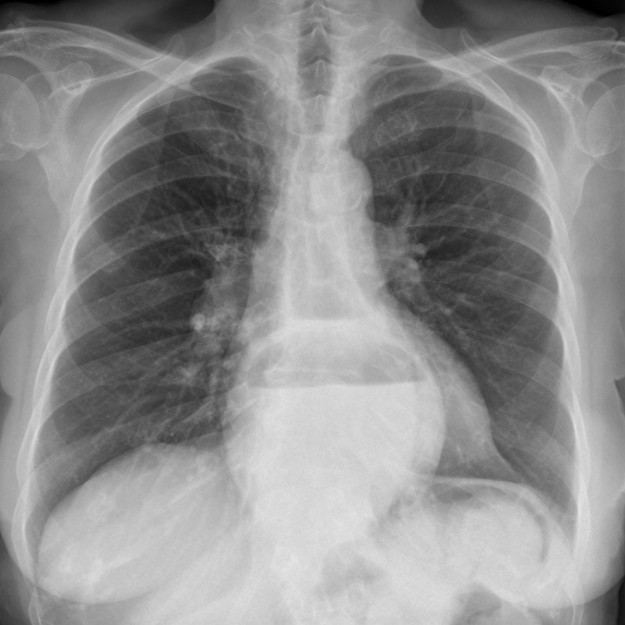 Hiatal hernia occurs when a portion of the stomach protrudes through the hiatus of the diaphragm into the thoracic cavity. 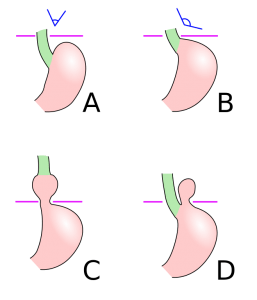 Axial hernia (figure C) accounts for nearly 90% of all cases. Its incidence increases significantly with age, with almost half the population aged above 50 years manifesting axial (sliding) hernia. The cardiac and gastric fundi relocate into the thoracic cavity. The esophageal sphincter plays a limited role.

In the so-called paraesophageal hernia (figure D), a part of the stomach (mostly the gastric fundus) along with the peritoneal sac protrudes through the inguinal ring next to the esophagus (‘paraesophageal’). The angular location of the cardia and the role of esophageal sphincter are physiologically relevant. In severe cases, complete relocation of the stomach into the thoracic cavity occurs, resulting in the so-called upside-down stomach.

Mixed hernia, which is a combination of axial (sliding) hernia and paraesophageal hernia, is detected in only 5% of all cases. In almost 40% of patients, the hiatal hernia may be accompanied by cholelithiasis. The occurrence of diverticular disease in patients with cholelithiasis and hiatal hernia completes the so-called Saint’s triad.

Esophageal hiatus is an opening located at the level of the 10th to 11th thoracic vertebrae. The esophagus, the left and right vagus nerves, and portions of the phrenic nerve extend from the cranial to the caudal direction into the peritoneal cavity.

The gastroesophageal junction is located within the diaphragmatic hiatus. Two facets of muscle strands located centrally on the diaphragm surround the esophagus to form a unit with the esophageal sphincter. Increased intra-abdominal pressure leads to reflux barrier formation physiologically.

The esophageal and gastric fundi should be at an acute angle to each other (about 50°, the so-called ‘angle of His’) for optimal barrier function. Expansion of the diaphragmatic hiatus might lead to an intrathoracic shift of the stomach, and the angle of His may increase to accommodate the change. Additionally, the cranial dislocation of gastric elements perturbs the interaction between the esophageal sphincter and the hiatus, resulting in gastroesophageal reflux.

Complaints based on the type of hernia

Sliding hernias are often detected incidentally and are of no clinical significance. Due to the limited functionality of the esophageal sphincter, up to 20% of patients present with reflux complaints such as heartburn, bloating, or the feeling of pressure and retrosternal pain, especially when lying down. Acid reflux can lead to esophagitis, which may be associated with chronic bleeding, resulting in iron deficiency anemia. A bolus obstruction may develop due to the narrowing of the upper edge of the hernia into the so-called Schatzki ring (‘Steakhouse syndrome’). 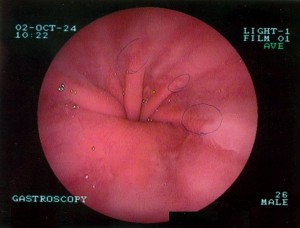 The sliding hernia involves a cranial shift of the Z-line above the diaphragm as a result of intrathoracic relocation of the cardia. If the diaphragmatic esophageal passage is less than 3 cm distal to the Z-line, it is known as a small hernia. In contrast, a large hernia is characterized by a passage that is larger than 3 cm from the esophageal hiatus to the Z-line. Since the gastroesophageal junction is reduced in the paraesophageal hernia, a definitive diagnosis based on the Z-line alone cannot be established endoscopically. 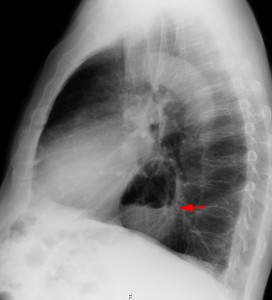 Image: Hiatus hernia in lateral radiograph of the thorax. Arrow points at the air-liquid-mirror. By Hellerhoff, License: CC BY-SA 3.0

A chest X-ray can reveal a possible mirror image of the herniated stomach, which is then projected into the thorax and substantiated, based on distinct findings.

The patient is placed in a head-down position and asked to exert the abdominal prelum to induce herniation and display optimal constrictions and bottlenecks as well as intrathoracic shift of the cardia.

Axial hernias are treated symptomatically with proton pump inhibitors in the presence of existing reflux disease. Surgical treatment is indicated only in cases of therapeutic resistance.

Paraesophageal hernias and mixed hernias, however, are always considered a surgical indication, due to the risk of incarceration. The treatment, known as gastropexy, entails repositioning of the stomach, which is fixed to the anterior abdominal wall. Most cases involve fundoplication, in which a fundic wrap sewn around the cardia serves as a novel, mechanical reflux barrier. As part of hiatoplasty, the diaphragmatic strands are fixed posterior to the esophagus via sutures to narrow the hernia.