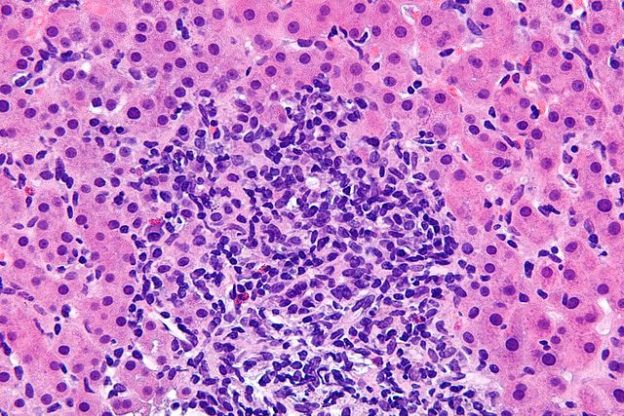 Autoimmune hepatitis is a form of chronic hepatitis. It is autoimmune in origin and characterized by the presence of circulating autoantibodies and high serum globulin concentrations. It causes non-specific histological findings as seen by light microscopy, making the detection of auto-antibodies the mainstay for the diagnosis.

There are two types of autoimmune hepatitis based on the antibodies found in each.

It is the most common type. In autoimmune hepatitis type 1,  the following antibodies are present:

Autoimmune hepatitis has an annual incidence of approximately 2 and a mean prevalence of 18 per 100,000 population in Western Europe. It is common in middle-aged persons in their 40s and 50s, although it can occur at any age. Females are 3-4 times more affected than males.

The underlying etiology of autoimmune hepatitis is unknown. However, it has been proposed that in a genetically predisposed patient, an environmental agent, perhaps a virus, causes a sequence of T-cell mediated events against liver antigens producing a progressive necroinflammatory process which results in fibrosis and cirrhosis.
In vitro observations have shown that there is a defect of suppressor T-cells which may be primary or secondary. However, no clear mechanism causing the inflammation has been found.

The clinical presentation of autoimmune hepatitis varies considerably. Affected persons may be asymptomatic or may present with acute hepatitis or features of chronic hepatitis.
In the old age group, the disease is usually discovered by abnormalities in liver function tests, or by the manifestation of signs of chronic liver disease on routine examination.
In young patients, autoimmune hepatitis, often type II, presents as acute hepatitis with jaundice and greatly elevated aminotransferase levels that do not improve with time. This age bracket may also present with features of cirrhosis with:

Sometimes a patient with autoimmune hepatitis can present with other features of an autoimmune disease. These include:

Other autoimmune diseases may also be present with autoimmune hepatitis. These include:

In addition, the polyglandular autoimmune syndrome can occur in children with type 2 autoimmune hepatitis.

Autoimmune hepatitis is characterized histologically by the following non-specific findings:

Primary sclerosing cholangitis is thought to be an autoimmune disorder in which there is extensive fibrosis of the intrahepatic and extrahepatic bile ducts.
To differentiate it from autoimmune hepatitis, a liver biopsy should be performed which commonly would show features involving bile duct paucity, inflammation or periductular fibrosis that are not seen in autoimmune hepatitis. However, sometimes both disorders are indistinguishable on a liver biopsy.

Non-alcoholic steatohepatitis is a disorder in which fatty infiltration of the liver occurs leading to inflammation and fibrosis of the liver.

Diagnosing autoimmune hepatitis in patients with underlying non-alcoholic steatohepatitis may be difficult, especially in the presence of positive ANA. However, in addition to clinical features, the amount of fatty infiltration, presence of polymorphonuclear leukocytes and central fibrosis in the biopsy may point towards non-alcoholic steatohepatitis.

There is also a form of hepatitis that occurs in systemic lupus erythematosus which is different from autoimmune hepatitis. The pathogenesis of that is related to the presence of anti-ribosomal P protein antibodies.

The drugs responsible for liver injury are over 1000 medications and herbal products, the most commonly reported in the United Stated being acetaminophen, followed by antibiotics in which amoxicillin-clavulanate is the most common.

Wilson disease is a disorder of copper metabolism (defective hepatocyte transport of copper into bile and defective incorporation of copper into ceruloplasmin which is the binding protein of copper in blood) leading to copper accumulation and damage to the liver and other organs.
It usually presents in late childhood and can mimic autoimmune hepatitis in the form of chronic hepatitis or fatty liver disease (a benign condition in which the liver functions normally and looks normal under the microscope except for the accumulations of fat within hepatocytes).

Sometimes a raised serum ferritin and increased transferrin saturation is seen in autoimmune hepatitis or chronic viral hepatitis.
Significant iron overload in hereditary hemochromatosis (autosomal recessive disorder resulting in unrestricted reabsorption of iron from the small intestine) can be excluded in this setting by the measurement of hepatic iron concentration and HFE gene testing for the C282Y mutation.

Treatment may not be required in asymptomatic patients with normal or near to normal aminotransferase levels and gamma globulin levels and who have minimal necro-inflammatory activity on liver biopsy since such patients are at a relatively low risk of disease progression.
If indicated, immunosuppression is the mainstay of treatment that includes:

Steroid and azathioprine therapy induces remission in over 80% of cases. This response forms part of the diagnostic criteria for autoimmune hepatitis.
Treatment is lifelong in most cases. Those with initial cirrhosis are more likely to relapse following treatment withdrawal and require indefinite therapy.
Liver transplantation is performed if treatment fails, although the disease may recur.

Every chronic hepatitis, including autoimmune hepatitis, predisposes the patient to the complications of portal hypertension, ascites, variceal bleeding, hepatic encephalopathy, and also increases the risk of hepatocellular carcinoma but the risk is less as compared to chronic viral hepatitis.

Occasionally, the patients with autoimmune hepatitis may acquire other viral infections, for instance, hepatitis A, B or C. These patients have a more aggressive clinical course and are more difficult to treat since the immunosuppressive therapy for autoimmune hepatitis paradoxically increases the viral replication and liver damage.