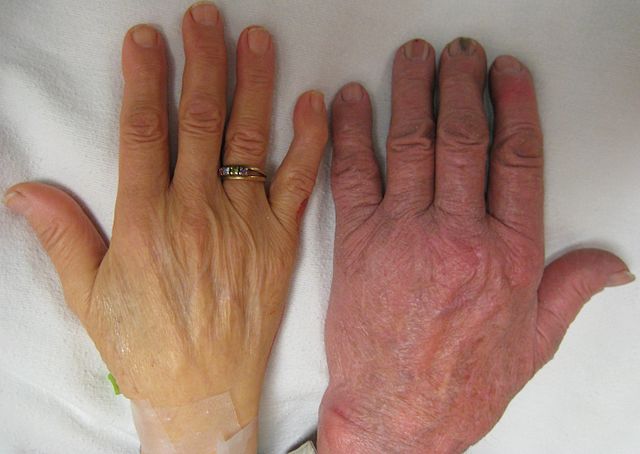 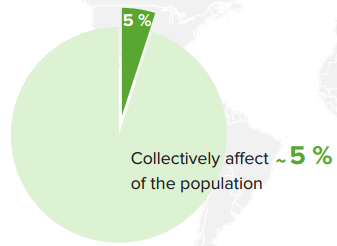 Autoimmune diseases affect approximately 5% of the population (see image). Many factors are implicated in the development of these diseases, including environmental factors such as diet and lifestyle, as well as physiologic and emotional stress (see image).

Image: The development of autoimmune diseases.

In a healthy individual, the immune system keeps autoimmune diseases at bay through its non-reactivity to self-antigens. This physiologic indifference is called tolerance and is achieved through various mechanisms.

During lymphoid development, several lymphocytes are produced. However, this production is not a seamless process, as some potentially self-reacting immature lymphocytes can be produced along with viable ones. Fortunately, lymphoid organs such as the thymus (T cells) and bone marrow (B cells) are made up of self-antigens. A significant number are also transported through the blood. These antigens are helpful in determining which immature lymphocytes will not react to healthy cells within the body.

During the maturation process, developing lymphocytes react with these self-antigens, and are removed through apoptosis. This process is called negative selection.

This process is only effective if self-antigens present in all of the parts of the body are also present in the tissues involved in central tolerance. If immature lymphocytes are exposed to an insufficient amount of self-antigens, they will still attack the body once in circulation.

Although generative lymphoid tissues work to prevent the proliferation of self-reacting lymphocytes, some potentially autoimmune-disease–causing cells do escape the system and enter circulation.

However, the selection of functional lymphocytes that react only with harmful foreign pathogens does not end in the thymus and bone marrow. In peripheral tolerance, lymphocytes are continually screened for self-reactivity. This process is made possible with the help of peripheral tissues such as the lymph nodes through anergy, T-cell suppression, or deletion.

Helper T cells have the ability to block the self-reactivity of some mature T cells. This process occurs because T cells contain inhibitory receptors in their surfaces that are responsible for binding to molecules unique to self-reacting T cells. The two receptors that are understood to do this are CTLA-4 and PD-1. The latter is connected with cellular death or apoptosis.

Autoimmune Regulation in the Thymus

As noted, the thymus contains antigens that are important to the development of a functional repertoire of self-antigen–indifferent T cells. These molecules are similar to the ones found in peripheral tissues and sometimes come from the organ of origin, via the blood. In addition, the thymus also produces antigens that mimic those found in the periphery. This is made possible by the autoimmune regulator gene. Production occurs mainly in the medullary epithelial cells of the thymus (see image). 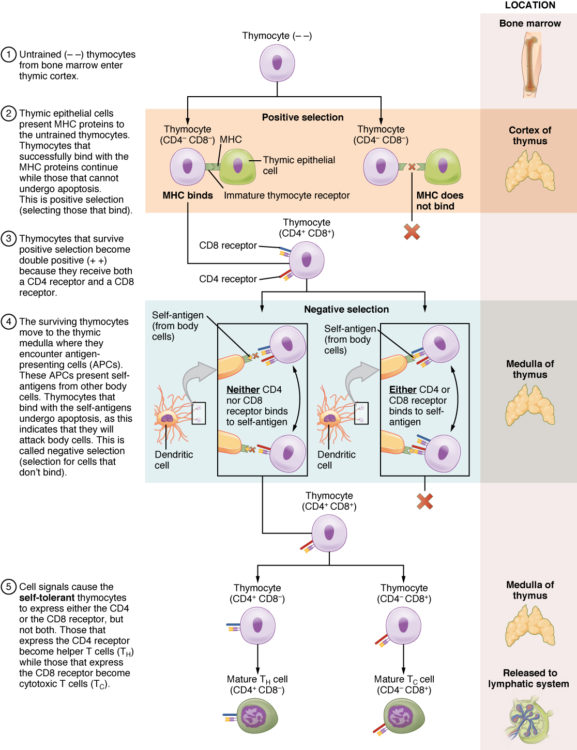 Image: Thymocytes enter the thymus and go through a series of developmental stages that ensure both function and tolerance before they leave and become functional components of the adaptive immune response. By: Heather Ketchum, Eric Bright, cnx.org, License: CC BY 4.0

Many studies have proven that genetic polymorphisms are commonly involved in the development of autoimmune diseases. Afflicted individuals are found to have inherited multiple alleles that make them susceptible to autoimmunity (see table below). This genetic component works in tandem with environmental factors to bring about certain manifestations of autoimmunity.

Major histocompatibility complexes or MHCs are surface proteins found on lymphocytes that are important in determining whether a substance is foreign or not. They are encoded by the human leukocyte antigen or HLA gene.

MHCs are the most established genetic risk factor for developing an autoimmune disease. Susceptible individuals have an increased amount of polymorphisms in the HLA allele (see table below). This finding speeds up the screening and diagnosis of some autoimmune diseases through serologic testing techniques.

Although many studies have established the link between HLA gene polymorphisms and autoimmune diseases, it is worth noting that even healthy individuals may have these. It is therefore clear that HLA polymorphisms must interact with environmental factors to create autoimmunity in an individual.

Not all people afflicted with an autoimmune disease have higher counts of HLA polymorphisms compared with healthy individuals. This is because variants in the gene coding for phenotypes that might work along with other risk factors come into play. These alleles are usually involved in the regulation of lymphocyte production, differentiation, and maturation.

Although somewhat rare compared with polymorphisms, single-gene abnormalities can be pervasive and readily manifest in individuals carrying the mutations. Most of the time, however, these mutations affect the mechanisms involved in tolerance and lymphocyte regulation. These Mendelian abnormalities can cause alterations in central tolerance, production of regulatory T helper lymphocytes, anergy, and aid in the peripheral deletion of autoimmune B and T lymphocytes.

Autoimmunity can take various forms in various locations in the body. It manifests in blood components (red blood cells and platelets), the kidney and lungs, endocrine glands, muscles, connective tissues, nervous system, and the gastrointestinal tract, among other areas.

Numerous cases of various autoimmune diseases have been documented. They may present as a single complication or as a syndrome (see table below).

A rare autoimmune disease, Goodpasture’s syndrome, involves both the lungs and the kidneys. This disease is characterized by the destruction of the type IV collagen found in the basement membrane of the renal glomeruli and pulmonary alveoli, which rapidly causes inflammation to occur in these structures (see image). It manifests as rapidly progressive glomerulonephritis and necrotizing hemorrhagic interstitial pneumonitis. Unlike most autoimmune diseases, Goodpasture’s syndrome is more common among younger individuals (adolescents or those in their 20s) and is more common in men. It is also known as anti-glomerular basement membrane disease.

Autoantibodies that target the basement membrane of glomeruli damage the glomeruli. These antibodies have a high preponderance in the non-collagenous domain of the α3 chain of the type IV collagen, known as  Goodpasture’s antigen. This collagen is required for the maintenance of the glomerular structure.

The antibodies that destroy the glomeruli can cross-react with the basement membranes of other organs in the body. When this happens, pneumonitis occurs. Since the structure of the alveoli is destroyed by these same antibodies, inflammatory processes ensue.

The genetic component of this disease is associated with some polymorphisms, particularly HLA subtypes. It is also believed that Goodpasture’s manifests after exposure to physiologic stress such as viral infections, hydrocarbon solvent inhalation, and smoking. This occurs because the antigens that trigger the basement membrane–damaging antibodies become more available to the antibodies.

Goodpasture’s syndrome can be exhibited through both pulmonary and renal signs and symptoms. During the disease’s process, patients may exhibit the following manifestations:

The approach to the treatment of autoimmune diseases is very diverse. Since immunological issues vary widely and can affect various parts of the body, drugs and other treatment modalities have been developed in order to come up with a selection of highly specific treatment choices that can be customized for the needs of each patient.

These treatment modalities have also greatly improved the prognosis of these once-fatal diseases. For example, plasmapheresis is often used to treat Goodpasture’s syndrome. This technology involves the removal of circulating antibodies and other mediators in the plasma, thereby keeping the exaggerated immune component of the blood from destroying both the lungs and the kidneys. Immunosuppressive medications that are given in conjunction with plasmapheresis can also greatly halt the development of complications caused by Goodpasture’s syndrome. This combination can also be used to treat other autoimmune disorders.

Deciding which treatment modality to use among the hundreds that are available necessitates a deeper understanding of the particular autoimmune disorder’s disease progression. This will ensure a safe and efficient curative and rehabilitative period.

Other therapeutic approaches to autoimmune diseases include the following: