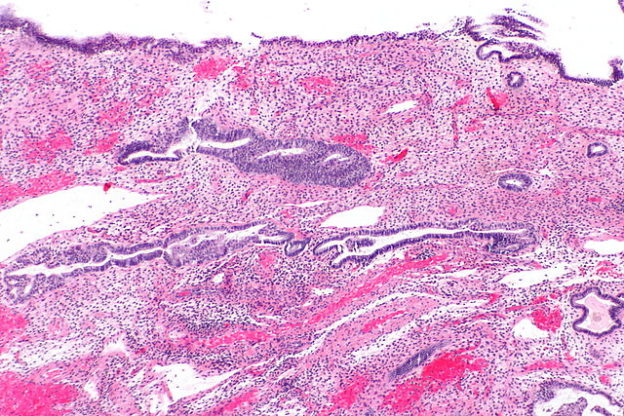 Abnormal uterine bleeding is a common diagnosis. About 20% of females have excessive menstrual blood loss. These menstrual disorders have increasingly become relevant given increases in the prevalence of female reproductive cycle with late conception, fewer conceptions, shortened breastfeeding, and increased rates of sterilization.

DUB is a diagnosis of exclusion once all primary etiologies are ruled out.

DUB as terminology is abandoned in this classification.

Frequently associated with abnormal uterine bleeding, endometrial polyps (EPs) are characterized by benign finger-like projections of the endometrium. These are usually encountered in females younger than 40 years. 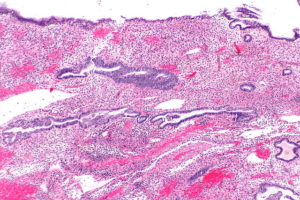 Accounting for about 25% of abnormal uterine bleeding, EPs occur in about 10% of women in reproductive age.

Also known as uterine polyps, they may be sessile or pedunculated. The latter is more common. The most frequent anatomical location is the uterine fundus.

Morphological classification of endometrial polyps segregates them into following types:

Hyperplastic EP: Originates from the basal endometrium layer which response only to estrogen stimulation.

Functional EP: Glandular component responds to cyclic hormonal changes of the menstrual period and resembles the surrounding endometrium. This is also the fundamental reason behind the difficulty in the diagnosis of these EPs by curettage secondary to tissue fragmentation during the same.

Atrophic EP: Demonstrable post-menopausal period with the fibrotic transition of the stroma. Fibrosis culminates in incomplete removal by curettage.

The use of levonorgestrel IUD (Intrauterine device) potentially ameliorates the risk of EP.

Menstrual disorders are seen in 82% of premenopausal women. Postmenopausal uterine bleeding is seen in postmenopausal women. EPs protruding through the cervix can cause dysmenorrhea. EPs remain asymptomatic in a small group of patients. The following table gives a rough estimate of the varied presentation forms of EP:

Multiple EPs are encountered in about 26 % of postmenopausal and 15 % of premenopausal patients.

While the more common pedunculated polyps are connected to a pedicle, sessile polyps have a flushed attachment to the basal stroma.

Dilatation and curettage have been the standard diagnostic methodology for EPs for many years. However, it has limitations.

Evidence suggests hysteroscopy to be the optimal diagnostic tool for examination of the uterine cavity and subsequent focused treatment of EP. Transvaginal ultrasonography forms sufficient preliminary investigations for the diagnosis of EP. The administration of intrauterine contrast elevates the sensitivity of the test.

Hysteroscopic polypectomy is considered the gold standard in the treatment of EP. It is now deemed essential to remove the endometrial basalis around the origin of EP to avoid recurrence.

Various treatment options can be compared as follows:

Small EPs managed conservatively are known to undergo spontaneous regression. Most EPs have an unremarkable inconsequential course. Notwithstanding, the benign nature of the majority of endometrial polyps, about 0.5 % of polyps are proved to harbor malignant adenocarcinoma cells.

Evidence for the role of endometrial polyps in infertility and improvement after treatment of EP is equivocal.

Leiomyoma stands for smooth muscle tumor. The most common locations for the origin of leiomyomas are uterus, esophagus, or small intestine. 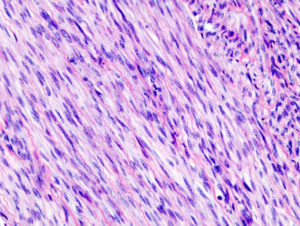 Leiomyomas are typically benign. Leiomyomas are also known as fibroid or myoma. As a paradox to their benign nature, leiomyomas are the most common tumor in women of reproductive age. As such, they can be particularly distressing.

Leiomyomas are the most common tumor in women with a prevalence of 1 in every 4–5. The highest incidence is in the 5th decade of life.

Types 0–2 are submucosal, while 2–5 are also termed as hybrid leiomyomas.

Following symptoms are commonly witnessed in patients with leiomyomas:

Leiomyomas are estrogen-responsive neoplasms. In concert with estrogen levels, they increase during pregnancy and often regress after menopause. Chromosome 12 abnormalities are implicated in the majority of leiomyomas.

Leiomyomas on gross examination appear to be grayish-white, well defined, circumscribed, multi-nodular masses protruding into the endometrial cavity and compressing the same. The cut surface has a whorled appearance due to intersecting muscle fibers and white fibrous tissue.

Hemorrhage, cystic degeneration, and calcification can often be appreciated. Often resembling the normal myometrium, the tumor cells are spindle-shaped, elongated with a cigar-shaped nucleus.

Leiomyomas are diagnosed with pelvic ultrasonography. Doppler studies may be indicated to assess the vascularity of the tumor. Some advocate biopsy to establish the tissue diagnosis.

Various treatment modalities are available and the rationale for the specific use of each of them can be summarized as follows: 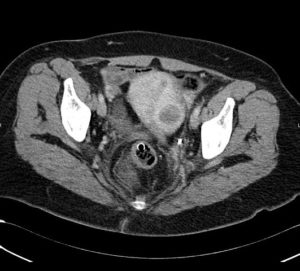 Leiomyosarcomas are malignant smooth muscle cell sarcomas. They are most prevalent in the uterus, stomach, small bowel, and are also encountered in the retroperitoneum. 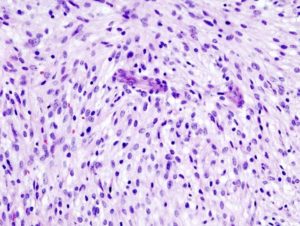 Leiomyosarcomas comprise 2–5 % of all uterine malignancies. These malignant smooth muscle cell sarcomas with frank invasion into the uterine wall have the highest prevalence in peri-menopausal women, from 40–60 years of age.

Prior pelvic radiation is a proven risk factor. Evidence against the use of tamoxifen as a risk factor is inconclusive. Similarly, parity and time of menarche and menopause as contributory factors have equivocal evidence.

Earlier presumptions about the malignant transformation of leiomyoma to leiomyosarcoma have almost been demolished. Being the most common of uterine sarcomas, the majority of the leiomyosarcomas originate de novo.

Leiomyosarcomas on gross examination are usually fleshy with hemorrhage and necrosis. On microscopic examination, the presence of atypical cells, pleomorphism, frequent mitoses, and coagulative necrosis distinguishes them from the benign leiomyomas.

Vaginal bleeding is the most common presentation.

No imaging study, unfortunately, is sensitive and specific enough to distinguish leiomyosarcoma from benign leiomyomas. Histologic examination of the entire uterus is definitive.

Based on FIGO staging, simplified staging for leiomyosarcoma is as follows:

Radical generous surgical extirpation when feasible is the only practical treatment that is potentially curing if managed when the sarcoma is small and confined to the uterus.

Leiomyosarcoma is traditionally not chemo- and radiosensitive and hence the use of adjuvant therapy is rather experimental. There is naive evidence that adjuvant radiation leads to 62 % 5-year survival as compared to 46 % with surgery alone.

Doxorubicin holds a promising future in the treatment of advanced leiomyosarcoma.

The presence of hormone receptors has led to a hormone therapy trial in leiomyosarcoma. It is rather unfortunate that the sole presence of the receptors alone does not proportionately predict hormone responsiveness.

The overall prognosis of leiomyosarcoma is rather dismal. While the 5-year survival of stage I disease barely reaches 50 %, the cumulative 5-year survival for the other stages is abysmally low, about 20 %.

Leiomyosarcomas are greater than 5 cm (1.9 in) in women more than 50 years of age have a consistently poor outcome.

Endometrial polyps are benign finger-like projections of the endometrium which often lead to menstrual disturbances. Hysteroscopic polypectomy is the gold standard treatment.

Leiomyomas are benign smooth muscle cell neoplasms with origin usually in the uterine myometrium. Patients with leiomyomas present with abnormal bleeding, infertility, dysmenorrhea, and urinary disturbances. While surgical excision is the definitive treatment, the medical line of management exists to ameliorate the symptoms.