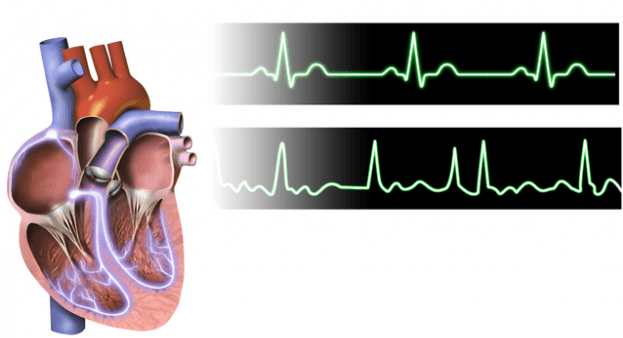 Atrial fibrillation: a form of tachyarrhythmia

AF is a very common and often chronic supraventricular tachyarrhythmia. It is characterized by irregular QRS complexes and a loss of synchronous atrial contraction.

Atrial fibrillation is a widespread disease

AF is a widespread disease, with approximately 1–2% of the general population experiencing at least 1 episode. It is the most common type of cardiac arrhythmia. The incidence of AF increases with age: up to 10% of the population over the age of 70 suffers from this disease. Men are affected more often than women.

A distinction is made between primary (idiopathic) and secondary AF. Idiopathic AF describes AF in individuals without any other cardiac diseases and accounts for about 15–30% of AF cases.

Secondary AF is caused by an underlying disease that may be cardiac or noncardiac in nature. The most frequent cardiac cause of AF is a mitral valve defect. Other possible cardiac causes include advanced cardiac insufficiency, coronary heart disease, or myocardial infarction.

Among the noncardiac causes of AF are arterial hypertension, hyperthyroidism, or the ingestion of toxic substances such as alcohol, thyroxine, triptans, theophylline, or sildenafil. An acute AF that occurs in an otherwise healthy person after excessive consumption of alcohol is also called holiday heart syndrome.

Pathology and Pathophysiology of Atrial Fibrillation

Atrial fibrillation due to a reentrant atrial tachycardia

The arrhythmia of AF is caused by a reentrant tachycardia of the atria, mostly around the pulmonary veins. This means that the electrical impulses do not propagate in a normal physiological manner—i.e. starting at the sinus node, moving through the atria, and into the ventricles. Rather, they repetitively move in a circular path inside the atria, which continuously depolarizes the atrial myocardium. This results in an atrial frequency of 350–600/min.

Because the myocardium is contracting in an asynchronous manner, the atria can no longer effectively fulfill their pumping function. This reduces cardiac output by 15% in healthy individuals, with an even higher percentage in patients with a pre-existing cardiac insufficiency. Because the AV node acts as a kind of blocker, not every excitation of the atria is conducted to the ventricles. The transmitted, often irregular, ventricular frequency ranges mostly from 100–160/min.

With regard to the progression of the disease, the following forms of AF can be distinguished, each of which manifests with different symptoms:

For many patients with persistent or permanent AF, the disease often remains asymptomatic as the reduced cardiac output can be easily compensated as long as there is no unusual strain.

However, in cases of increasing cardiac insufficiency, physical strains, or paroxysmal atrial fibrillation, symptoms are more likely to manifest. These include tachycardia with palpitations, syncope, dizziness, irregular heartbeat, and exertional dyspnea. In addition, patients who do not know what is causing their condition also might react with panic. Another very characteristic symptom of supraventricular arrhythmias is polyuria (excessive urination), which can be explained by the increased production of ANP.

For many patients with persistent or permanent AF, the disease often remains asymptomatic, as the reduced cardiac output can be easily compensated for as long as there is no unusual strain.

However, in cases of increasing cardiac insufficiency, physical strains, or paroxysmal AF, symptoms are more likely to manifest. These include tachycardia with palpitations, syncope, dizziness, irregular heartbeat, and exertional dyspnea. In addition, patients who do not know what is causing their condition sometimes react with panic. Another characteristic symptom of supraventricular arrhythmias is polyuria (excessive urination), which can be explained by the increased production of ANP.

Another crucial complication associated with AF is the risk of thromboembolic events. This risk can be quantified using the CHA2DS2-VASc score. (Previous stroke and age ≥ 75 have a double weight, indicated in the acronym as 2.)

Note: The risk factors ‘previous stroke’ and ‘age ≥ 75’ have double weight, which is indicated in the acronym as a subscript 2.

During the diagnostic process, the first indication of AF usually arises from a history of repeated palpitations or episodes of tachycardia. In these cases, it is important to inquire about duration, frequency, and triggering factors of the AF. As well, underlying diseases such as hyperthyroidism may indicate the presence of secondary AF.

Clinical examination may be notable for an irregular heartbeat, variable intensity of the first heart sound, and a difference between the auscultated heart rate and the palpable peripheral pulse (pulse deficit). However, unremarkable findings do not rule out the presence of AF.

The most important diagnostic test confirming a suspected AF is an electrocardiogram (ECG). AF can also be a coincidental finding during a routine ECG. The first criterion would be no discernible P waves as there is no synchronous atrial excitation. ECG often shows irregular R-R intervals due to irregular conduction in the AV node.

Depending on the ventricular frequency, a further distinction in tachycardia (more than 100/min) and bradycardia (less than 60/min) can be made. Besides these phenomena, fibrillatory waves may be visible in lead V1, which is also caused by the asynchronous excitation. QRS complexes are typically narrow in patients with AF.

A positive ECG finding is sufficient to confirm the diagnosis. In order to detect episodes of paroxysmal AF, long-term ECG monitoring for several days with a portable ECG monitor or event recorders may be helpful. 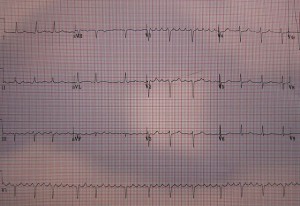 The most important differential diagnosis of AF is atrial flutter; both types of arrhythmia show very similar symptoms. A typical sign in the ECG of atrial flutter is flutter waves, caused by a macro-reentrant circuit in the atria. They have the form of a saw-tooth pattern.

When the ECG shows a ventricular arrhythmia, the possibility of ventricular extrasystoles should be considered.

The first goal in treating AF is to identify any causal factors that may trigger the arrhythmia and then treat these. If there is no specific event or underlying disease, then there are two basic approaches to treatment: rhythm control for restoring the sinus rhythm and rate control for reducing the heart rate to a normal level. This kind of treatment is supplemented with effective prevention of thromboembolism. 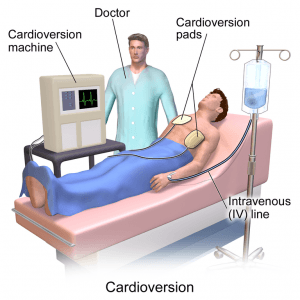 First-time AF is usually treated by trying to control the sinus rhythm. Restoring AF to regular sinus rhythm is called cardioversion. Regarding long-term benefits, rhythm control can yield similar results to rate control; however, there are some requirements to be met. Rhythm control is a suitable treatment for patients who have only recently started to exhibit AF (within the last 12 months) and do not have severe or advanced heart disease.

If AF has persisted for more than 48 hours, it is crucial to rule out the possibility of a thrombus before cardioversion is performed, as this could lead to an embolism when the atria start contracting again. Excluding a thrombus is done by echocardiography; if the result is positive, the patient has to be administered anticoagulation medication for a sufficient amount of time in order to assure a reliable anticoagulation.

Rhythm control procedures include either chemical or electrical cardioversion. Chemical cardioversion is used for patients without any cardiac disorders and involves the administration of drugs, mostly class Ic antiarrhythmic agents such as flecainide. If a patient has any known pre-existing cardiac conditions, the more effective amiodarone can be administered, although it carries a greater risk of side effects. For this reason, amiodarone should only be administered to patients in the hospital.

If a patient does not respond to medication or if there is the risk of cardiogenic shock, synchronized electrical cardioversion can be performed. In this procedure, low-energy shocks of 200 J are given to the sedated patient, the timing of which is controlled by an integrated ECG to ensure the optimal moment in the cardiac cycle is attained (synchronization). The rate of recurrence of electrical cardioversion is up to 75% within the first year, which is why long-term antiarrhythmics are prescribed to prevent recurrence. Other, more invasive options, especially for younger patients, are aimed at destroying the area of cardiac tissue that is causing the reentry mechanism, either by catheter ablation or surgery.

Rate control is aimed at normalizing the ventricular heart rate in cases of tachycardia or bradycardia. The tachycardia caused by AF is usually treated with beta blockers or calcium channel blockers such as verapamil. Importantly, these two substances must not be administered together, as this could cause an AV block.

Digitalis (digoxin) is sometimes given to patients with cardiac insufficiency in addition to beta blockers. However, recent studies have indicated that digitalis treatment is connected to a higher mortality rate in patients. In acute situations, drug-based rate control is also used to bridge the time until a cardioversion can be performed. Patients with bradycardia can benefit from a pacemaker, such as a VVI device.

The prevention of thromboembolism in patients with AF is of the utmost importance because of their increased risk of embolic events, especially a stroke. This risk is assessed using the European Society of Cardiology’s CHA2DS2-VASc score. In cases of non-valvular AF, a score of 0 indicates a low risk and does not necessarily require anticoagulation.

However, even with moderate risk (CHA2DS2-VASc score of 1 or more), permanent anticoagulation will have to be considered unless the risk factor is only based on female gender. With a score of 2 or more in the risk stratification, anticoagulation is imperative.

In the United States, most patients are treated with the anticoagulant warfarin (brand name Coumadin), which requires regular checks and monitoring of the target INR level of 2–3. There are also newer oral anticoagulants available that have proven to be effective. These include dabigatran, rivaroxaban, and apixaban, which each act as direct inhibitors of a specific coagulant factor.

The prognosis for AF depends largely on a patient’s underlying diseases and cardiac function. A patient’s risk for thromboembolic events also determines the course and mortality of the disease. Neither rhythm nor rate control influences the prognosis, except for patients with cardiac insufficiency, who benefit more from an ongoing rhythm control. Stroke risk can be reduced by about 60% through proper dosing of anticoagulation medications.