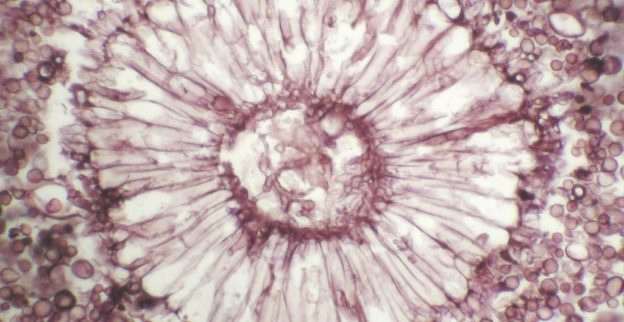 Image: “Conidial heads are usually seen only where the fungi are in contact with air such as in Aspergillomas and in tracheobronchial infection.” by Yale Rosen from USA – Aspergillus – Conidial head Uploaded by CFCF. License: CC BY-SA 2.0

Humans inhale thousands of spores daily, but do not develop the disease due to a competent immune system. Aspergillus grows on plants, soil, household dust, and food items. There are about 180 different species of the fungus, 40 of which can cause disease in humans according to the CDC.

Aspergillus species especially grow where sugar and salt are abundant and are highly aerobic, growing where oxygen concentration is high. Aspergillus also grow on carbon-rich substrates such as monosaccharides and disaccharides and grow on starch-rich food such as bread and potatoes. Notably, some species exhibit oligotrophy, growing in environments without nutrition.

Aspergillosis is not reported in the United States, making it difficult to determine the exact number of cases. The disease likely affects 15% of patients with cystic fibrosis and 2.5% of those with asthma.

Transmission of aspergillus occurs through inhalation of conidia (the spore form) in the air, showering in contaminated water containing conidia, or nosocomial infection (through hospital bed sheets and fabrics); person–to–person transmission is rare.

If aspergillosis becomes invasive, it may cause the patient to cough-up blood, experience fever, chest pain, and difficulty breathing. Aspergillosis may also cause wheezing, fatigue, and weight loss. Aspergillus can appear as a mass, known as a fungus ball, when observed under x-ray and cause disseminated infection leading to end-organ failures, such as kidney and liver failure.

Allergic bronchopulmonary aspergillosis is caused by an allergic reaction to aspergillus, resulting in inflammation in the lungs. The symptoms are usually rusty or brown colored sputum, shortness of breath, and in rare cases, fever.

Aspergillosis may cause itching and fluid discharge leading to overnight pillow staining as well as pain. Due to debris accumulation in the external auditory meatus, aspergillosis can cause a feeling of blockage of the ear. There is markedly higher itching and discharge compared to bacterial ear infection and may present with a red lining of the epidermis and tympanic cavity. Aspergillus can cause perforation, also known as a ruptured eardrum. There may also be a greenish or black fuzzy growth on the debris in the ear canal. Blockage of the ear canal may cause mild conductive deafness. In diabetic patients, Aspergillus may even erode the adjacent bones, such as the mastoid bone, and can even disseminate into the brain.

Aspergillus sinusitis may cause congestion, runny or stuffy nose, decreased sense of smell, and sometimes headache.

For less severe and non-invasive forms of aspergillosis, oral steroids are given for 7–8 months along with itraconazole which increases the efficacy of steroids allowing less dose to be administered.

For invasive bronchopulmonary aspergillosis, voriconazole, and amphotericin B can be given. In some cases, surgical debridement and removal of aspergillomas are recommended.

For ear infections, drying and careful removal of the debris is done. Flucytosine (10%), clotrimazole cream, and econazole cream (1%) are also suggested treatments for an ear infection.

Posaconazole is used prophylactically in immunocompromised patients. Infection control and reduction of exposure and treatment of the infected person is ultimately the most effective way to prevent Aspergillosis.