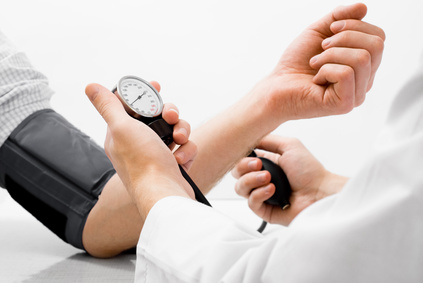 Hypertension relates to a blood pressure which is higher than the following limits:

Approximately a quarter of the world’s population suffers from arterial hypertension, and about half of all the individuals afflicted are not aware of their condition.

In more than 50% of the patients who are aware of their hypertension, the disease is not managed at all or only treated inadequately.

The prevalence of arterial hypertension increases with age and body weight. The disease affects men more frequently than women. Post-menopausal women, however, are generally affected as well.

Based on the etiology of this disease, arterial hypertension is divided into primary and secondary hypertension.

The majority of individuals with hypertension (> 90%) suffer from primary hypertension, which is idiopathic, which means that the diagnosis is based on the principle of exclusion.

The risk factors associated with primary hypertension that usually occur in individuals over the age of 30 years include: 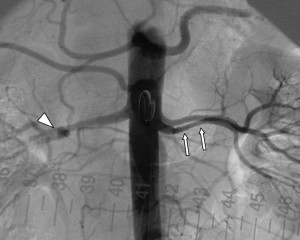 Secondary hypertension is triggered by other diseases, such as sleep apnea syndrome, aortic isthmus stenosis, and atherosclerosis. Neurogenic, psychogenic, and iatrogenic forms of the disease are also known. Iatrogenic factors include, among others, ovulation inhibitors and NSAR drugs. Exposure to drugs and toxins, such as excessive licorice consumption, may also induce secondary hypertension.

Another type of arterial hypertension is the hypertensive disease of pregnancy. Among the risk factors for pregnancy-related hypertension include increasing maternal age and multi-fetal pregnancies.

Hypertensive disorders of pregnancy include a variety of diseases occurring in pregnancy, such as:

Hypertension is divided into several stages. An increase in blood pressure as a result of physical exertion does not count as hypertension.

Disproportional increase in blood pressure with little exertion is referred to as unstable hypertension.

Life-threatening form of arterial hypertension is accompanied by diastolic blood pressure above 120 mmHg that drops less than 10% overnight and is referred to as malignant hypertension.

The following table provides an overview of the different stages of hypertension according to the WHO classification:

Arterial hypertension develops due to a disturbance of the regulatory mechanism that usually maintains blood pressure constant. The disturbances include increased peripheral resistance, an increase in cardiac output, or a combination of both.

During the progression of the disease, several compensatory mechanisms occur, consistently maintaining the blood pressure at an elevated level. In order to maintain cardiac output, cardiac hypertrophy occurs which helps to permanently withstand the increased pressure. The resistant vessels hypertrophy as well. The baroreceptor reflex that usually registers increased levels of blood pressure is shifted, allowing higher blood pressure values to be considered normal.

The kidneys play a role in this compensatory process as well. Even though renal blood flow and glomerular filtration rate are constant for the most part, an increase in sodium excretion (pressure natriuresis) accompanies the increase in blood pressure in order to counteract hypertension. The effects of renin release as well as the changes in renal sodium reabsorption, for instance, on pressure natriuresis, are the topic of this discussion.

Symptoms of arterial hypertension frequently manifest themselves rather late.

In cases of secondary hypertension, symptoms of the individual underlying disease accompany those of hypertension.

Progression and Special Forms of Hypertension

Isolated office hypertension, also referred to as ‘white-coat hypertension’, is characterized by readings ≥ 130/80 mm Hg in the physician’s office, while measurements obtained at home and during blood pressure monitoring are normal.

Gathering a patient’s medical history is essential to determine possible symptoms and identify previous values of blood pressure measured as well as possible risk factors. It is also necessary to inquire about the patient’s current and past medications, because the use of NSAR drugs, ovulation inhibitors, and corticosteroids, for instance, may contribute to elevated blood pressure. Previous illnesses must also be investigated along with the patient’s family history.

The patient’s physical examination includes not only the measurement of blood pressure but also radial and femoral pulse recordings as well as abdominal auscultation, which may indicate renal artery stenosis.

Furthermore, it is essential to look for signs of cardiac insufficiency and renal failure. The fundus of the eye should be examined as well.

The focal point of diagnosing arterial hypertension is the non-invasive measurement of blood pressure according to Riva Rocci, who invented the cuff-based version of the mercury sphygmomanometer for blood pressure measurement. Elevated blood pressure must be established by taking at least three readings on two different days: The first readings are frequently 10% higher than subsequent readings.

In order to diagnose forms of white-coat hypertension—or to rule this form out—and to establish permanently elevated blood pressure, ambulatory blood pressure monitoring (ABPM) over a period of 24 hours is appropriate. The average daytime measurement should be below 135/85 mm Hg and the average nighttime measurement below 120/70 mmHg. The average 24-hour reading should be below 130/80 mm Hg.

Blood parameters including Hb and HcT may be used to evaluate anemia due to underlying renal disease. Renal function may be tested by measuring creatinine and eGFR levels. Potassium levels yield more information if Conn’s syndrome is suspected. Furthermore, other parameters such as cholesterol, triglycerides, and glucose indicate the risk for atherosclerosis.

In order to evaluate the presence of endocrine hypertension, parameters such as T3, T4, TSH, aldosterone, and renin may be measured.

Urinalysis is another test option because microalbuminuria may be an early indicator of renal damage, especially in diabetic patients. Determining glucose levels is necessary to rule out potential diabetes mellitus. Nitrite levels may reveal urinary tract infections, and catecholamine levels combined with severely high diastolic blood pressure (> 110 mm Hg) are indicators of pheochromocytoma.

Instrument-based diagnostics is primarily used to diagnose secondary hypertension. ECG screening can be used to rule out left ventricular damage or coronary heart disease. Chest x-rays may be used to determine the presence of any dilatation.

Echocardiography is used to determine the ventricular circumference and to exclude any abnormal or defective pump function of the heart. Carotid Doppler sonography, renal sonographies or color duplex sonographies of the renal arteries may also be an option in specific conditions.

Medications that may cause hypertension should no longer be used. In addition, dynamic conditioning training to include sports such as swimming, jogging, or bicycling should be pursued three to four times per week.

Aside from these general measures, diseases that may cause secondary hypertension must be treated. According to the European society of hypertension (ESH), the target blood pressure values in individuals under the age of 60 years (source: JNC 8) are below 130/80 mm Hg; in patients older than 60, the target values are below 150/90 mm Hg.

Pharmacological therapy may be started as monotherapy. However, if blood pressure values strongly deviate from normal values (> 140/80 mm Hg), or in cases of comorbidities, primary combination therapy should be initiated. 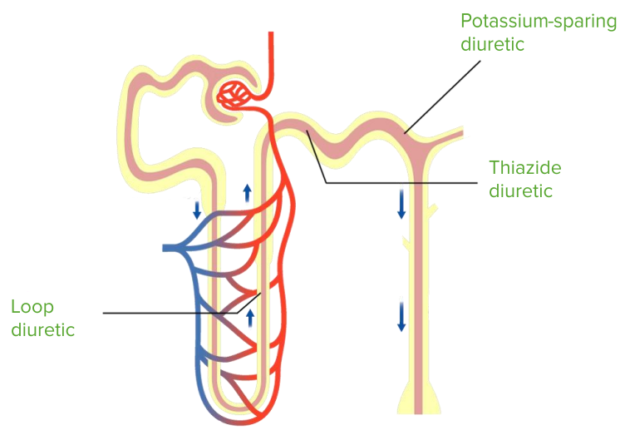 The kidney is central to blood pressure control via the juxtaglomerular apparatus. Baroreceptors in the arterial system inform the central nervous system concerning the level of blood pressure. The signals transmitted by the baroreceptors alter the activity of the autonomic nervous system. Renin initiates a biochemical sequence that eventually converts angiotensinogen produced in the liver into angiotensin, a strong vasoconstrictor. Angiotensin stimulates the release of aldosterone from the adrenal gland, which causes renal retention of salt (NaCI) and water. Angiotensin stimulates the release of antidiuretic hormone from the pituitary gland, which leads to water retention by the kidney.

This system is part of the body’s defense against dehydration and/or blood loss. The goal is to restore blood volume to normal as quickly as possible. 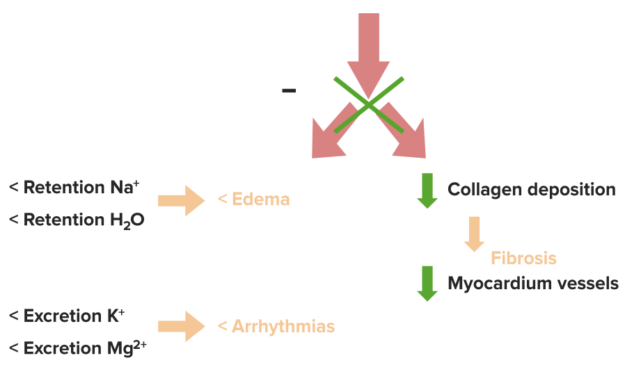 Beta-blockers slow the heart rate and block the sympathetic nerve stimulation to the kidney (< renin release) and the peripheral nerves (< vascular resistance). They are second-line agents for hypertension.

Fluid retention worsening heart failure is more likely to occur during initiation and the first several months; later, the heart failure improves. Other adverse events are daily weight gains requiring careful adjustment of diuretics. Hypotension is more likely with carvedilol. The risk of bradycardia and heart block is 5—10% as the dose is increased. Fatigue and weakness may resolve with time or reduction in dose. Asthma may worsen or develop.

Other forms of pharmacological therapy

Other drugs occasionally used in the treatment of hypertension

Dual combinations may include, for instance, a diuretic along with a beta-blocker, a long-acting calcium channel blocker, ACE inhibitors, or AT1 receptor blockers.

Alternatives include the combination of a calcium channel blocker with a beta-blocker, ACE inhibitors or AT1 receptor blockers.

N.B. Calcium channel blockers of the non-dihydropyridine variety must not be administered in combination with beta-blockers as they may promote bradycardia or atrioventricular block (AV block)!

The use of individual medications is dictated by factors such as side effects, individual tolerability, and interactions with other medications already used by the patient. Triple combinations are another alternative in the event the dual combination does not have the desired efficacy. 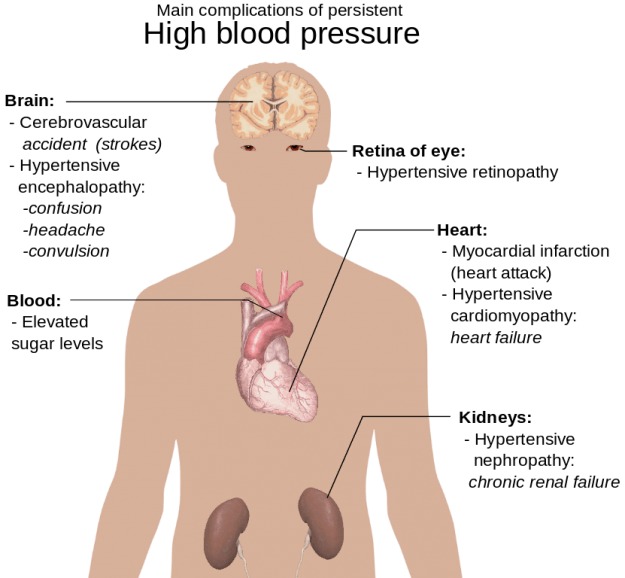 The challenge with arterial hypertension is that, most often, it is not diagnosed for a long time and is not treated at all or only to an insufficient degree. In addition, lack of patient compliance due to illness may hinder therapy, which leads to secondary diseases, frequently affecting the heart, the kidneys, the brain, and the eyes or manifestations involving the vessels of the lower extremities. These diseases frequently result from atherosclerosis involving the affected sections of vessels.

As a result of atherosclerotic changes in the coronary blood vessels, the coronary reserve is impaired to the extent that in individuals with hypertension, the increased cardiac output with effort may not be adequate. Therefore, it may frequently result in angina pectoris, myocardial infarction or sudden cardiac arrest.

Hypertensive nephropathy is accompanied by damage to the kidneys, which may lead to microalbuminuria associated with endothelial damage, similar to the damage in diabetic patients. Years of arterial hypertension may lead to pronounced nephrosclerosis with terminal kidney failure.

Arterial hypertension may result in transient ischemic attacks (TIAs) as well as cerebral infarction, hypertensive hemorrhage, or acute hypertensive encephalopathy. The risk of suffering a stroke can significantly be lowered with antihypertensive therapy.

Hypertensive retinopathy is generally attributed to extensive atherosclerosis of the vessels in the retina. Vascular diseases caused by hypertension include peripheral arterial disease, abdominal aortic aneurysm as well as aortic dissection.

Preventative approaches include the elimination of risk factors or their reduction.