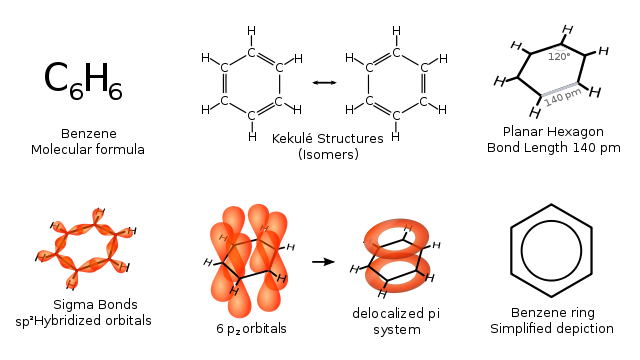 Compounds are classified as aromatic if they are able to exhibit the following properties:

The compound is considered to be aromatic if it is able to exhibit all of the properties included in the list. Otherwise, the compound can be classified as either a non-aromatic or anti-aromatic compound.

Benzene is a hydrocarbon with the molecular formula C6H6 and has a cyclic structure with alternating or conjugated double bonds. Although benzene is unsaturated, it does not exhibit the relative reactivity of its other alkene and acyclic counterparts. For example, cyclohexene readily reacts with Br2 to produce 1,2-dibromocyclohexane. Conversely, benzene reacts very slowly with Br2 to form bromobenzene which still retains the presence of three double bonds, demonstrating the relative stability of benzene.

Another important observation is the bond lengths in a benzene molecule. In ordinary compounds, single bonds are expected to be longer than double bonds. However, the bond length analysis of benzene shows that the C to C bond lengths are all equal, regardless of being a single or double bond. The bond angle in each C-C-C segment is 120°, forming a perfect hexagon shape. The electrostatic potential map shows that the electron density is identical in all six carbon-carbon bonds. Each carbon also has a p-orbital that lies perpendicular to the plane of the six-membered ring.

Because of the peculiar properties of benzene, each double bond is not considered to be localized, but rather, overlapping to only one other p-orbital. These properties are only possible if the compound has all p-orbitals equally overlapping adjacent p-orbitals. This overlap of orbitals enables delocalization of the 6 π electrons around the ring. Because of this, it is difficult to isolate the 2 possible isomers of benzene. Instead, a circle is included inside the 6 sides of the molecule to indicate delocalization of the π electrons. 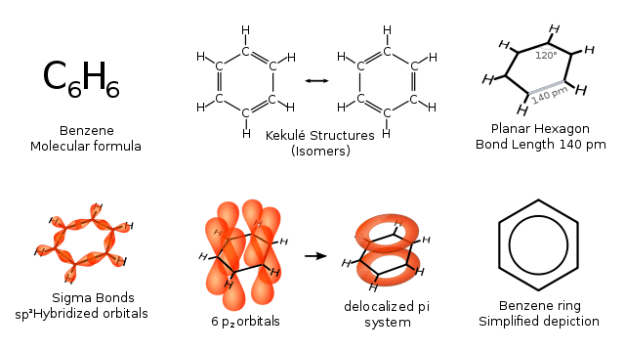 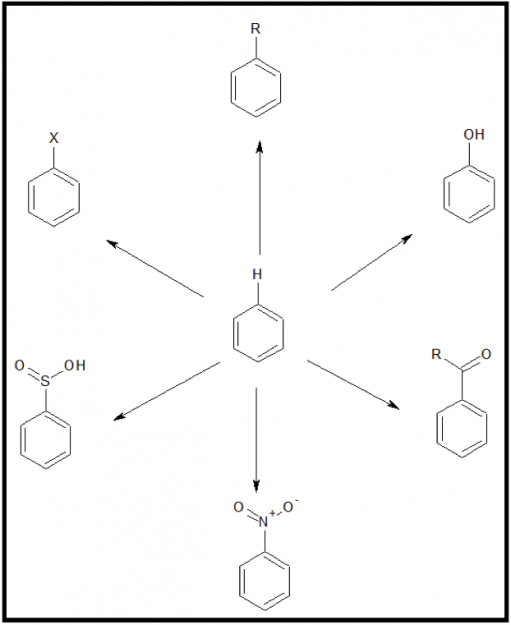 Aromatic compounds, unlike ordinary alkenes, are less reactive compared to their acyclic counterparts due to their relative stability afforded by π electron delocalization. In a halogenation reaction known as bromination, Br2 can readily react with ethane to produce dibromoethane. This is not true for benzene. For the bromination reaction to proceed in benzene, a catalyst such as FeBr3 is needed which provides a different mechanism for the reaction to proceed. 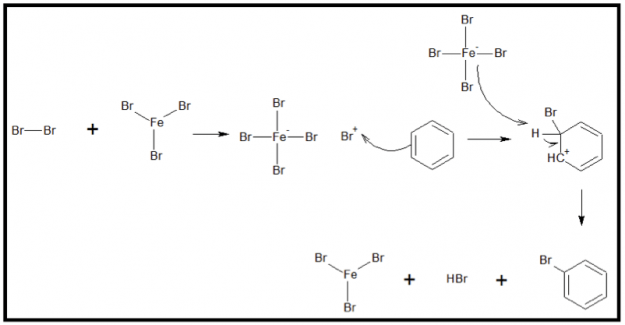 Nitration of aromatic rings can be achieved using a mixture of concentrated nitric and sulfuric acids. The electrophile in the reaction is the nitronium ion, NO2+, which is produced by the protonation and loss of water in the form of HNO3. Just as in halogenation, a carbocation intermediate is produced when the nitronium ion interacts with the benzene ring. Upon loss of a proton, the neutral substitution product nitrobenzene is produced. Below is the basic mechanism for the nitration of benzene:

An alkylation reaction proceeds when an alkylchloride is combined with AlCl3. AlCl3 enables the dissociation of R-X to produce the carbocation that will serve as the electrophile. The electrophile then attacks the benzene ring and the reaction is completed by proton loss. The mechanism of the reaction is shown below: 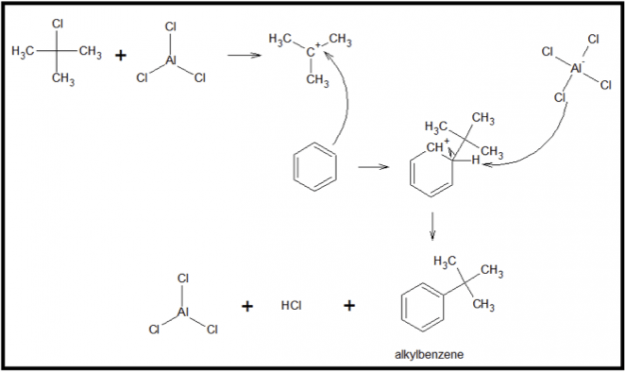 The mechanism of the acylation reaction is similar to the alkylation reaction. The alkyl halide is just replaced by an acyl halide. For example, for the acylation reaction of benzene, the first step is the generation of a strong electrophile by the interaction between the acyl chloride and the AlCl3 molecule. The acyl cation is then stabilized by rearrangement in the acyl cation with the + charge present in the C atom. The +C then interacts with the double bond in the benzene molecule, forming a carbocation that can be stabilized by abstracting one of the protons using the AlCl4– ion produced in the first step. The mechanism for acylation is shown in the figure below: 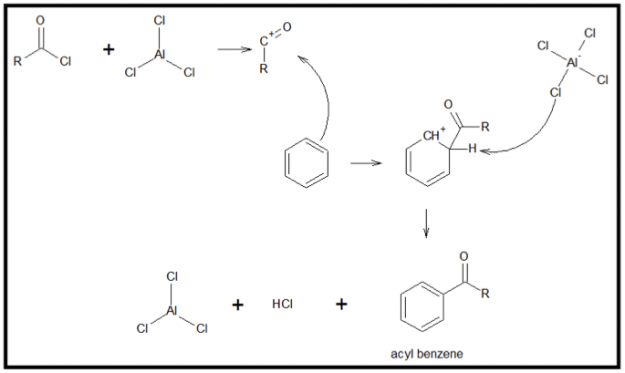