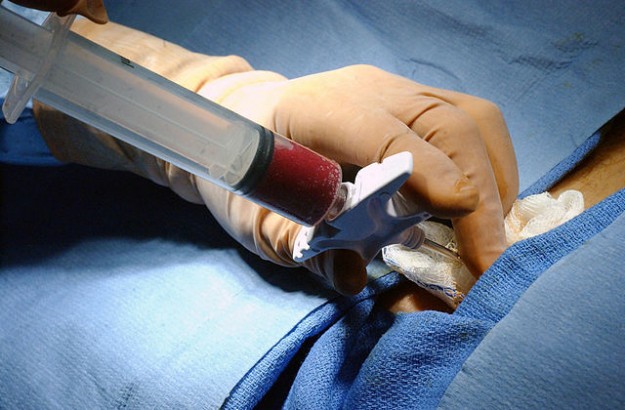 Image: “Patient with aplastic anemia” by openi. License: CC BY 4.0

Because the exact cause of aplastic anemia has not been definitively identified, approximately 50% of cases are classified as idiopathic. However, this disorder does have a direct link to a significant reduction in the number of pluripotent hematopoietic stem cells. An autoimmune reaction that affects the T cells has also been identified as a possible cause.

Aplastic anemia has both congenital (primary) and acquired (secondary) causes (see table below).

Fanconi anemia is an autosomal-recessive inheritance disorder and can be subdivided into 7 subtypes. The disease usually manifests between the ages of 5 and 10 years. Its underlying cause is thought to be a DNA repair defect. Fanconi anemia manifests in the form of microcephaly, the absence of radii or thumbs, pelvic or horseshoe kidney, hyper- or hypopigmentation of the skin, and, in rare cases, developmental delay. 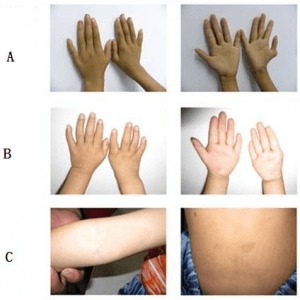 The treatment of choice for Fanconi anemia is a bone marrow transplant. Treatment with androgens is also an option; however, the side effects can be considerable (e.g., virilization, liver anomalies), and remission generally lasts only about 2 years.

Blackfan-Diamond anemia is the hereditary form of pure red cell aplasia. It involves a primary erythroid aplasia in the bone marrow that does not affect any other cell lines. Unlike other forms of aplastic anemia, it does not involve pancytopenia.

Leukocyte and thrombocyte numbers are in the normal range. However, erythroblasts in the bone marrow are markedly reduced or not present at all. Clinical manifestations can be observed in infants and present as typical symptoms of anemia. Multiple somatic dysmorphias such as genital malformations or dysphalangia can also develop.

Treatment consists of the administration of glucocorticoids and, in some cases, bone marrow transplant.

Acquired aplastic anemia usually results from direct damage to the hematopoietic bone marrow due to e.g., radiation and medication that causes cytotoxic effects. Chemical substances such as benzene can also disrupt bone marrow functioning, and viral infections can also lead to the development of this disorder.

Identifying a causative factor is not always possible, however; in some cases, there seems to be no identifiable cause.

Pure red cell aplasia is a rare syndrome that can be inherited (as in Blackfan-Diamond syndrome) or secondarily acquired. Unlike most forms of aplastic anemia, this form does not involve pancytopenia — i.e., only the number of the erythroblasts is markedly reduced. The syndrome is, therefore, an isolated aplasia of erythropoiesis.

Since the causative factor often cannot be determined, most cases are classified as idiopathic. Pure red cell aplasia can also develop, however, in patients with an autoimmune disease such as systemic lupus erythematosus (SLE).

The disorder can be treated with corticosteroids as well as with immunosuppressants, similar to the treatment used for the congenital form.

A series of cytotoxic medications are known to increase the risk of developing aplastic anemia. However, antimetabolites such as methotrexate and mitotic inhibitors such as daunorubicin only cause temporary aplasia, while alkylating agents such as busulfan cause chronic aplasia.

Non-cytotoxic medications such as chloramphenicol or gold preparations can also cause aplastic anemia. Chloramphenicol should therefore only be given in very severe cases after all other medication has failed.

Medication that can cause damage to the bone marrow includes the following:

Chemical substances that are known to cause damage to bone marrow include benzene, hair dye products, and insecticides.

Bone marrow failure can also occur after radiation therapy. Therefore, when there is suspicion of bone marrow failure, the patient’s medical history should take into account previous radiological examinations.

There is an etiological relationship between aplastic anemia and autoimmune reactions. Autoimmune diseases that cause an increased risk of developing aplastic anemia include SLE and graft versus host disease.

A number of viruses are proven to have an influence on the development of aplastic anemia, including:

Aplastic anemia can have an insidious or acute onset. The first warning signs may be neutropenia or thrombocytopenia. Other clinical signs include fatigue, exhaustion, overall weakness, pale skin, and pale mucous membranes. There is also an increased likelihood of infections, especially in the mouth and cervical areas, and increased bleeding (epistaxis, menorrhagia).

Since pancytopenia is typical of aplastic anemia, this finding should prompt (after excluding other, more probable diseases) further investigation of possible bone marrow failure. Before this occurs, however, the following diseases, which are associated with pancytopenia, should be considered during differential diagnosis:

Blood count will also show normochromic or normo- or macrocytic anemia and reticulocyte count will be reduced. Serological examinations should look for parvovirus B19, hepatitis virus, Epstein-Barr virus, and cytomegaloviruses.

Accurate identification of the cause is done by examining the bone marrow (trephine biopsy and aspiration). The cells taken from the iliac crest are examined both cytologically and histologically. The detection of hypoplasia or aplasia of the hematopoietic marrow is to be expected due to it being replaced by non-hematopoietic fatty bone marrow. The absence of precursor cells of other cell lines is also characteristic of this disorder.

When aplastic anemia is suspected, the causative factor (e.g., radiation, chemicals, medications) should first be identified. Allogeneic stem cell transplantation is the only curative treatment, however (in those aged < 40 years), because it generates completely new hematopoiesis.

During treatment, it is important that the number of transfusions be kept to a minimum before stem cell transplantation is carried out. The risk of alloimmunization rises with each subsequent transfusion and thus the chances of success decrease. Possible donors include siblings (preferred option) and, if no siblings are available, unrelated donors (in both cases, donors must have at least 10 HLA alleles to be considered a match).

If left untreated, aplastic anemia is lethal in 75% of cases.