Antipsychotics (Neuroleptics) — Classification and Side Effects 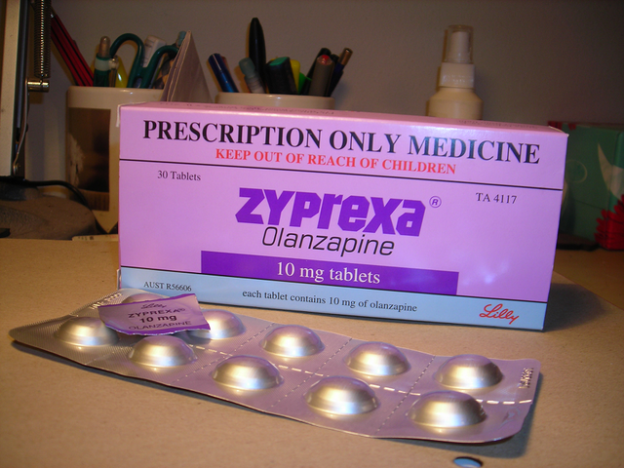 Dopamine is a monoamine neurotransmitter that is synthesized by the conversion of tyrosine to dopa, which undergoes decarboxylation and forms dopamine. The functions of dopamine depend on the pathway involved. They include:

Dopamine has been implicated in the pathogenesis of schizophrenia in what is known as the dopamine hypothesis or theory. Carlson, who was awarded a Nobel Prize in 2000, originally proposed this theory. Excess levels of dopamine have been linked to psychotic behaviors, based on pharmacological evidence and various studies involving humans and animals.

Amphetamines cause increased levels of dopamine in the brain and can result in acute psychotic episodes similar to what is seen in schizophrenia. Furthermore, drugs used in Parkinson’s disease, including levodopa and dopamine agonists, can cause hallucinations as a side effect. It is also known that amphetamine, as well as other drugs that act as dopamine agonists, worsen symptoms in patients with schizophrenia. 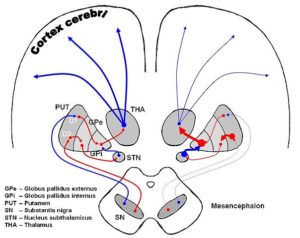 In animal studies, increased dopamine levels lead to stereotyped, repetitive behaviors, like that which sometimes occurs in schizophrenia. Animals that are administered potent D2 receptor agonists like bromocriptine also develop such behaviors.

In support of such evidence, dopamine antagonists, including antipsychotic agents, have been consistently found to be effective in treating the positive symptoms of schizophrenia. In fact, antagonist activity at the dopamine receptors is the main mechanism action of the antipsychotics in clinical use for schizophrenic patients.

There have been new findings regarding the pathogenesis of schizophrenia. Aside from the role of dopamine, it is believed that glutamate underactivity may play an important part in this condition.

Antipsychotic drugs work chiefly by blocking postsynaptic dopamine D2 receptors. Therapeutic effects are achieved when there is a blockade of at least 80 % of the D2 receptors.

While the blockade of dopamine receptors is an immediate effect of drug administration, the therapeutic effect may be delayed for up to several weeks, and the reason for this is unknown. The therapeutic effects of antipsychotic drugs include decreased dopaminergic neuronal activity and an upregulation of dopamine receptors. However, an immediate effect of antipsychotics is their sedating quality, making them useful in acute behavioral emergencies.

One of the key differences between typical and atypical antipsychotic drugs is that the newer atypical agents have a lower incidence of extrapyramidal motor side effects. This is because the newer agents have activity at other receptors. Other reasons for reduced extrapyramidal effects may include the fact that some of these drugs dissociate rapidly from the dopamine receptor, while others act as partial agonists.

Examples of typical and atypical antipsychotics

Side Effects of Antipsychotics

Antipsychotics use may cause a prolonged QT interval, which can lead to ventricular arrhythmias and sudden cardiac death.

Blockade of dopamine receptors in the tuberoinfundibular pathway results in increased prolactin secretion, as one of the functions of dopamine is to suppress prolactin. Hyperprolactinemia can lead to menstrual irregularities, breast enlargement, and galactorrhea.

The blockade of adrenergic receptors can result in orthostatic hypotension and reflex tachycardia.

The blockade of histamine receptors can result in sedation. This is an effect of certain phenothiazine antipsychotics such as chlorpromazine.

Metabolic and cardiovascular side effects

Decreased libido and erectile dysfunction may occur in men. Those conditions are a result of a combination of dopamine, adrenergic and muscarinic receptor blockade.

Other side effects include allergic reactions (e.g., urticaria), idiosyncratic reactions such as obstructive jaundice (with phenothiazines), leukopenia and agranulocytosis (higher incidence with clozapine).

A rare syndrome occurring in 1—2 % of patients. It is characterized by hyperthermia, muscle rigidity, mental confusion, and autonomic nervous system dysfunction. This syndrome is fatal in 10—20 % of the cases as it can cause renal or cardiovascular failure. Treatment is by the immediate cessation of the antipsychotic drug and administration of bromocriptine, a dopamine receptor agonist, and dantrolene, a skeletal muscle relaxant.

Drugs used in the treatment of bipolar disorder include:

Lithium or an antiepileptic drug is typically used as a mood stabilizer for the long-term treatment of bipolar disorder. They act prophylactically to prevent mood swings and therefore reduce manic and depressive episodes.

Lithium is used for the prophylactic treatment of bipolar disorder as a mood stabilizer and in the treatment of acute mania. The mechanism of action of lithium is poorly understood. It may act by interfering with the formation of inositol triphosphate and inhibiting kinases.

Lithium has a narrow therapeutic range, between 0.5—1 mmol/L. At levels above 1.5 mmol/L, it becomes toxic. Toxic effects of lithium include

Certain antiepileptic drugs may also be used as a mood stabilizer in the treatment of bipolar disorder. These include carbamazepine, lamotrigine, and sodium valproate. They are clinically effective and have a better side effect profile than lithium. The action of antiepileptic drugs in controlling bipolar disorder may be related to their anticonvulsant activity and blockade of sodium channels.

Antidepressants are to be used with caution in patients with bipolar disorder as they may induce or exacerbate mania. They may be administered in conjunction with a mood stabilizer.

Antipsychotics are used in the treatment of:

Longer-acting depot formulations of antipsychotic drugs are also available and may be used in cases of patient preference or if compliance is a problem.

It should be noted that not all patients with schizophrenia respond to therapy with antipsychotic agents. In patients who are resistant to two or more different antipsychotic agents, clozapine is recommended, given its potency. However, because of its potentially dangerous side effects, including leukopenia, agranulocytosis, and myocarditis, it is usually reserved for resistant cases.

It requires close monitoring when used, with weekly blood tests in the first 6 months of use. About 30 % of patients have treatment-resistant schizophrenia, which means that they are resistant to all available antipsychotics.

One thought on “Antipsychotics (Neuroleptics) — Classification and Side Effects”