Anti-hypertensive Medications — List of Drugs and Lines of Therapy 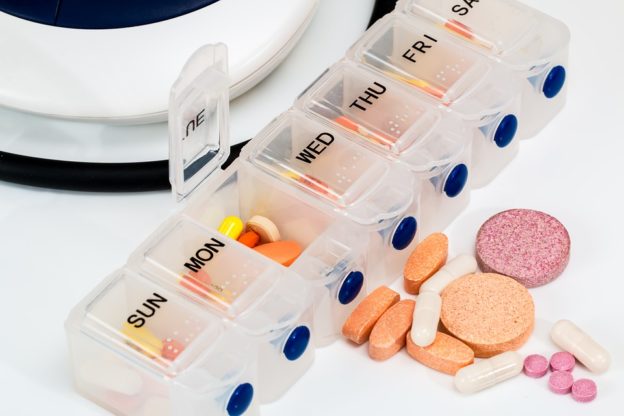 The major groups of drugs that are used in the treatment of hypertension include:

The drugs included in each group work with similar efficacy in decreasing hypertension. A meta-analysis including 31 trials with 190,606 participants with the occurrence of a major cardiovascular event as the primary outcome showed that the different classes of drugs have the same effect in both younger and older age groups.

But it is still a matter of concern that there is variability in the extent to which a decrease in blood pressure occurs between individuals receiving the same medication.

The degree of hypertension control is the major factor that determines the decrease of cardiovascular risk in patients of all age groups, and the use of various classes of medications doesn’t influence this risk.

Thiazide diuretics include the following agents:

The nephron, which is a functional unit of the kidney, is composed of two main parts: a renal corpuscle and a renal tubule. This tubule can be divided into many segments, according to its anatomical and physiological characteristics. Thiazide diuretics act at the level of the distal loop, especially by inhibiting the sodium–chloride transporter. The reabsorption of sodium is hindered, and it is lost in the urine. Initially, the loss of sodium and the consequent decrease in cardiac output causes a reduction in blood pressure.

But, on long-term therapy, the decrease in vascular resistance rather than the reduction of cardiac output is responsible for reducing blood pressure. Another hypothesis proposes that decreased peripheral resistance results from additional properties of blood pressure-lowering medications, such as the opening of calcium-activated potassium channels, the inhibition of vascular carbonic anhydrase, and the indirect effect of sodium loss.

Some physicians recommend using a low dose of hydrochlorothiazide.

In the treatment of resistant hypertension, increasing the dose of hydrochlorothiazide (to as high as 50 mg) plays a very important role.

The risks associated with thiazide diuretics include hypokalemia and metabolic alkalosis. The adverse effect of hypokalemia is explained by increased sodium concentration in the distal tubular system, which causes the exchange and loss of potassium and hydrogen ions for the reabsorption of sodium. This mechanism is mediated by the aldosterone-sensitive sodium channels. The risk of hypokalemia is greater during the first 2 weeks of therapy, and close monitoring is warranted during this period.

Another adverse effect associated with thiazide diuretics is gout, which is caused by hyperuricemia induced by these drugs; gout is an indication to change to another class of drug. Other adverse effects include hypercalcemia (due to the inhibition of renal calcium excretion), erectile dysfunction, severe hyponatremia in some cases, increased risk of polymorphic ventricular tachycardia (due to potassium loss), alteration in lipid levels, and development of glucose intolerance.

There are some studies showing an increased risk of sudden cardiac death is associated with thiazide diuretics, especially at higher doses (greater than 25 mg daily dose of hydrochlorothiazide), but there is no conclusive evidence. The postulated mechanism of sudden cardiac death is the increased risk of ventricular fibrillation associated with potassium loss.

The ACE inhibitors include captopril, enalapril, ramipril, fosinopril, perindopril, trandolapril, and benazepril. This group of drugs inhibits the conversion of angiotensin I to angiotensin II (Figure 1). ACE inhibitors decrease blood pressure by reduction of sympathetic activity, arteriolar vasoconstriction, aldosterone production, and ADH secretion. The ARBs include losartan, candesartan, valsartan, telmisartan, irbesartan, and olmesartan. These drugs block the receptors that are acted on by angiotensin II. 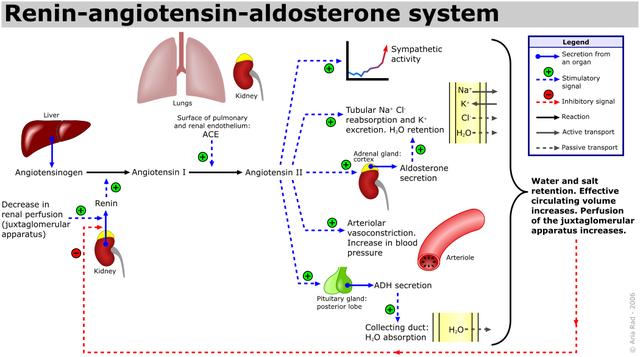 Main indication of ACEIs and ARBs

Given a choice between these two drug classes, an ACE inhibitor is prescribed first; if the patient cannot tolerate an ACE inhibitor, it is switched to an ARB. According to the newest recommendations, these types of agents shouldn’t be prescribed together. Drugs from these classes are used both as monotherapy and as part of combination therapy in the treatment of hypertension. ACE inhibitors and ARBs are drugs of choice in patients suffering from hypertension and diabetes because they decrease the progression of diabetic glomerulopathy.

These medications are also used in patients with heart failure or asymptomatic left ventricular dysfunction. Potassium loss in the urine associated with the use of a thiazide diuretic decreases with the addition of an ACE inhibitor or ARB; this is an advantage of using combination therapy.

ACE inhibitors can cause hypotension, acute renal failure, hyperkalemia (due to increase in angiotensin II), pulmonary adverse effects such as cough, angioedema, and anaphylactoid reaction (due to increased kinin production). ARBs have decreased risk of pulmonary adverse effects but increased risk of hypotension. Both types of drugs are contraindicated in pregnancy.

The drugs in this category include metoprolol, propranolol, atenolol, betaxolol, nadolol, nebivolol, penbutolol, carteolol, bisoprolol, penbutolol, and esmolol. Beta blockers decrease heart rate, cardiac output, and contractility of the myocardium. They also cause the reduction of renin secretion by blocking beta receptors present in the juxtaglomerular complex.

Generally, beta blockers aren’t used as monotherapy for hypertension initially except for specific indications, such as hypertension with atrial fibrillation or following myocardial infarction. They offer inferior protection against stroke; this is especially important as hypertension is one of the main risk factors of stroke.

Calcium channel blockers include: nisoldipine, amlodipine, isradipine, and clevidipine. This group of drugs causes arteriolar muscle relaxation (resulting in the decrease of peripheral resistance) by blocking the voltage-sensitive calcium channel. This blockage leads to a decreased transmembrane movement of calcium and thereby decreases the concentration of calcium required for contraction.

These drugs are used as monotherapy as well as in combination with other antihypertensive medications, and there are no special indications.

The adverse effects of calcium channel blockers include: headache, dizziness, variation in heart rate, constipation, ankle and leg edema, and gingival overgrowth. The short-acting calcium channel blockers, like sublingual nifedipine, are no longer used. Evidence shows that they offer no real benefit for controlling blood pressure in the long term.

This medication directly inhibits renin. But due to the increased risk of nonfatal stroke and kidney diseases, this medication is not recommended There is a warning issued by the FDA in the package insert for aliskiren.

This group includes alpha-receptor antagonists like prazosin, terazosin, phentolamine, doxazosin, and phenoxybenzamine. They are not recommended as monotherapy and are used as an add-on for patients with resistant hypertension. Some studies showed an increased risk of developing congestive heart failure associated with alpha-1 adrenergic blockers.

The phenomenon of first-dose hypotension, which occurs within 30 minutes after taking the initial dose of this class of drug, is a major precaution for this type of treatment. Tolerance to this adverse effect typically develops with long-term treatment.

Drugs with both alpha- and beta-blocking properties include labetalol (used in the treatment of hypertensive emergencies) and carvedilol. Examples of drugs that are centrally-acting adrenergic blockers include methyldopa, clonidine, guanfacine, and guanabenz.

Methyldopa is used in the treatment of hypertension in pregnancy. Some common adverse effects of methyldopa include sedation, depression, dryness of the mouth, hyperprolactinemia, decreased libido, and signs related to Parkinson’s disease. The clonidine suppression test employs clonidine to diagnose pheochromocytoma, which is one of the differential diagnoses in hypertensive patients.

Reserpine is an adrenergic neuron-blocking agent. These agents prevent the storage and release of catecholamines from the nerve endings, which results in pharmacological sympathectomy.

Monotherapy for hypertension is advised only if blood pressure is no more than 20/10 mm Hg above the target blood pressure. As already described, all classes of antihypertensive medications have almost the same efficacy. The ARBs/ACE inhibitors or calcium channel blockers are suggested as initial monotherapy because of the potential for employing drugs from two of these classes for combination therapy if needed.

If a diuretic is chosen, chlorthalidone should be the initial monotherapy because of its longer duration of action and better cardiovascular risk reduction. But, some doctors recommend low-dose hydrochlorothiazide for initial treatment in patients with mild hypertension.

Generally, the starting dose is half of the standard dose as defined in the pharmacopeia. Increasing the dose of a single drug in the case of monotherapy would increase the risk for adverse effects without any increase in efficacy (due to a flat dose-response curve).

Age and race are two factors influencing the efficacy of medications for hypertension. Younger patients have a better chance of responding to ACE inhibitors/ARBs and beta blockers, while patients who are black and/or older are more likely to respond to thiazide diuretics and calcium channel blockers.

When the blood pressure of the patient is above the target blood pressure by more than 20/10 mm Hg, consider adding a second drug. A combination of ACE inhibitor/ARB along with a long-acting calcium channel blocker is recommended for nonobese patients. In obese patients, the combination of a thiazide diuretic and an ACE inhibitor/ARB is recommended.

When monotherapy has failed to control blood pressure, some physicians employ sequential monotherapy. A different class of drugs is tried during the initial monotherapy. This approach differs from the routine practice of either increasing dose or employing combination therapy.

The practice of giving at least one antihypertensive agent used in combination therapy at night offers better nocturnal control of hypertension and decreased the risk of cardiovascular mortality. Conclusive evidence regarding this practice has yet to be established.