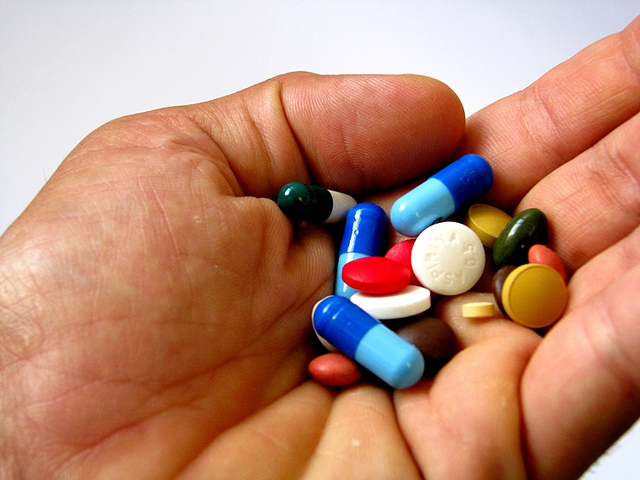 Clinical manifestations and the course of the infection depend on the patient’s age and immunological status, ranging from asymptomatic subclinical infections to life-threatening infections in immunocompromised patients. Primary infections tend to be more severe, with systemic signs and symptoms, while repeated infections usually show isolated local involvement.

After entry into the host, the virus reaches the epidermis/dermis, where replication starts. The virus then reaches either the autonomic or sensory nerve endings. After reaching a sufficient replication number in the nerve endings, the virus is transported intra-axonally into the cell bodies.

HSV viremia is another chief mechanism for the extension of infection with HSV-2.

In the case of HSV-1, latent infection is most commonly observed in the trigeminal ganglia. While in HSV-2 infection, the sacral root ganglia (S2–S5) are most frequently affected.

HSV infection may be a primary infection or an infection caused by reactivation of the virus:

When compared to recurrent infection, the primary infection has a longer duration of symptoms because it involves both mucosal and extramucosal sites. The incubation period for both types of HSV infection is 6–8 days.

The spectrum of HSV infection includes the following conditions: 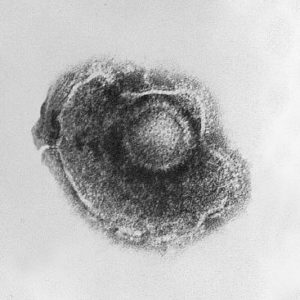 Image: “Electron micrograph of a Varicella (Chickenpox) Virus. Varicella or Chickenpox, is an infectious disease caused by the varicella-zoster virus, which results in a blister-like rash, itching, tiredness and fever.” by CDC/Dr. Erskine Palmer/B.G. Partin. License: Public Domain

Chickenpox usually occurs in childhood and presents as a characteristic rash with a low-grade fever. In a healthy child, this infection is usually self-limiting and benign, but it can be more serious in adults and immunocompromised children; in these cases, different prodromal symptoms, such as headaches, nausea, and myalgia, are possible, as well as serious clinical manifestations sometimes leading to death.

The structure of the virus is similar to the herpes virus, with a lipid envelope, icosahedral symmetry, and double-stranded DNA.

Herpes zoster usually occurs many years after the primary infection, manifesting as a typical vesicular rash affecting only one or two dermatomes and accompanied by pain, tingling, and altered sensations or sensory loss in the affected area. A common sequela of herpes zoster is post-herpetic neuralgia (i.e., persistent pain along the distribution of the rash).

Acyclovir is activated as follows:

Because virus-specific enzymes are required, acyclovir is activated only in infected cells. Some virus strains lack thymidine kinase and thus show resistance to acyclovir. In these cases, cross-resistance to famciclovir, ganciclovir, and valacyclovir also occurs.

It irreversibly binds to the viral DNA and causes chain termination.

There are three formulations of acyclovir available: oral, intravenous, and topical. Oral acyclovir is unaffected by food, but bioavailability is low (20%). Topical acyclovir can be useful in skin lesions and has the advantage of no systemic reactions. In HSV encephalitis, neonatal HSV infection, or other HSV and/or VZV infections in immunocompromised patients, intravenous acyclovir is a drug of choice.

Because the drug is activated only in infected cells, acyclovir is generally well tolerated. However, headache and gastrointestinal symptoms (nausea and diarrhea) have been observed. In some cases, intravenous administration can lead to acute renal toxicity (which is dose-dependent) and some neurological adverse effects, such as seizures and delirium. These adverse effects can be avoided by proper hydration of the patient during therapy.

Because of the possibility of renal toxicity, concurrent use of acyclovir with other nephrotoxic agents should be avoided. Cimetidine and probenecid increase exposure to acyclovir through decreased clearance of the drug. In patients receiving concomitant zidovudine, lethargy and somnolence are possible effects.

The use of acyclovir is contraindicated in those with previous allergic reactions to acyclovir or penciclovir. Kidney disease and massive volume loss are relative contraindications for acyclovir therapy because of potential kidney damage.

Valacyclovir is metabolized by first-pass metabolism into acyclovir. Oral valacyclovir has much better bioavailability than oral acyclovir.

Genital herpes, herpes labialis, and VZV infections. Valacyclovir is available only as an oral formulation.

Valacyclovir has almost the same metabolism as acyclovir, making it a safe medication. In high doses, symptoms like confusion, seizures, and hallucinations have been reported, but are rare. Gastrointestinal intolerance, thrombotic thrombocytopenic purpura, and hemolytic uremic syndrome are possible, but extremely rare.

Famciclovir is a prodrug that is metabolized to penciclovir through first-pass metabolism (deacetylation and oxidation).

Genital herpes, herpes labialis, and herpes zoster. Only available as an oral formulation.

Famciclovir should not be administered 24 hours before or 14 days after VZV immunization.

Penciclovir is an active metabolite of famciclovir, and it is available only as a topical agent. It is used in genital and labial herpes. There are no interactions and adverse effects are rare except for application site reactions (pruritus, mild pain, and transient burning) that occur in 1% of patients.

Docosanol inhibits viral entry into cells by preventing fusion between the viral envelope and the plasma membrane. It is used in the treatment of herpes labialis and is available only as a topical agent. Application site reactions occur in 2% of patients.

Mechanism of action: Trifluridine (C) inhibits DNA synthesis in HSV-1, HSV-2, CMV, vaccinia, and several adenoviruses. Similar to other abovementioned nucleoside analogs, it is phosphorylated intracellularly and then inhibits DNA synthesis by competitively inhibiting viral DNA polymerase. Trifluridine is not selective for infected cells, making it inadequate for systemic use.

Trifluridine (topical application only) is used in the treatment of HSV-1-associated or HSV-2-associated keratoconjunctivitis and epithelial keratitis.

Cutaneous application of trifluridine, alone or in combination with interferon alfa, is effective in acyclovir-resistant HSV infections.

Some palpebral edema and burning sensation happen in 1%–10% of patients.

Mechanism of action: Similar to other abovementioned nucleoside analogs, ganciclovir is activated intracellularly by the virus-specific enzyme phosphotransferase UL97 and then inhibits DNA synthesis by competitively inhibiting viral DNA polymerase.

Clinical uses: Ganciclovir is mainly used in the treatment of CMV infections, and it is 100 times more potent against CMV than acyclovir.

There are three formulations available: oral, intravenous, and an ocular implant.

When administered orally, ganciclovir has poor bioavailability, but oral administration is less likely to cause myelosuppression than IV administration.

In HIV patients, IV ganciclovir is used to delay the progression of CMV retinitis, and its effectiveness is increased when combined with foscarnet. IV administration is also recommended in immunocompromised patients suffering from CMV esophagitis, colitis, and pneumonitis.

Ocular implants are used in the treatment of CMV retinitis and must be surgically replaced every 5–8 months.

Myelosuppression is the most common adverse effect of ganciclovir, and it is usually associated with intravenous administration. Adverse effects like headache, gastrointestinal symptoms, rash, and peripheral neuropathy are also observed. Very rarely, toxicity of the liver and central nervous system may occur.

Foscarnet (phosphonoformic acid) inhibits DNA polymerase of herpesviruses, as well as RNA polymerase and reverse transcriptase of HIV. It does not need to be phosphorylated in order to be active. In the aforementioned enzymes, foscarnet blocks the pyrophosphate binding site; this results in the inhibition of pyrophosphate cleavage from deoxynucleotide triphosphates. Lack of or defects in enzymes such as thymidine kinase do not confer resistance to foscarnet.

CMV infections and acyclovir-resistant HSV and VZV infections. Because of its poor bioavailability when administered orally, the only formulation available is intravenous.

Renal impairment and electrolyte disturbances—hypocalcemia, hypercalcemia, hypophosphatemia, hyperphosphatemia, hypokalemia, and hypomagnesemia. The speed of administration has to be closely monitored and adjusted based on creatinine clearance. Genital ulcerations can occur because of the ionized drug present in the urine. Other adverse effects include gastrointestinal symptoms, liver toxicity, anemia, fatigue, and central nervous system toxicity (headache, hallucinations, and seizures).

Previous allergic reactions to foscarnet. Use in patients with previous renal impairment or in those receiving nephrotoxic drugs, such as amphotericin B, should be closely monitored.

Cidofovir does not require viral enzymes for phosphorylation to its active diphosphate, thus making it effective against the strains of CMV and HSV with or without a defective thymidine kinase. Cidofovir is an inhibitor of viral DNA polymerase, but it also acts as its alternative substrate, causing inhibition of DNA synthesis.

An intravenous preparation is used in the treatment of CMV retinitis.

The most common adverse effect is proximal tubular nephrotoxicity. Each cidofovir infusion must be titrated based on creatinine clearance and the presence of protein in the urine, and the patient must be hydrated during the administration of the medication. Ocular toxicity (uveitis, ocular hypotony) and neutropenia are possible.

Concomitant administration of nephrotoxic drugs (such as amphotericin B and aminoglycosides) should be avoided. Probenecid causes increased adverse effects and drug interactions.

Known hypersensitivity. Because of the possibility of severe renal toxicity, patients with previous renal impairment should not receive cidofovir.

Idoxuridine is a thymidine analog. Because it competes with thymidine, it gets inserted in the DNA, causing it to break. It is used for the treatment of HSV keratitis and genital and labial herpes. Only topical formulations (eye drops) are available. It is rarely used because acyclovir is safer and more effective.