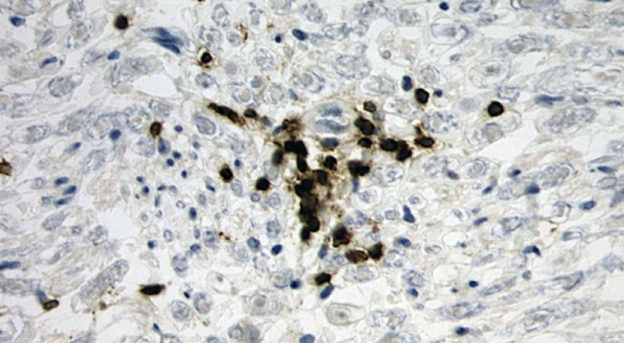 When a foreign organism invades the body, the immune system receives an alert. This is due to the presence of small glycoprotein antigens on the surface of the invading organisms, which the body identifies as foreign.

All cells carry antigens on their surface; the body can distinguish the different self- and non-self-antigens because of the selection process during birth and in the early years of life. Initially, due to the great diversity of DNA splicing and recombination, the immune system creates billions of different antibodies with a limited number of genes by rearranging DNA segments during B cell development, prior to antigen exposure.

This process results in the formation of lymphocytes that are complementary to every antigen, even those of the fetus. The body’s lymphocytes then mature and T cells are carried to the thymus, while B cells are sent to the bone marrow for further processing.

In these locations, respective lymphocytes are exposed to every antigen in the fetus. When a lymphocyte reacts, it is killed immediately. Thus, humans usually do not have lymphocytes that correspond to self-antigens.

The lymphocytes that remain will only attack foreign antigens. However, these lymphocytes are stored in numerous peripheral and central lymph node organs in an inactive state. An antigen needs to be transported to the lymphocytes in order to trigger their activation.

To perceive and fight the extensive variety of pathogens that an individual will encounter in their lifetime, lymphocytes of the adaptive immune system have developed ways to identify an incredible assortment of various antigens, including micro-organisms, infections, and many others.

The antigen-identifying parts of B cells are called immunoglobulins. These proteins are created by B cells in an array of antigen specificities, with every B cell delivering a specific immunoglobulin. Some of these are bound to the B cell surface and serve as the cell’s antigen receptor. They are known as B cell receptors.

Immunoglobulins of similar antigen specificity are released into the extracellular fluid as an immune response by mature B cells, the plasma cells. The discharge of antibodies, which bind pathogens in extracellular spaces of the body, is the fundamental effector capacity of B cells.

T cells, on the other hand, have antigen-recognizing proteins on their cell membrane, called T cell receptors (TCRs). These are very similar to the antibodies of B cells; they contain both V and C regions and are produced by a process of variability very similar to that of B cells.

However, T cells do not recognize antigens in the same way that B cells do. T cells need their antigens to be presented as short peptides, bound to special major histocompatibility complex (MHC) molecules. Only then will the antigens be effective and have the ability to activate the T cells. 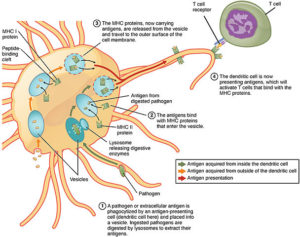 T cells only respond to processed antigens, which are short amino acid sequences called peptides. Thus, only those antigens that have been broken down into peptides will be effective in eliciting a response. This is called antigen processing (see image).

Once foreign organisms are phagocytosed, they form an endosome, which is fused with lysosomes that contain enzymes to kill and digest the organisms.

Antigens are conserved, however. They are transported to the endoplasmic reticulum, where they are processed to form small peptides. These peptides are then combined with MHC molecules and expressed on the cell surfaces. Thus, they are once again capable of activating T cells by attaching to relevant T cell molecules with complementary TCRs.

The function of MHC molecules is to bind and express antigen peptides—derived from pathogens—on the cell surface so that they are acknowledged by the appropriate T cells. The outcome is often injurious to the pathogens, with the common sequelae of infected cells being killed.

There are two major classes of MHC molecules, each with their own characteristics and functions (see table above). They both comprise two α- and β-chains from different sources. MHC class I molecules (see images below) consist of a heavy α-chain spanning the membrane, which is coded by MHC genes, while the β-chain is a light chain and is produced by the β-microglobulin gene. 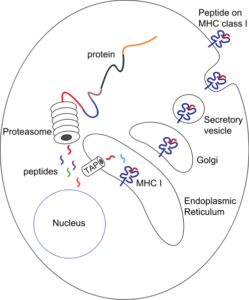 Image: Simplified diagram of cytoplasmic protein degradation by the proteasome, transport into endoplasmic reticulum by the transporter associated with antigen processing complex, loading on MHC class I, and transport to the surface for presentation. By: Scray. License: CC BY-SA 3.0

MHC class II molecules contain two chains that span the membrane; they are both coded for by MHC genes. 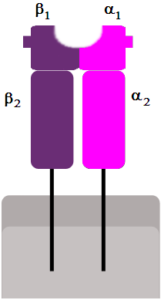 Both MHC molecules consist of a groove that binds the peptides; it forms a complex, which enables them to be presented to T cells. The groove is known as a peptide-binding groove.

These molecules also play a major role in determining the success of transplantation. This is because transplanted cells can act like regular antigens and stimulate an adaptive immune response. The MHC molecules are also often called the human leukocyte (HLA) complex, in the context of tissue matching.

MHC class I molecules are present on all nucleated body cells. They present those antigens that are present in the cellular cytoplasm. These can include foreign proteins, self-proteins, viral proteins, and others.

MHC class II molecules are only present on antigen-presenting cells. These include dendritic cells, macrophages, and B lymphocytes. These molecules are responsible for presenting antigens that are present extracellularly. This is done by phagocytosing the potentially harmful organism, degrading it, processing the antigen, and then presenting it to T cells.

Two separate properties of MHC molecules make it impossible for pathogens to avoid them. First, MHC is polygenic, as it contains a few distinctive MHC class I and MHC class II qualities; every individual has an arrangement of MHC molecules with varying specificities for different peptides.

Image: Polymorphism of MHC class I and II molecules. By: Lecturio.

Second, MHC is profoundly polymorphic; ie, there are multiple variants of every gene, giving rise to incredible diversity within the population (see image above and below). MHC molecules have the most polymorphic qualities known.

Image: The diversity of the MHC. By: Lecturio.

Once the antigens are presented on the cellular surface and bound to the MHC molecules, they need to activate the T cells. To ensure the attachment and action of these antigens, the T cells possess TCRs. These receptors are specific for specific antigens and bind the antigen attached to the MHC molecules, thereby stabilizing it. This allows the second messenger systems to come into play, which in turn activates the T cells (see images below).

The method of antigen processing occurs in two distinct ways, one for each type of antigen.

This pathway is used for the MHC class I molecules associated with endogenous antigens (see image below). The process begins with the ubiquitination of the endogenous antigens, which marks them for degradation by the proteasomes.

The proteasomes break these antigenic proteins into small peptides approximately 8–9 amino acids long; these are, in turn, transported with the transporter associated with antigen processing (TAP) complex into the endoplasmic reticulum. TAP is a member of the ATP-binding-cassette transporter family. It delivers cytosolic peptides into the endoplasmic reticulum (ER), where they bind to nascent MHC class I molecules.

At the same time, chaperone proteins within the rough endoplasmic reticulum help facilitate the proper folding of MHC class I molecules and β2-microglobulin. These partially folded MHC class I molecules are then associated with a TAP via another protein called tapasin. The molecules combine and are then secreted from the cell by the Golgi apparatus, to be displayed on the cellular surface.

This pathway is for the MHC class II molecules and is used by the antigen-presenting cells. Initially, proteins are phagocytosed and broken down by proteases in endosomes into peptides that are approximately 15 amino acids long (see image below).

In the rough ER, the naïve MHC class II molecules  (alpha and beta chains) associate with each other, and a third protein, called the invariant chai, stabilizes the complex. Without the invariant chain, the alpha and beta proteins will not associate. This chain, which trimerizes in the ER, associates with MHC class II molecules and is released from the ER as a 9-subunit complex.

This MHC-invariant complex passes from the RER to, and out of, the Golgi body. Before moving to the cell surface, the vesicle containing this complex fuses with the endosome containing the antigen peptides. Here, the invariant chain is proteolytically degraded and only a small part, the CLIP, remains attached to the peptide-binding groove.

The antigen peptide from the external protein associates with the MHC II molecule in the channel between the α-1 and β-1 domains. Another protein, HLA-DM, removes CLIP and allows the chain to start attaching to the peptide. The resulting MHC II-peptide complex proceeds to the surface, where it is expressed, ready for antigen presentation. MHC II molecules appear to be expressed on the surface of cells in pairs.

As the exogenous pathway can involve infection before presenting the antigens, the cross-presentation allows dendritic cells to process and present antigens without being infected. This allows the antigens to stimulate different T cells: the endogenous antigens stimulate the helper T cells via class II molecules and the exogenous antigens cross-stimulate the cytotoxic T cells via the class I molecules. However, not every antigen-presenting cell has the ability to cross-present.

Presentation of Lipid Antigens by CD1

Aside from the proteinaceous antigens, some cells also possess lipid antigens (see image below). These cannot be presented via MHC molecules. Instead, the body employs CD1 molecules, which are a non-polymorphic family of glycoproteins that are capable of presenting lipid antigens to T cells. These molecules have a unique binding structure that allows them to bind to and present a wide variety of lipid antigens.

The process begins by phagocytosis of the antigens into the cell. Lipases then degrade them into their smallest components. The CD1 molecule is present in the endoplasmic reticulum. The small pieces of lipid antigens are mixed and bound with CD1 molecules, which are then exocytosed to the cell surface. There they present their antigens to the T cells and natural killer cells.

Image: Presentation of lipid antigens by CD1. Image by Lecturio

The body is capable of expressing both lipid and protein antigens. The immune system is equipped to fight foreign invaders via complex and intricate processes.